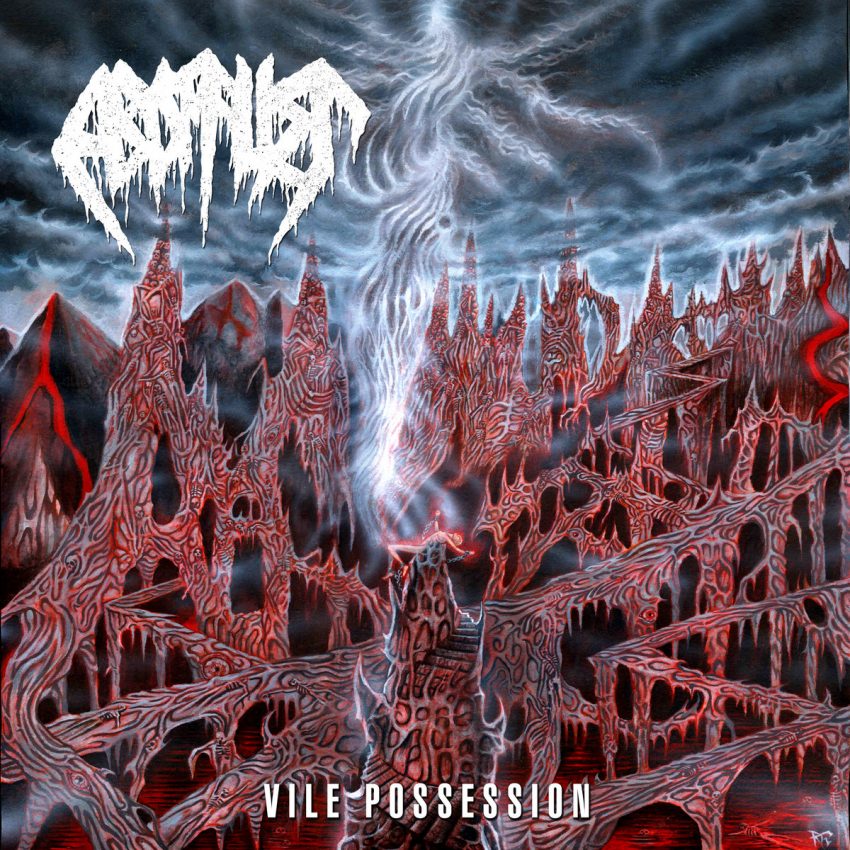 The world, as it spins now, is a place full of myriad different horrors waiting around ever my step. You can really pick your poison out there as for what horrific nightmare gets your goat at the moment. You’d be well within your rights to be scared stiff about mutating diseases, economic collapse, nuclear war, environmental degradation, or the continued existence of NFTs. With so much real, tangible dread in the world, escaping to a world where the horror is a little less than realistic can feel like a reprieve. Enter Abysmalist.

Formed in 2018, Abysmalist released its debut LP, Vile Possession, at the start of April. The horror-inspired six-track debut is a death metal sprint through the darker inspirations behind the band’s material and builds nicely off the band’s 2019 demo, Reflections of Horror. I recently talked with guitarist/vocalist Fred Avila about his band’s origins, killer debut, and future plans.

First off, how did the band get started? How did you three meet and decide to form this band?

Fred: The band was started by me (Fred-guitar/vocals) and Jeremy (Meir, drums) in 2017. At the time, we were both living in the bay area and playing in the band, Primal Rite. Jeremy and I would meet up before band practice and jam out my death metal ideas while waiting for the rest of the band to show up. Primal Rite’s schedule, combined with my move to Sacramento in 2018, pushed our death metal project to the back burner until 2019, at which time Jeremy also relocated to Sacramento. We resumed work on Abysmalist once we secured a practice space and then put our demo out through Caligari Records that summer. Due to the positive response we got from the demo and the fact that Primal Rite wasn’t doing much anymore, we decided to add a bassist to the Abysmalist lineup and become a live band. Bailey Lupo is a good friend and we lived together for years in San Jose so adding them to the band was an easy decision.

What got you guys into death metal in the first place and who are some of your influences?

Fred: I can’t speak for anyone else in the band but I think we all have similar stories that probably don’t differ from most people who do what we do. I started getting really interested in music at around age eight or nine. Definitely gravitated towards punk and metal pretty early on and from there it was just an ongoing quest to find faster, heavier, more aggressive music. I started playing guitar in 8th grade and started my first band a couple years after that. At this point I’ve been playing in bands, putting out records, and touring for over half my life.

For this band specifically I’d say our biggest influences are Bolt Thrower, Demigod, & the classic Peaceville 3. Y’know, just a lot of classic English and Finnish death metal from the late ’80s and early ’90s. Mostly Bolt Thrower though (laughs).

What’s the music writing process like for the band? Do you have a set process for that and has it changed at all as the band has gone on?

Fred: I’ll usually come to practice with a bunch of riffs and a rudimentary song structure and we’ll take it from there. Just jamming it out over and over again, trying out new parts and structures until the song eventually stops changing and we feel happy with it. Historically, it’s been a pretty slow process. Seeing as how we all live in different cities now I imagine that process will change going forward. The times that we do meet up will have to be much more intentional.

How do you come up with the lyrics for the band? Do you have any particular inspirations that you turn to? What, to you, makes an Abysmalist song from a lyrics and themes standpoint?

Fred: Being the sole lyricist for two death metal bands means I need to be able to write lyrics that are different from each other in order to keep it interesting. There’s a separation that happens in my mind. Unurnment’s lyrics are usually very personal and deal with themes of depression and mental illness. Abysmalist’s lyrics are usually more horror-related and focus more on the world outside my head. For the Reflections of Horror demo, I copped out and just retold stories from books that I’d read, sometimes even lifting exact phrases from those books. Namely, Clive Barker’s The Hellbound Heart and Patrick Süskind’s Das Parfum. Y’know, some real pervy horror shit.

For Vile Possession, I relied less on retelling other’s stories and decided instead to take some of the themes from those author’s books and make something a little more original out of them. There’s also some history in there with the song, “Therapeutic Exhumation”, my hatred for the cops/authority pops up in “The Redeemer”, and then there’s some good old classic pervy horror shit too in songs like “Possession” and “Euthanasian Benediction.” Obsession and heterodoxy are recurring themes in all of Abysmalist’s songs. The depraved depths that humanity will go to get what they want is a well, rich with lyrical ideas.

What was the writing/recording process like for Vile Possession? Were there any challenges to getting your first LP done? What was your goal when recording the debut?

Fred: The writing process was pretty casual. Jeremy and I met up, usually once a week in the studio, and just jammed out our song ideas until they were complete. Most of the album was written by the time Bailey Lupo joined on bass so it was really just a matter of teaching them the songs and getting tight enough to record. We started recording the album in 2020 after the start of the pandemic, mostly because there was nothing else we could do. I recorded the album in our practice space which I have since named, The Bludgeon Dungeon. It took longer than I wanted it to but I think we’re all pretty happy with the result.

How does it feel to have a full record done and out to the fans? It’s a hell of a debut and I imagine you guys have to be pretty proud of the final product.

Fred: It’s awesome. I didn’t put out any new music in 2021 so getting this album out after starting it almost two years ago really feels like an accomplishment. I’m constantly working on music and a lot of it never sees the light of day because I’m either not happy with where it’s going or I lose interest. Abysmalist being a “real band” definitely helps. This feels like a win for the team for sure.

Have you been able to play any of the new material live yet?

Fred: Well, we were supposed to play a short run of shows this past Easter weekend to commemorate the release of Vile Possession but we had to cancel at the last minute due to one of us getting COVID. It was a pretty hard blow seeing as how we haven’t been able to play live in two years. Jeremy moved to Seattle last year, Bailey has a pretty rigorous tour schedule with their band, Scowl, and I’m going to become a dad this coming June so it can be difficult to get us all in the same room these days. I’m really looking forward to rescheduling these shows but it might be a little while before we can nail something down.

How affected was the band by the whole COVID situation?

Fred: It affected us greatly. We’d spent all of winter 2019/2020 getting ready to make our live debut and then the world shut down shortly after our first show. I was really hoping to spend 2020 playing live as much as possible and then spend 2021 recording the album but COVID kind of killed the first part of that plan. We just shifted our focus on recording an album since there was nothing else we could do.

What has Maggot Stomp’s support meant to you as a band? They’ve got a really cool roster of extreme bands so I assume that must be a relationship that just made a lot of sense to you guys.

Fred: Maggot Stomp’s been super cool to work with. I’ve had a great experience working with Scott on with my band, Unurnment so having him put out the Abysmalist record was a no-brainer. Scott’s become a good friend over the past couple years and I know we can trust him to make our record look as badass as possible. He’s very patient, easy to work with, and isn’t afraid to shoot down a bad idea when he hears one. I basically just sent him the album once it was done and said, “Here it is. These are the labels I was thinking of asking to put it out but I want to give you first crack at it.” I believe his response was a simple “Let’s do it”.

Now that you’ve gotten the process for recording a record down and gotten it released, how much does that experience affect your plans for future releases? What have you learned going through the process that you’ll carry over to future recordings?

Fred: I’ve been recording bands in various home studios for about the past ten years now and I learn something new every time. Working with different types of bands and people with different levels of recording experience is really how I learn to adapt and strengthen my recording skills. If anything, I think I learn less when recording my own projects. At this point though, I can’t imagine going to a real studio and paying someone else to record my band. I just really like to be in control, set everything up the way I want, focus on getting good takes, and not have to feel rushed.

Lastly, what’s next for Abysmalist? What are your goals for the near future of the band?

Fred: What’s next is still kind of up in the air. I want to get out there and play some shows when our schedules will allow. I don’t think this will ever be a band that tours very heavily but doing some weekend trips to Southern California and the Pacific Northwest would be cool. I’ve got a decent job and a baby on the way so the band’s goals aren’t anything too lofty or aspirational. I’m 37. At this point I just want to drink beer and play music with my friends.