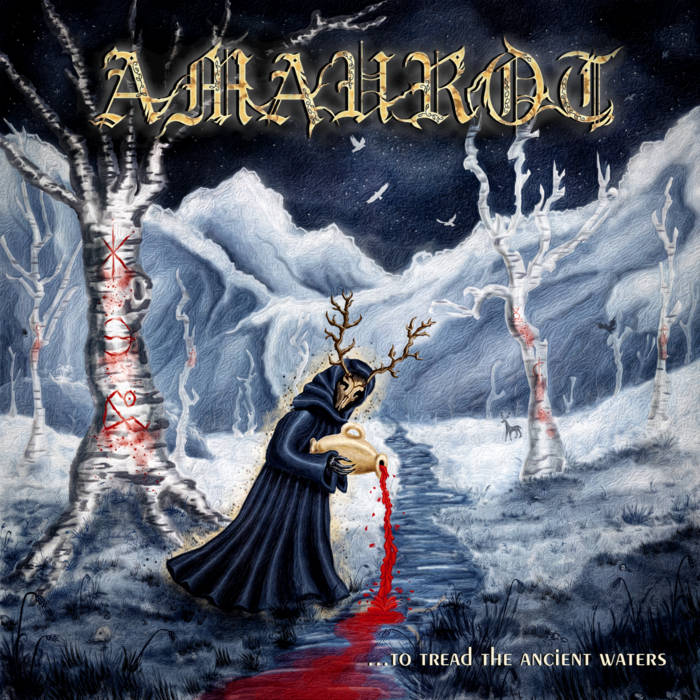 This year has seen a plethora of fresh offerings from new bands. There’s something undeniably exhilarating about hearing a debut and knowing that this is a band to watch out for. Whether a band can build off a promising first outing is another story but when the debut is all you have, and damn good at that, then the specter of a wide open future is a pretty thrilling prospect. With their first release, …To Tread the Ancient Waters, Amaurot has opened up a world of possibilities for a potentially very engrossing career.

Formed in 2019, Amaurot is an international band with members mainly based in Sweden and Germany. Helmed by vocalist Lisa Rieger of Hydra and Peter Svensson of too many bands to name, Amaurot is an international band with huge appeal. Their debut record proved to be a more than effective melding of doom metal sensibilities with gothic flair. I recently caught up with Peter and Lisa to get the scoop on what makes Amaurot such an exciting new act.

First off, what is the origin of Amaurot? How did the band get started and what, initially, did the band want to do from a musical standpoint? How did you come up with the name and what does it mean?

Peter: Amaurot got started in 2019 when I got in contact with Lisa through a Facebook doom metal group. We wanted to create a new band, doom metal but with some other influences. I would say that our main vision was something like in the vein of Draconian. Of course, we have our own twist based on all our other influences. I think that any new band needs to provide something new, otherwise you can just start a cover band. The name comes from the fictional capital on the island of Utopia, as described in the book Utopia by Thomas More. It has a good ring to it and I think it represents our music and thoughts well. There is an ideal that all humans have but it is “nowhere” to be found.

Lisa: After listening to rock and bands with clean singing, I needed to get used to harsh vocals first. My first purchases in extreme metal were Wintersun, Ensiferum, and Moonsorrow. I bought albums from Wintersun and Ensuferum because of the beautiful album artwork and I thought that Moonsorrow is a really interesting band name.

Peter: The songs basically start with me writing guitar riffs. Then I arranged them together with Lisa to fit her vocal melodies and lyrics. After that Thomas (Hedlund, drums) and Magnus (Hultman, bass) add their parts and we work together to make the best of each idea. I have played together with both Thomas and Magnus before so we know each other well. However, working with Lisa was a new experience. We are both very open and respectful. We quickly found a good way of working, which is also a lot of fun creatively. Sometimes Lisa takes my ideas in a new direction and creates something that I could never think of myself.

What’s the writing process like for the lyrics side of things? What do you try to do with the words to an Amaurot song and is there anything that you turn to in particular for inspiration?

Lisa: Most of the time I sit down and just listen to the instrumental. Then I record melodies and harsh vocal lines with bullshit lyrics, just with words that come to my mind. Afterwards, I think about the mood of the song and the emotions I get while hearing to find a fitting lyrical theme. Besides that, I find inspiration and creativity while walking in nature and sometimes, quite spontaneously, when I wake up at night.

What was the writing and recording process like for …To Tread the Ancient Waters? Were there any particular challenges to your first full-length recording? What was it like to actually sit down and listen to the final product?

Peter: Recording was pretty straightforward, for me at least, I am used to having bands recording separately. So once all the demo tracks were done, Thomas came to my home studio to record the drums. Magnus recorded his parts at his studio. We kept sending ideas back and forth during the recording. Lisa’s vocals were recorded by her husband Chris, who also did an excellent job mixing the entire album. Even if there were no major hiccups during the process, I think we learned a lot and I am really looking forward to working on new material! Hearing the album on my stereo while going through the booklet was a really cool experience and I am very happy how the album turned out.

The cover of that record is very striking. How did it and how much direction did you give them? What does that cover mean to you?

Lisa: Thank you so much, the cover artwork was done by me. The artwork means a lot to me because it reflects my visual concept of the songs and especially the lyrics/stories. If you look closely you can see that there are red runes painted on the trees in the landscape of the cover. I designed a unique rune for each song in the album.

I wanted to ask a few questions about specific tracks on that record. What was the lyrical and musical inspiration for the opener, “Aether Child.” To me, it’s a perfect start to the album that really sets the tone. Why did you decide to lead with that one?

Lisa: The lyrical inspiration for “Aether Child” is a very abstract one. I imagined that in every human being there is a sparkle of hope, something that gives the “drive” to live life. I imagined that [no] matter what we do in life or with our lives, in the end we all indulge to an eternal force.

I was also wondering about the musical/lyrical inspiration for “Starless Sky.” How did collaborating with Marcus Rosenqvist on that song come about?

Lisa: The lyrical inspiration for “Starless Sky” is about the feeling after a huge loss. Imagine saying goodbye to a dear person – full of pain you look up to a starlet sky, but due to your personal loss it seems just bland and dark.

Peter: Marcus and I play together in Void Moon, so when we got the idea to include a clean male vocal in the song, Marcus was our first choice!

What about the lyrical/musical inspiration for the closer, “Phoenician Ashes?” That’s an epic piece of music to finish out the record. Why chose that one to leave listeners with last?

Lisa: The lyrics drag with the sheer force of nature and that everything can be over within the blink of an eye. Peter came up with the song title “Phoenician Ashes” and I thought that title, which hints to the downfall of an ancient folk, would be a perfect fit for a song like this. In my opinion, the song is a perfect closing song because of its structure. It begins calm and intriguing and peaks with a long instrumental part filled with choirs.

Peter: When COVID hit we were still in the songwriting process of the album. Any plans of getting together and perhaps play a few shows before completing the album were put on the shelf. Instead, we focused on getting the material together and recording separately. The drums and my parts were recorded at my home studio. It was actually a good outlet to have Amaurot to focus on during the pandemic, so there was something to work for even if we didn’t know what the future would bring.

Being that you all are very active musicians, how do you find the time to spread across so many different projects? How important is it for you to have different musical outlets where you can express yourself in various ways?

Lisa: Creating music with Amaurot feels very relaxing, without a certain pace or pressure. I work on the project when it feels right and switch to other projects in between. Since we don’t play live anymore with my band Hydra (2019), I have more free time. For me, it’s very important to create different music and art. Every project of mine is completely different from the other. At the moment I am working on a new project in the metal section, a direction I have never released anything before. Exciting times!

Peter: Having different projects in different styles is a very good outlet for me. It gives me the opportunity to do different things and not limit myself to one style. Being creative and productive in one band always rubs off on the other projects I am involved in. Working with Lisa in Amaurot, which I consider to be a band and not a project, is great. She brings a lot of energy and creativity, which gives me more inspiration.

Being that you are split across a few countries, how do you all find time to work together and how do you keep a healthy band dynamic?

Peter: Me, Thomas, and Magnus live within an hour from each other so we meet regularly. Lisa lives in Germany so we are not able to meet and rehearse like a normal band, but we keep in contact on a weekly basis (sometimes daily).

Lastly, what’s next for Amaurot? What are your goals for the future of the band?

Peter: Right now, we are promoting the album. It is selling pretty good for an independent release these days! We will soon start working on new material and hopefully we can get some gigs and start touring properly!

Photo at top: …To Tread the Ancient Waters album cover.