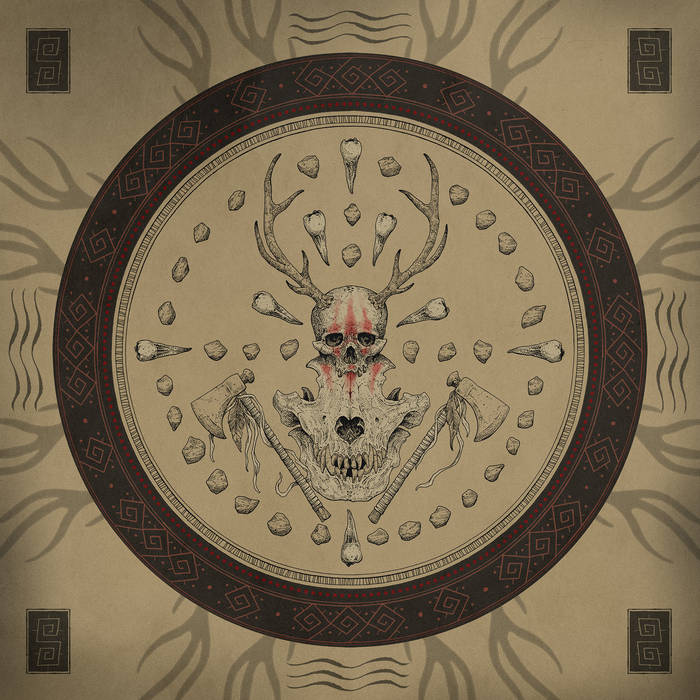 Extreme metal desperately needs bands like Blackbraid. There are so many bands starting out or stumbling out of their infancy that all end up sounding, if not the same, pretty damn close to it. There are only so many new ways you can do brutal death metal until it gets repetitive, for instance. That’s not to say that another old school death metal revival act wouldn’t be loved by me (let’s face it, it probably would) but someone making something truly original within the bounds of an established genre while putting their own stamp on the project, that’s the kind of band that extreme metal (and music in general) needs.

Releasing its debut LP, Blackbraid I, in August of this year, Blackbraid has burst onto the scene seemingly from nowhere. Formed by Sgah’gahsowáh (who also goes by Jon Krieger) in the Adirondack Mountains of New York, Blackbraid pays homage to Krieger’s heritage by incorporating Native American instrumentation and imagery into the music and heart of the band. That Krieger is able to seamlessly marry these influences to a more traditional atmospheric black metal sound is a testament to his skills as a musician. I caught up with Krieger recently to talk about one of this year’s most exciting debuts.

First off, what is the origin of Blackbraid? What made you want to tackle a solo black metal project?

Jon: I really just started Blackbraid as a way to put my art out into the world, I felt like I had some good songs and I wanted to share them so I created Blackbraid.

Jon: I honestly do not remember the exact context in how I came up with the name but I feel like it is a fitting name for the project. I think I had a handful of names I was looking at originally but Blackbraid was the only one that really stuck.

Jon: I’ve been listening to black metal for most of my life, since my early teens and I am in my 30s now. I think some of the first black metal bands I heard that really got me to dig deeper into the genre were bands like Dissection, Gorgoroth, Satyricon, etc…

What other band/music experience do you have prior to Blackbraid or is this your first project?

Jon: I have been playing music most of my life and played guitar in some projects of friends in the past but nothing too serious, Blackbraid is my first solo project.

Jon: I don’t really have a set process, it changes all the time. A lot of the time I will start with guitars first and then build the rest of the song around that, but sometimes I will start with something else like lyrics. Really whatever I’m feeling at the moment I guess.

What’s the writing process like for the lyrics side of things? What do you try to do with the words to a Blackbraid song and is there anything that you turn to in particular for inspiration?

Jon: The lyrics take the longest out of everything because I feel like they really bring meaning to a song and can help connect the audience with where I’m coming from as an artist. Blackbraid is heavily based in nature and I draw a lot of my inspiration from nature as well but, like I mentioned before, I don’t really have a set process for writing lyrics, I just write them as they come.

I absolutely love the combination of Native American instrumentation into the traditional atmospheric black metal sound. It makes for a combination that you really don’t hear too often but that melds together amazingly well. To me, combining those different types of elements and worlds is what makes music so great. Were there any challenges that you faced in putting those different elements together to make a cohesive piece of art?

Jon: Honestly, there’s not really many challenges there. I think the flute already fits pretty well with black metal when used in moderation, and it seemed to fit pretty perfectly in the songs that I had written so including it was an easy decision.

What was the writing/recording process like for the debut, Blackbraid I? How did the process go for you and how happy were you with the final product?

Jon: For Blackbraid I, I wrote the album slowly across a few months time, song by song. My good friend Neil Schneider recorded, mixed, and mastered the whole album and he has a studio in his house so the whole process was very easy. I just go over there and work with him a few hours every couple of weeks until the album is done and that was it.

I wanted to ask about the lyrical and musical inspiration for the song “The River of Time Flows Through Me” came about from a musical standpoint and where you got the ideas for the lyrics on that one? That’s a hell of a great opener for an album!

Jon: When it comes to the songs and the lyrics, I don’t think there is anything I could ever say that could come close to conveying what they mean to me, it is much better to listen to the music and let them speak for themselves I think.

The cover for that album is really memorable and I really dig the imagery and colors used there. Who did it and how much direction did you give them for what you wanted? To you, what does that cover represent?

Jon: The cover was done by Adrian Baxter, he is awesome. I gave him a bit of direction but still gave him a lot of freedom. I really just wanted something that I felt embodied the first album and I think what he came up with was perfect.

You made a really striking and memorable video for “Sacandaga.” How did that come about and what challenges were there to getting those done?

Jon: That video we actually shot over the course of several months so it was pretty laid back. We started it in the spring when there was still snow on the ground for the winter shots, we collected a bunch of other nature shots throughout the spring and summer, and then we filmed the guitar and bonfire shots at our house in the summer to finish it up. So it was overall pretty laid back because my wife did the whole thing and we took our time over a few months to put the thing together.

Being unsigned, was it difficult to get the album done or do you feel like it gave you more freedom in the creative process?

Jon: I think it gave me a lot of freedom honestly. I had a good amount of offers that I turned down in order to stay independent.

What is the metal scene like where you live in the Adirondacks and has that shaped you as a musician?

Jon: Where I live is the middle of nowhere and there is no metal scene. There’s barely any people at all here, you would be lucky to find a local pub that has live country music one night a week. Unfortunately, I have to drive a few hours if I want to see a good metal show for the most part.

Lastly, what’s next for Blackbraid? What are your goals for the future of the band?

Jon: I really want to branch into some international shows with Blackbraid in 2023, and I will release a second album within the next year as well!