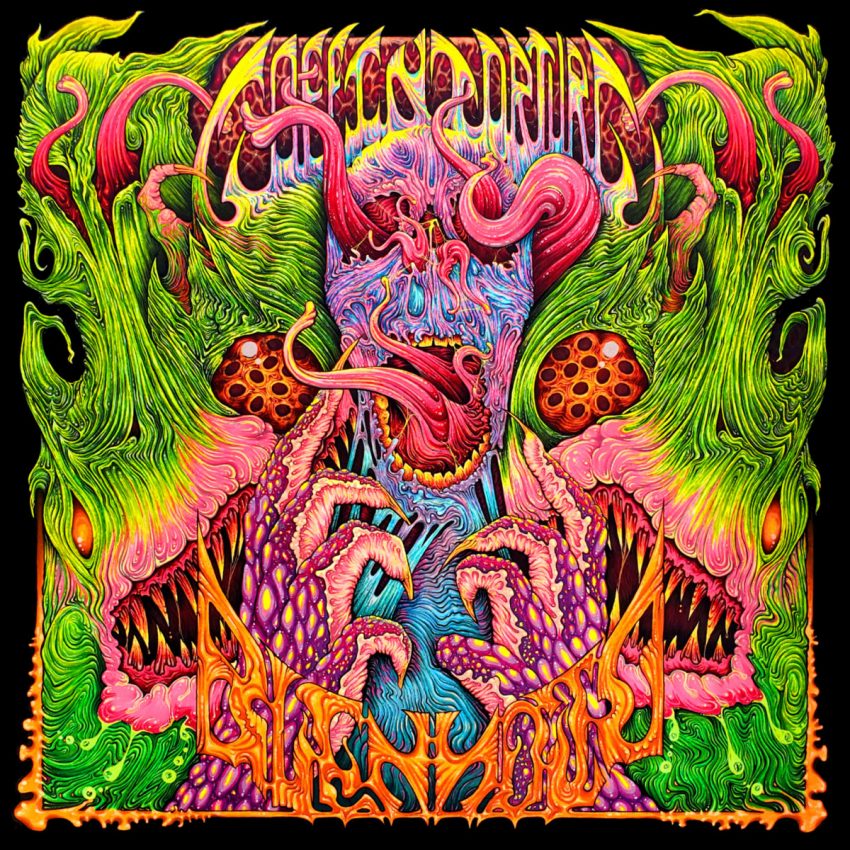 Torture and metal kinda go hand in hand, don’t they? Whether it’s death metal bands singing about gruesome ways to elicit pain or black metal bands putting various implements of suffering on an album cover, methods of making humans scream and squirm fit very well within the confines of music’s most extreme genre. Hell, arguably the flagship band of the whole genre is name after a torture device. Suffice it to say, South Carolina’s Coffin Torture is a band in good idealogical company.

Formed in 2006 as Tsavo, Coffin Torture has put out two strong doom records in 2018’s Dismal Planet and this year’s Blennoid. The most recent one is one of the better doom releases from the year and showcases Coffin Torture taking a leap forward in terms of production and composition. Even if the music isn’t your thing, there’s also one of the most unique and memorable album covers of the year on Blennoid to occupy your mind. I recently talked with drummer/bassist Blind Samson about the band’s history and killer new record.

First off, what is the origin of Coffin Torture? How did the band get started and what, initially, did the band want to do from a musical standpoint?

Blind Samson: We got started in 2006 as Tsavo. Tsavo became Cave Dweller and finally Coffin Torture in 2008. We started by just trying to figure out songs we liked and that eventually morphed into writing our own stuff. The goal from early on was maximum heaviness.

How did you guys come up with the name?

Blind Samson: Alex (Thorfinn) came up with the name. I can’t remember exactly where he read about it or saw a documentary about it, but coffin torture was a medieval form of capital punishment in which the condemned was put in a cage the size of a standing man and left to die of starvation.

What got you guys into extreme metal in the first place and who are some of the bands that got you into the genre?

Blind Samson: Early influences were bands like Nile, Sepultura, Mastodon, and Cannibal Corpse, then as time went on, we both discovered more obscure bands like Catacombs, Moss, Zoroaster, Ahab, Coffins, and Warhorse.

What’s the writing process like for the lyrics side of things? What do you try to do with the words to a Coffin Torture song and is there anything that you turn to in particular for inspiration?

Blind Samson: Most of the lyrics are inspired from one of three things: a movie, reading about unexplained events/phenomena, or seemingly mundane things twisted into something grotesque.

I’m always interested in how bands got the opportunity to record their first album and what that process was like. How did getting to make Dismal Planet come about and how much of a learning experience was the process of writing/recording that one? What did you learn making that album that you took to future recordings?

Blind Samson: We had never recorded in an actual studio before recording Dismal Planet. We had no idea how it would be, but it turned out to be fun. It was a huge learning experience. We saved up for a while and paid for three days at the Jam Room in Columbia, SC. The first day, we tracked the drums and one side of guitars, the next we did the second side of the guitars, bass and vocals, and the last day just mixing.

You guys have a slew of EPs, live albums, and a compilation before your first LP. Do you feel like recording those releases helped prepare you to make that first LP or do you ever wish you had gotten that one done earlier in the band’s life?

Blind Samson: I wish we would have gone to a studio to record the early stuff. It’s ok, but we had no idea what we were doing and the sound of the first EPs we released is awful. They did help us figure out how to write songs. I just wish we would have waited to release that stuff until we had something that sounded decent. I like the live recordings though.

What makes you two work so well together and how do you keep a healthy band dynamic?

Blind Samson: I think it’s because we have been friends for so long. We both have full-time jobs and we have never treated the band like some business that we have to take deadly seriously. We just have fun with it.

What was the writing/recording process like for the most recent record, Blennoid? How happy are you guys with the final product?

Blind Samson: It had its ups and downs. Spent a long time writing it and practicing the songs until we had them as tight as possible. The pandemic happened right in the middle of that. We saved up to get five days at the Jam Room and recorded with Phillip. We crammed more stuff into Blennoid than we could on Dismal Planet, so there was a lot to do in those few days, but it turned out great! I think the end result sounds like something that took much longer than a week to record.

I wanted to ask about the lyrical and musical inspiration for a few songs on that album. Could you tell me how the song “Budo” came about from a musical standpoint and where you got the ideas for the lyrics on that one?

Blind Samson: “Budo” musically came from listening to a lot of traditional Japanese Shamisen music. I used a banjo with three of the strings removed to make a redneck Shamisen and wrote this intro piece. Alex wrote a riff that matched the Shamisen part and the rest of the song developed out of that. Lyrically, Budo was inspired by the martial arts documentary Budo: The Art Of Killing.

“Crawling Spleen” is another favorite of mine (and a kickass title). Where did the musical and lyrical ideas for that one come from?

Blind Samson: “Crawling Spleen” was one of the earliest songs we wrote as Coffin Torture. It was just two riffs at first, then at some point Alex came up with the bridge parts. Lyrically, it was inspired by an episode of the cartoon that we both watched growing up called The Angry Beavers. They were watching an old horror movie on TV called The Crawling Spleen and when we were trying to come up with an idea for what to call the song, Alex said “How about Crawling Spleen?”.

“Yateveo” is another song I really dig from there. Could you talk about the inspiration for that one

Blind Samson: “Yateveo” is a Spanish phrase that means “Now I see you.” It was the name of a man-eating plant in Central America described in James W. Buel’s book Sea and Land. The song is about a person being sacrificed to the plant.

The cover to that record is one of my favorites from this year. Who did it and how much direction did you give them?

Blind Samson: Alex did the cover. He also did the cover for Dismal Planet. As far as direction, it was totally his concept. It has elements from all the songs in it.

Blind Samson: We don’t play live very often anyway, so it didn’t affect us the same way it did touring bands. Even before the pandemic, we were only playing around five shows a year. It definitely held us up from getting to go record Blennoid, but at the same time that was ok. It gave us more time to work on it and get everything exactly how we wanted it to be on the final recording.

What’s your local scene like there in South Carolina and how has that shaped the band?

Blind Samson: There are some great heavy bands around. It’s so hard to keep a band going and many of them have had a bunch of setbacks, but there is a nice variety of underground music in the area. They have impacted us tremendously with their friendship and by including us on shows. We are from a town that’s in the far northwest corner of SC so we have always been kind of isolated up there, but there were Greenville/Spartanburg area bands that put us on shows early on and made us feel part of them. Bands like Black Hand Throne, Waft, Adimiron Sphere, M.E.H., Tar Hag, and Divulgence.

Lastly, what’s next for Coffin Torture? What are your goals for the future of the band?

Blind Samson: We are currently writing our next album. Hoping to have it completed and ready to record sometime next year. Also, Blennoid will be released on vinyl in February 2023. We just want to keep writing heavy riffs and playing shows when we can!