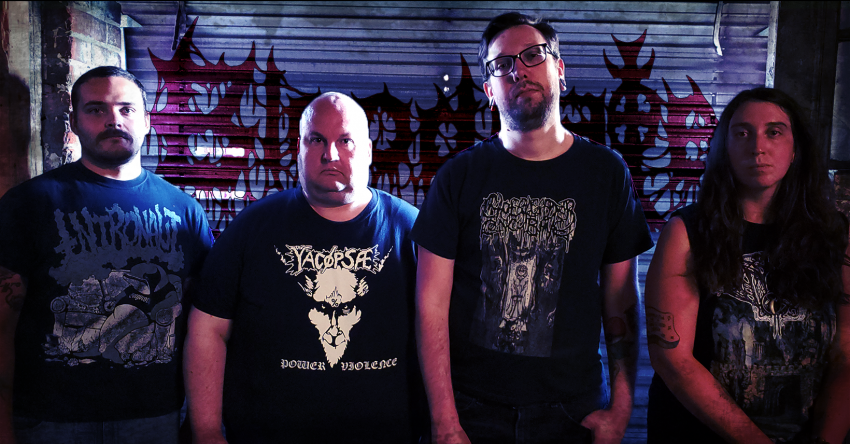 This year has already been a fruitful one for metal fans. There has been a slew of exciting debuts, groovy new releases from old favorites, and welcome returns either planned or already out from bands that fans have been dying to hear from again. In late March, Ohio-based Bloodgate made their triumphant return with the excellent Solace in Mourning. The album, the second from the band, sees a revamped lineup killing some of the most effective tracks of the band’s career so far.

Bursting onto the scene in 2016 with their debut EP, Constructing the Bloodgate, the band followed it up with a solid debut, Ambush and Destroy, in 2018. Following a four-year hiatus, the band’s return this year is a most welcome one. I recently chatted with vocalist Scott Jorgensen about the band’s history and what’s fueling the creative fire of the resurgent group.

How did the band come about? How did you guys meet and what made you want to form a band playing this type of music with each other?

Scott: Eric, the drummer, started the band with an ex-member named Matt. They found me on Craigslist and it just kind of snowballed from there. The band has had several line up changes over the last few years but we’re in a good spot now.  Everyone enjoys what we are making right now, which is the most important part.

What got you guys into extreme metal in the first place and who are some of your big influences?

Scott: I got into extreme metal when I was around 13. I would say bands like Napalm Death, Mutiilation, and Nasum were my early influences.

I usually see you guys described as blackened thrash, which is as good of a label as any, but genre classifications can be pretty limiting. How would you describe your sound and how did you know this was the style you all wanted to play?

Scott: Yeah, I think it’s just the closest thing to describe what we do, but we have a lot of grind, punk, and death metal influences as well. It’s really all over the place in regards to what sort of influences we’re drawing on, but that’s part of the fun of it all. We didn’t really come into this with a specific genre in mind, we start writing and see what comes out.

What’s the process for writing the music like? Has it changed at all over the years?

Scott: The current iteration focuses a lot on more communal song writing. Someone brings in an idea and we’ll start workshopping it to see if we have anything. If we’re all feeling good about it, then we’ll start fleshing it out into a full song.

What’s the lyric writing process like? Do you turn to any particular inspirations or have a process for getting the words to come? What themes are you most drawn to and why?

Scott: I usually like to start with a riff or rhythm in mind. It gives me some ideas on my vocal structure. A lot of my inspirations are things like old sci-fi novels, ’80s anime, and old fantasy sword and sorcery stories. It’s what I grew up enjoying, so it’s a comfortable spot for me to draw influence from.

How affected was the band by the COVID pandemic, either in getting music recorded or in playing live? I know there’s a four-year gap between your records, was that pandemic related?

Scott: Most definitely. During Covid we had two former members leave to focus on other things and, overall, it kind of put a damper on the creative process we were in the midst of at that time. The rest of us regrouped and welcomed Jessi, our bassist, into the fold and we began writing again in earnest. We hope that we’ll be releasing material more frequently now.

What was the writing/recording process like for the new record, Solace in Mourning? How do you feel about the final product? I imagine the positive reviews it’s been getting have to be extremely gratifying.

Scott: Like I mentioned earlier, Jessi was new to the band and this was first record with Zach as the sole guitarist and primary songwriter so we just started tossing ideas around. I really wanted to focus on this new version of the band, so we scrapped everything we had been working on previously and took things in a different direction.  I enjoy the final product, it’s a work of a certain time and place in the evolution of Bloodgate. We’re all happy to see that there are other people who enjoy it as well.

Do you feel more comfortable getting what you want out of your time in the studio now that you have a few albums down? How do you feel you’ve grown and evolved as a band between the records?

Scott: Personally, I’ve definitely gotten better with the band dynamic and where to focus my time, lyrically. I have a habit of writing myself into a corner sometimes, or just writing too much. I think my vocals on this album are a lot better than previous recordings. I had a terrible throat issue during our last studio recording, Ambush and Destroy, that I’m surprised I even got that one done. As a band, I think we just work well together. It’s easy to write and explore ideas with people you feel a strong musical chemistry with.

Have you had the chance to play live yet? If so, how did it feel to finally get back to it and what was the reaction to the new material?

Scott: Yeah, we’ve played a couple of shows with the new lineup and new material. One of my main motivations in a band is to perform live. The best part of writing new material is playing it out for the first time.

The cover for the new album is very understated and works well with the themes and music of the record. Who did that one and how much direction did you give them? To you, what does that cover represent?

Scott: Thanks, I actually made the album cover this go-around. I listened to the album ad nauseam and made an image that resonated with me. The album contains themes of war, loss, and death, so I wanted to try and explore some of the quieter emotions of those themes visually. Nothing too extreme or flashy, but something to convey an overall feeling of isolation.

Ohio has a pretty strong extreme metal scene, at least it looks like that to me from a distance. What’s the local scene been like for you and has it shaped the band in any way?

Scott: Yeah, the local scene here in Cincy is really diverse and vibrant. There are a lot of great bands and even better people. That has definitely helped us to keep pushing forward and to continue to grow as a band.

Lastly, what’s next for Bloodgate? What are your goals for the future of the band?

Scott: Well we have some shows coming up in Troy, OH; Youngstown, OH; Rochester, NY; and Philadelphia, PA. After that, we’ll get home and start writing again. We hope to have something new for everyone before too long.