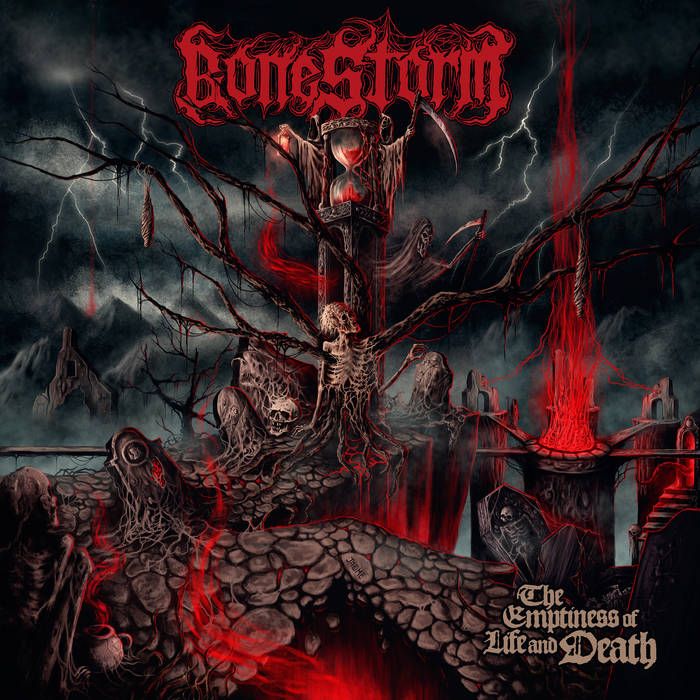 Anyone that loves metal knows that South America does metal better than most places on the globe. Whether it’s Sarcófago, Sepultura, Mystifier, Abhorrence, Krisiun or any of a myriad of other killer bands, our friends near and south of the equator know a thing or two about making maniacal metal. Bands across the continent have spent the past decades taking standard metal genres such as thrash or black and adding their own unique flair to the sounds of those styles to make them their own. Since 2006, Colombia’s Bonestorm has been doing the same thing with death metal.

Bursting onto the scene with their single “The Black Plague” in the mid ’00s, Bonestorm has put out two killer records, 2014’s Hidden Horizon and 2020’s The Emptiness of Life and Death. The two records showcase Bonestorm’s own spin on death metal with lyrics probing the depths of humanity and inner struggles. It’s a weighty mix that a lesser band would struggle mightily to pull off. Fortunately, Bonestorm is no lesser band. I recently caught up with vocalist/guitarist Carlos Jácome to talk about the origins of Bonestorm and what fans can expect from the future of the band.

First off, what is the origin of Bonestorm? How did the band form and what was the journey from putting out that first single and demo to getting the first album out in 2014?

Carlos: The band was born in 2006 with the idea of executing death metal, [and] from that year until present, the band has had some changes in its lineup and style, but we have always stood by the traditional death metal vein. Ever since we released our first demo, we have learned lots of things on the way, and still continue to do so, always trying to enjoy the ride offered to us through the music and the band. Hidden Horizon was our first EP released in 2014 by the French label Headless Cross Records (today Epidemia Records). It was a great experience because this record put together the new ideas that we (drummer Roberto Angarita and I) had back then as a band, in both the conceptual and the musical side, and that have been evolving bit by bit since then.

What got you guys into death metal in the first place and who are some of the bands that got you into the genre?

Carlos: Colombia, our country of origin, has always been a violent nation, and that, in most of the cases, has inspired many metal bands. Among them, Masacre, one of the most iconic bands of our country and a big influence in our beginnings. We started leaning towards death metal when we discovered bands like Sepultura and Slayer, which we eventually noticed, had a big impact on other bands we found later like Vader, Cannibal Corpse, Deicide, etc. Death metal, in terms of influence, is really vast, but I feel that what we’re currently doing has somehow been sculpted by the sound of bands like Obituary, Death, Deicide and bands of European metal like Bloodbath, Entombed, Pestilence, Bolt-Thrower etc.

The current lineup, to me, seems to really fit together well. What makes this particular group work so well together? What have you looked for in potential new members when there have been openings?

Carlos: Nowadays we have a stable line up. Daniel Valdés (lead guitar) and Carlos Escobar (bass and backing vocals) have been an excellent support for the group. In my opinion, when you’re in a band, what you’re looking for is to enjoy the moment and count on passionate musicians that have a good attitude and are focused on making their contributions to the band.

Carlos: The way of composing is something that remained the same throughout the years. Usually, I come up with ideas for riffs and rhythms, which I simultaneously record and turn into mockups. Then, the drummer steps in and refines the rhythmic parts with his own ideas. After we put together a “solid” mockup of the track, it’s shown to the other members so they can learn it and make their contributions in terms of bass line, solos, arrangements, etc. Then we put everything together and continue improving the piece until we consider it finished.

What’s the writing process like for the lyrics side of things? What do you try to do with the words to a Bonestorm song and is there anything that you turn to in particular for inspiration?

Carlos: The lyrical themes can vary a bit, including stuff like humanity, existentialism, death itself, mythology, etc. Some lyrics are inspired by personal points of view and others are inspired by tales, theories, visions, etc.

Having been doing this for more than a decade, what keeps you coming back to the world of death metal and to this band in general? What makes being involved with Bonestorm something that you’ve wanted to do for such a solid chunk of your life?

Carlos: I would say the passion for music [is] something I cannot leave aside. Metal has kept me company for a larger period of my life, since I was a teenager, and has always been there for me; I have a lot of respect for it. Listening to music and playing an instrument are fascinating things, and like any other passion, you just can’t get rid of it. In the other hand, I’m a graphic designer (www.jacomeartworks.com). I work directly with the metal world, creating album covers and artworks for metal bands. That built a strong bond between me and metal as well.

From the time you joined to the point you’re at now, with multiple full-lengths under your belt, how do you feel that the band has grown and evolved? How do you feel that you’ve grown as a vocalist? Has your approach to doing vocals changed at all?

Carlos: I feel the band evolves every time we write and release something new; I have learned a lot about technology, gear, production and many other things during recording sessions. Also, when you’re in constant activity, you gather a lot of experience. Regarding the vocals, I have always strived to keep a strong guttural voice, trying to enhance the technique in time, but always keeping it guttural, which I consider an essential asset in death metal.

What was the recording process like for the most recent album, The Emptiness of Life and Death? How happy were you with the final product on that one? I imagine the strong fan reaction had to be gratifying.

Carlos: Our most recent album was released in 2020, in the middle of the pandemic. We tried to do the best we could, with the tools we had at hand and within our financial capabilities. In general, it was highly satisfactory, we are happy with the result, and like in any process, we learned things that aim to do better next time. The acceptance of the album in our country was great. We were able to distribute the physical version of the record without issues, and right now we’re doing what could be the last series of gigs related to its promotion. We also had the chance of releasing another edition of the record in México, under the label Concreto Records, this helped spread our music within other territories.

Carlos: Regarding live performances, when the pandemic began, just like it happened to most of the artists, bands, or events that required public [interaction], it was absolutely complicated; everything was closed [and] there was a lot of uncertainty. Fortunately, everything is gradually going back to normal. Concerning the recording, we didn’t have major issues due to the fact that everything had already been recorded in 2019; the drums were recorded in a professional studio, and the other instruments were recorded in my home studio by the end of that same year.

Here in America, people can still be pretty conservative about words and imagery used in music. Have you guys ever faced any backlash to your lyrics or the covers to your work? By using more extreme imagery and wordplay, are you the type of guys that enjoy getting a reaction out of the type of people that would be offended by your work?

Carlos: I think not, we are actually not looking for any kind of controversy or innuendo with our music and lyrics; it is what it is, what we consider we want to express, as of yet, we haven’t had troubles of that sort. In any case, what we do is an artistic expression, and the message we send is subject to an open interpretation, in the end this depends on the perception of each individual.

Carlos: The metal scene in Colombia is big and diverse, [and] there are bands of all sorts (heavy, thrash, death, etc.) and the music is in constant evolution. There are several rock and metal festivals where you can find local and international bands. We, as a band, are part of the local and national scene, and try to remain active in it.

Since death metal is such an extreme genre of music to both be a fan of and play, I’m always curious what people involved in the scene listen to outside of death metal. Who are some of your big non-death metal inspirations and is there anything (artist or album) that you guys are fans of that might surprise listeners?

Carlos: I think most of the inspiration we have had comes from death metal, but there are some black metal bands that I feel have been influential for us in a way, like Rotting Christ or Behemoth.

Lastly, what’s next for Bonestorm? What are your goals for the future of the band?

Carlos: Right now, we’re working on our next full-length, which will be overloaded with death metal. It will hopefully be released by mid-2023. We’re currently planning its concept, recording, and production. We aim to achieve a brutal record, in the death metal vein that we love so much and are passionate about. Brutal regards from Colombia, thanks again for the interview!

Photo at top: The Emptiness of Life and Death album cover.