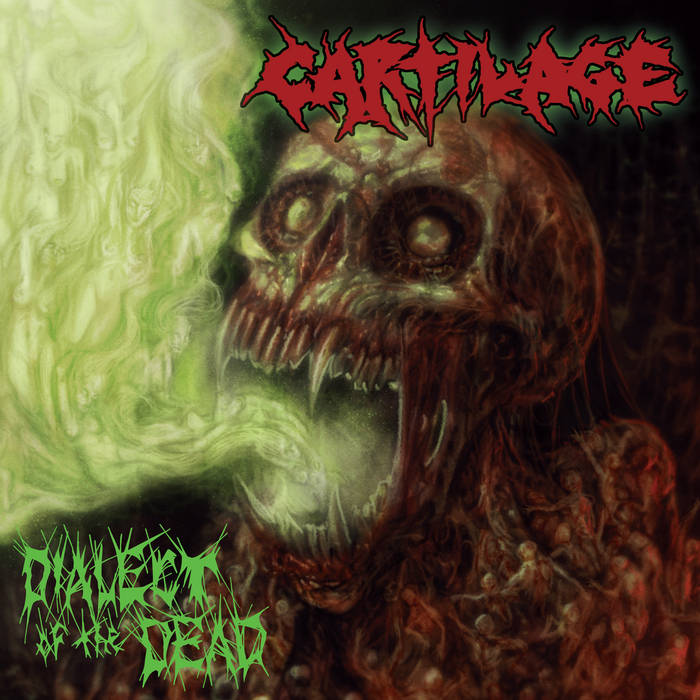 Gore, at least in the fictional sense, has a certain appeal to it, doesn’t it? There’s something about seeing buckets of blood and foot after foot of intestines thrown around in a scene that makes you (depending on the quality), laugh your ass off or feel sick to your stomach. It’s a time honored tradition within the worlds of horror and death metal to keep the blood flowing and the body parts flying. It can add a certain spice to a movie or a song to take a peek at what’s inside all of us. After all, we’re all made out of the same blood, guts, and cartilage, right?

Formed in 2014, Cartilage has honed its brand of grindcore infused death metal to the enjoyment of bloodthirsty fans the world over. Bursting onto the scene in 2015 with the demo, It’s Necrotic, Cartilage has built a steady following on the strength of the 2017 LP, Dialect of the Dead, and the 2020 EP, Gore-met. On the verge of releasing their second full-length, I talked to drummer Adam Houmam about the band’s history and all the gory details on what fans have to look forward to very soon.

First off, how did the band get started? How did you all find each other and decide to start this particular band?
Adam: The band formed December 2013 when my first band ION played with Mark (Wallace, vocals) and Mike’s (Flory, guitars) old slam death metal band Septicaemia together in San Francisco. Mark, Mike, and Ria (Teresa Wallace, guitars) approached me about their project idea, and of course I said yes! Shortly after we had our first jam, April 2014, with three songs already written for (the) It’s Necrotic EP.

What got you all into death metal and grindcore initially and who are some of your influences?
Adam: What got me into death metal and grindcore was mostly seeing what my older brother was listening to when I was really young, stealing his CDs and MP3s, because I always thought the extreme side of metal was funner to listen to. These days, the band Cartilage takes influences from Carcass, Exhumed, Impaled, but also we are huge into the late ’90s/early 2000s Unique Leader brutal death metal scene.

Your sound, to me, is definitely death metal but with definite grind and thrash inspirations mixed in. How important is it to you to incorporate different elements into the music and not pigeonhole yourself into one particular style? How would you describe the Cartilage sound?
Adam: The Cartilage tone has remnants of Carcass sprinkled all over the place, but the technicality of a brutal death metal band as well. We all have a core love for that kind of stuff. I like to blend in groove with technicality when it comes to my drum arrangements, just to spice things up a bit to not keep it as old school or traditional. If I were to copy the kind of grind beats that came out in the ’80s/’90s, it wouldn’t be as interesting to play or fresh to listen to. I also listen to a lot of jazz/fusion players such as Dave Weckl, Dennis Chambers, Billy Cobham, etc for inspiration on keeping it fun and interesting.

What is the music writing process like for the band? Has it changed at all as the lineup has shifted?
Adam: Since we all live within an hour of each other, we typically write together in the jam room still. Usually, Mike or Ria will send riff ideas to me and I can start thinking of cool drum patterns and arrangements prior to going in the room. Grateful that we can still meet up in a room because that brings out the best writing, in my opinion!

What is the lyric writing process like for the band? Do you have any particular sources you turn to for inspiration?
Adam: Lyrically we strive to make it tongue ‘n cheek with silly gross stuff thrown in there. B-rated horror films fuel this process.

I feel like you must be pretty big horror fans, based on the lyrics and covers, and it’s a genre that really goes hand in hand with death metal. What about the horror genre appeals to you? What are some of your favorites from the genre (books, movies, games, etc.)?
Adam: Each of us have seen a lot of horror stuff. We get down on some classic horror slashers, thrillers, mega-cheese ’80s stuff, and tons of gore. Some favorites: Dead Alive (Brain Dead), Re-Animator, Friday the 13th, Nightmare on Elm Street, The Stuff, The Thing, Robocop, Evil Dead, and whatnot. Mark and Ria love the Castlevania series. Ria, Kienan (Hamilton, bass), Mike and Mark also love The Last Podcast on the Left!

What was the recording/writing process like for your debut, Dialect of the Dead? As a band, what did you learn through that process of recording the first LP?
Adam: For our debut album, the writing process was all purely done in the jam room. We wrote for about two years in the jam room together, and then shortly after went in to Ear Hammer Studios in Oakland, California to record it. I remember we went in there with no click tracks, just myself and the two guitar players with me in the room at the same time, and basically recording all drums and rhythm guitar tracks in 45 minutes live at the same time. It was awesome!

What about the recording/writing process for Gore-met? Was it an easier process to get what you wanted in the studio with a full-length already under your belts?
Adam: Gore-met was written and recorded during the pandemic. For this one, we mostly exchanged guitar ideas via email and then met up every so often to work them out together. This was our first release where we used a click track to record everything, which made it smoothly for the others to track over as well. We recorded the drums for this EP in San Luis Obispo at our friends Matt Harvey and Alejandro Corredor’s studio, Darker Corner Studios, in a day, and then all other parts were done remotely.

Do you have any current plans for a new EP or LP? If so, how far along are you in the process and how is it going?
Adam: We just dropped an announcement for our upcoming album The Deader The Better that comes out on Creator-Destructor records this year on May 13, 2022!!!! Funny enough, this album has been recorded and shelved since January 2020. We had plans to release it that year, but since the world went to shit we held on to it until it was time to give it a proper release as well as touring and shows. Everything’s completed for the album, so keep them eyes peeled for the release on May 13!

You guys have really cool, horror infused and gory covers. Who does them and how much input do you give them beforehand? What, to you, makes an effective Cartilage cover?
Adam: Our first EP, It’s Necrotic, was something that our guitar player Ria Wallace hashed up in her backyard. Our album Dialect of the Dead was made by this guy David Romero who specialized in an airbrush style horror art. Gore-met and The Deader The Better were done by our good buddy Matt Slime, who also played live in Exhumed as well as his band Coffin Dust! An effective Cartilage cover consists of something of gore nature, but also little nuances that can reflect something off a B-rated horror film from the ’80s.

How affected was the band by the pandemic? Did it hurt any plans to get music recorded or any live plans?
Adam: The pandemic basically affected everyone, but to us it put us to a halt on releasing our album, The Deader The Better that was recorded January of 2020. But if it weren’t for that, we would have never put out Gore-Met, and now Deader is releasing this year in May 2022!

The Bay Area out there has always been such a strong area for producing great metal bands. What’s the local scene been like for you and how has the area shaped the band?
Adam: The local scene here has been steadily great for years. We are spoiled with the amount of sick bands that surround the Bay Area, with various genres coming out. Every week there’s always amazing shows happening all around. Thankfully, people dig the death/grind kinda style of music that we produce, and on top of that our silly stage antics seem to go well over here.

Lastly, what’s next for Cartilage? What are your goals for the near future of the band?
Adam: New album The Deader The Better out May 13, 2022 through Creator-Destructor Records!!!! Keep an eye on our socials for more news.