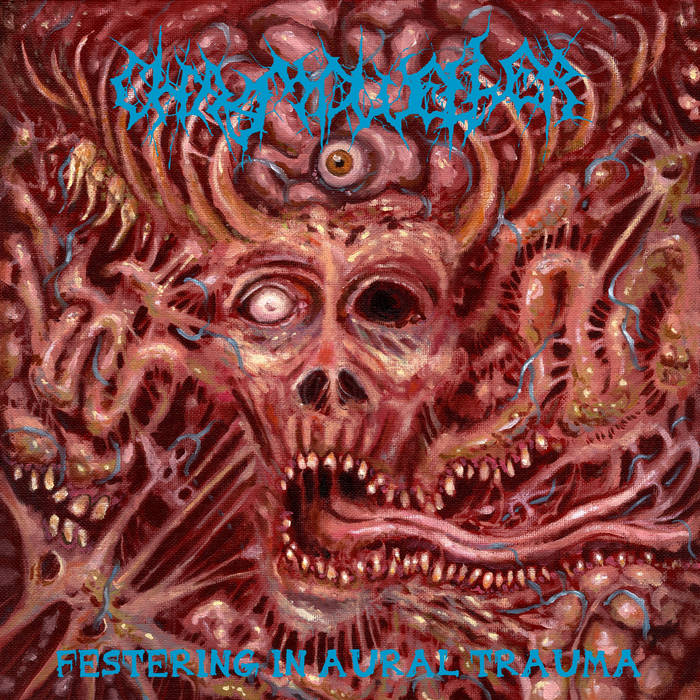 Nothing is guaranteed with a descent into a chasm. Maybe the dark, waiting maw of the ravine holds the promise of exciting geological formations to explore. Lost ruins hidden for centuries could sit undisturbed, resting in anticipation of the first human eyes to see them in years. If you’re not so lucky, death and evil might lurk in the darkness, sharpening their teeth and hoping against hope for someone foolish (and delicious) to plummet into its domain. Whatever dwells in the unknown, you could find far less deserving bands than Canadian death-doom band Chasmdweller to be your soundtrack.

Chasmdweller, which formed in 2019, has been putting out releases at a furious pace. Since forming, the band has dropped three LPs and four EPs, including this year’s Festering in Aural Trauma. The band’s unique mix of death and doom metal has stayed consistently fascinating as the band has progressed in its short but incredibly productive career. Despite the prolific output in just three years, Chasmdweller shows no signs of slowing down anytime soon. I recently caught up with guitarist/bassist/drummer Zach Smith to talk about the band’s epic run and what is fueling the creative fire.

I always like to start by finding out how the band got started. What was the genesis of Chasmdweller? How did you guys meet and decide to form this particular band? Being a two-person band, do you find that has any unique challenges or benefits as opposed to a “traditional” lineup?

Zach: We’ve known each other for years and had worked together on a couple projects before forming Chasmdweller. Both of us have been active in the underground death metal community since the early 2000s, and one day we just decided to collaborate. We believe in having a strong workflow ethic, so we’re able to write and record a full 45+ minute album in a matter of days. Especially since there are only two of us.

What got you guys into death and doom metal? Who were some of your inspirations within the genres?

Zach: Cannibal Corpse, like a lot of others, were my main gateway into the world of death metal as a young lad. I remember laughing so hard at their lyrics, and the music was just incredibly heavy. The band Death also had a massive impact on how I wrote songs and played riffs on guitar early on. My style is kind of progressive in a way, but also very primitive and chuggy, like a mashup of those earlier CC albums and the later, more experimental Death albums.

You guys pretty effortlessly blend elements of death and doom into a cohesive package. As a fan of both genres, it’s a hell of a great mix. How important is it for you guys to follow your inspirations and not corner yourself into one specific box? How would you describe the Chasmdweller sound?

Zach: I’m always listening to other bands in the death metal underground, a lot of them are great friends of ours, but none of them are doing it like we are. The Chasmdweller sound is abrasive, evil, primitive, skull-bashing, knuckle-dragging metal. One thing we’ve always tried to maintain is the ferocity of the music itself. We spend a lot of time making sure you can feel the power of the sound. A lot of bands kill their own albums by having a limp dick mix. Chasmdweller makes you feel like you’re being crushed by a 50-ton steamroller.

Although you’ve only been a band for three years, you’ve gotten three full-lengths recorded and released in that time. How were you able to keep up that pace and what’s fueling the current creative fire?

Zach: This is the way it’s always been for the both of us. We seem to have an endless spring of creativity and are constantly releasing music, even outside of the metal genre. We’re both producers active in the Hip-Hop scene for example. We’re just music guys in general, and music is life! Go check out our full discographies sometime!

How do you feel like the band has grown and changed over the three albums? Is it easier to get what you want when you step into the studio to record now that you’ve gotten multiple releases under your belts?

Zach: The sound has evolved so much since we started. Honestly, I think it changes for every project. When we decide to write a new album, we usually come up with a title and go from there. Most of the time all of the music is recorded within a week, and then Donny will write and record lyrics. They always come together very quickly.

What’s the process like for writing the music side of things? Has it changed as the band has gone along?

Zach: It might sound weird, but I record the drums first and then improvise the guitars over them. Not exactly sure how many people do it like this, but it helps me to write more percussive riffs. It usually translates into a more natural and very heavy sound. This is how I’ve written the songs since we started back in 2019.

What’s the lyric writing process like? Do you have any inspirations that you turn to to help get those written? The songs always have really cool lyrics that frequently deal with various dark topics. What about the darker side of life appeals to you as a writer?

Zach: I can’t speak for Donny, but he does have a lot of interesting influences when it comes to writing. Everything from ancient evil, to biological monstrosities, to occult-themed stuff. He definitely has a way with words.

What was the writing/recording process like for the most recent album, Flesh Crusade? It has really solid production on it, where did you record and how were you able to achieve the sound on that one? Specifically, how did you come up with “Death Colossus?” I love that track and the fact that it’s over 20 minutes and needs every second of it is incredibly impressive.

Zach: This album was a bit of a nightmare for me. I’ve never written and produced a 20-minute song before, and it proved to be very difficult. I recorded four guitar tracks per song on that album, so when it came time to record “Death Colossus” I had to perform a solid 80 minutes straight of relentless death metal riffs. I recorded them all in one session, too. I guess I’m slightly sadomasochistic in that regard. My hands were absolutely fucked and bleeding after recording that one, but I think it turned out incredible. That might be our opus.

What was the writing/recording process like for the EP you just put out, Festering in Aural Trauma? It’s a really quality EP and it blows me away that it comes during such a deep run and doesn’t feel anything other than absolutely essential. Pantheon of Psychotic Deities (awesome title) really blew me away on that one.

Zach: Thanks man, we appreciate the kind words. This one wasn’t much different when it comes to the writing process. This one is very aggressive and goes straight for the jugular. After almost killing ourselves with Flesh Crusade we needed to do something in another vein. There was no way in hell we were going to do a 40 minute song to try and top ourselves! ..Not yet anyway.

The releases always have really cool, memorable artwork to go with them. Who does them and how much input do you give them beforehand? What do those covers represent to you? As a listener, they really match the style of music and definitely set the tone for the listening experience.

Zach: Our friend Grant Hatfield AKA Filth Effigy has handled all of our artwork since the Fossilized EP. He is truly one of the greats of underground death metal art. He’s constantly posting incredible art on his social media pages, so go check out Filth Effigy and give him a follow!

How affected has the band been by the COVID pandemic? It clearly hasn’t hindered you putting out music! Has it affected any live plans at all?

Zach: It hasn’t affected our music at all. If anything it encouraged us to stay home and make more music.

What’s your local scene like up there and how has it shaped you as a musician?

Zach: It was cool at one point, but it kinda faded away. Not much going on here lately anymore. I would say recording music with other people has shaped me more than performing locally.

Lastly, what’s next for Chasmdweller? What can fans look forward to here in the future?

Zach: Oh, I dunno.. Maybe a new album. I guess you’ll have to wait!