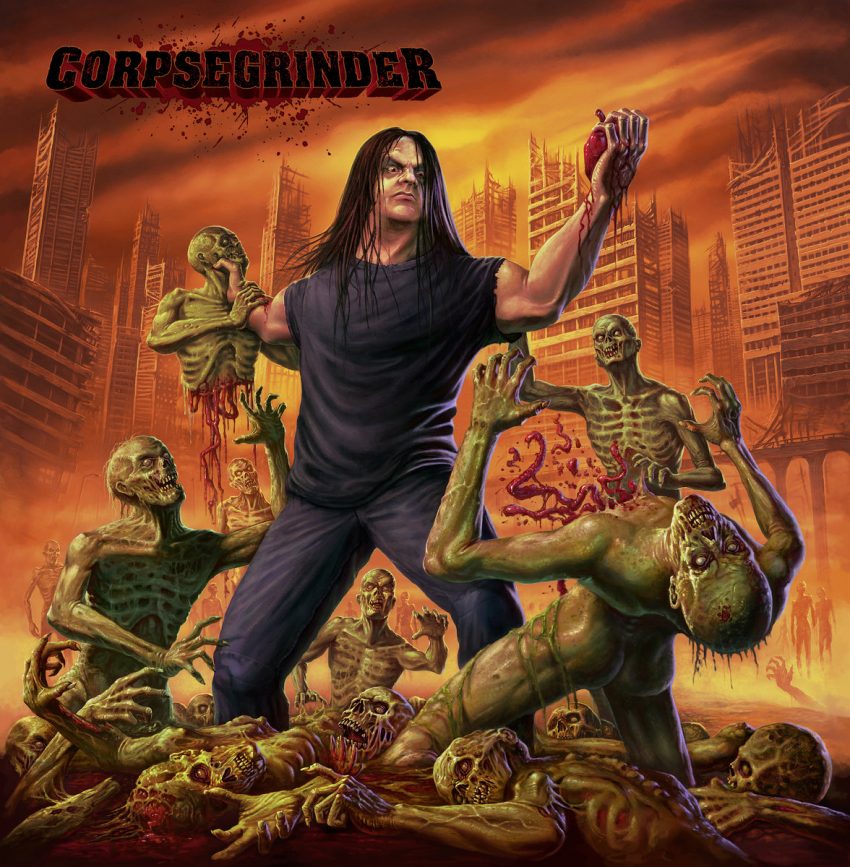 This is not a Cannibal Corpse album but you can be forgiven if you thought that just by hearing it. What can’t be forgiven is anyone pissed that George “Corpsegrinder” Fisher’s solo debut sounds Cannibal Corpse-ish. I’m seeing a decent chunk of people who are kind of ho-hum on the album due to the fact that it definitely has a distinct Corpse pungency to it. I have no idea how you look at that (undeniably kickass) cover, hear the single “Into the Acid Vat” (which features Cannibal Corpse guitarist Erik Rutan no less), or even just know that Cannibal Corpse’s second and hands-down best vocalist (yeah, I fucking said it) is releasing his first solo outing after 25+ years helming death metal’s flagship band and then come away cranky that it bears more than a faint resemblance to his other band. For anyone with enough powers of prognostication to see that Corpsegrinder’s self-titled album would probably be a different flavor of Corpse, this thing is a total blast.

Opening with “Into the Acid Vat,” the album wastes no time reminding the listener of some of the best aspects of Cannibal Corpse. Rutan’s fat riffs, Fisher’s catchy-as-hell chorus, and lyrics to make a splatterpunk author swoon all start the proceedings off with a memorable bang and it’s easy to see why this was the first single from the album. Throughout the 10 tracks on the relatively short 31-minute release, longtime fans of Fisher are treated to a lot of what makes him one of the most well-known frontmen in death metal. Songs like “On Wings of Carnage” and “All Souls Get Torn” find Fisher’s rasping vocals blaring over blasting, bombastic drums and chugging guitar riffs with ominous lyrics straight out of a grindhouse movie (which, considering the font choice for the cover, feels like anything but a coincidence). By the time album-closer “Vaguely Human” finishes you off with a brisk, barely two-minute flurry, it’s easy to tell Fisher is probably never stepping outside of the genre that he has spent more than two decades helping to define and, when you do it as well as he does, there’s really no reason to.

When the album moves on into “Bottom Dweller,” the album actually starts to add in an element that you don’t hear too often (if ever) on a Cannibal Corpse album and something that helps differentiate this from Fisher’s other albums: doom metal stylings. There are splashes of doom-tinged flair that start to pop up in this song and recur throughout the record, particularly on the late album track “Devourer of Souls.” No one would ever mistake this for a Monolord album but if you listen, you can clearly hear some doom pacing sprinkled throughout the album and it meshes nicely with Fisher’s unmistakable vocals. Tracks like “Defined by Your Demise” also kick in some hardcore thrash elements, which isn’t a huge surprise for an album co-produced by Hatebreed mastermind Jamey Jasta, who also released the album on his new label, Perseverance Media Group.

Musically, Fisher has a competent backing band behind him here with Charlie Bellmore on guitar and bass and Nick Bellmore on drums. The Bellmore boys, who are both former members of Toxic Holocaust (and make up part of Dee Snider’s current band), definitely display their thrash skills in bursts throughout the album. Corpsegrinder is never gonna play with a better rhythm section than Alex Webster on bass and Paul Mazurkiewicz on drums but the two Bellmores acquit themselves nicely and do manage to put enough of a spin on most of the material to make it distinguishable in places from Fisher’s other band (not Paths of Possession, the other one).

The album is certainly not without its flaws. The front half is a way more consistent listen than the latter half, with a couple tracks near the end feeling more forgettable than necessarily bad. Still, if you are looking for a rock-solid death metal album, you could do way worse than this one. I can totally understand people wanting artists to branch out more than Corpsegrinder does here but, when they’re this good at what they do, there’s something to be said for an act that gives the fans another competent, enjoyable dose of the tried and true formula. Fisher just gets this style of music, no two ways around it. Old-school, Tampa-style death metal is lodged in this man’s viscera and if you opened him up in the style of one of his songs, you’d find death metal running in the veins and arteries of that massive neck.