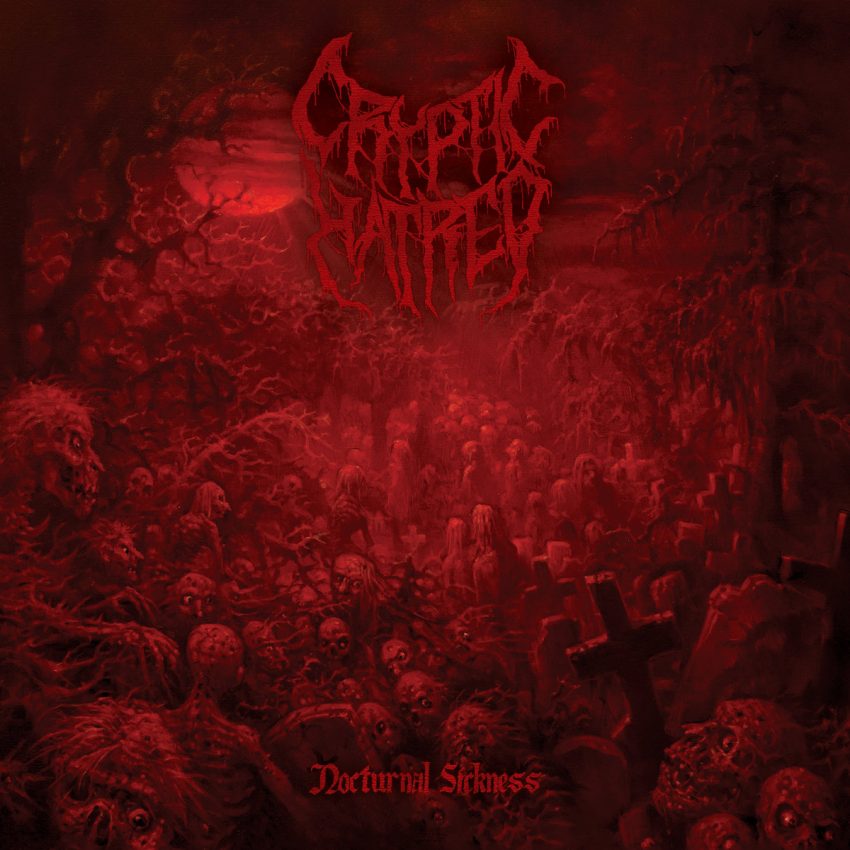 Some albums take a bit to grow on you and demonstrate what they are all about. Nocturnal Sickness, the debut longplayer from Cryptic Hatred, is the other kind of album, the kind that grabs you by the lapels and screams out in your face from the jump to pay attention. The killer riff that launches the opening track, “Into the Depths,” sets the tone for the album and makes a hell of a statement from the get-go. By the time the song has played out, you’ve been treated to a powerful vocal performance from Eemil Lajoma, a jarringly effective change of pace halfway through, and a blistering solo near the end. Welcome to the world of Cryptic Hatred.

Nocturnal Sickness, which I had to seriously keep reminding myself was a debut album, is the kind of release that feels like it comes from a band several LPs in and who has a strong grasp of their craft. Cryptic Hatred, who hail from Finland, put out a demo in 2020 that was a solid harbinger of things to come. The first LP, released back in February, however, marks a huge leap forward for the band.
The 10-song, just shy of 40-minute experience is a creation that is mixed brilliantly and that has great spacing on everything. It’s very easy to pick out all of the instruments on any track you put on and the arrangements do an expert job of highlighting the catchy, chugging riffs and the impressive solo work. Songs like “Stench of the Dead” know when to back off of the frenetic pace and then bring the drums crashing back in for maximum effect. It’s a strategy that’s employed throughout to maximum effect, particularly when “Vile Execution” drops everything out for a second and then bashes back in and hits you over the head with full force. There is a lot that this album does well but the pacing changes really stuck out to me the most. For more evidence, see the super catchy title track.

Any death metal fan that picks up this release (and you definitely should), will feel right at home seeing titles like “Strangled to Silence,” “Stench of the Dead,” and “Saw Torture” listed. When the album kicks in, the songs won’t disabuse you of the notion that this is clearly a band that has a deep love and respect for classics of the genre. Lajoma’s deep growl more than fits with the heaviness of the material but the effects that he puts on his delivery, particularly the layering on “Vile Execution,” help him to stand out and, along with the originality of the arrangements and compositions, serves to distinguish this band as anything but pretenders. Seriously, listen to the progression on “As I Enter Darkness” and try not banging your head up and down when that tempo picks up. It’s a fool’s errand.

Finland has been producing some of the absolute best death metal talent for decades now and that doesn’t appear to be changing any time soon. Cryptic Hatred is the latest in the long-running lineage of Finnish death excellence. They’re a band whose career I cannot wait to watch as they build off Nocturnal Sickness, which is a hell of a calling card. If you know what’s good for you, you’ll pick up their debut and get in on the ground floor of the next great Finnish export.