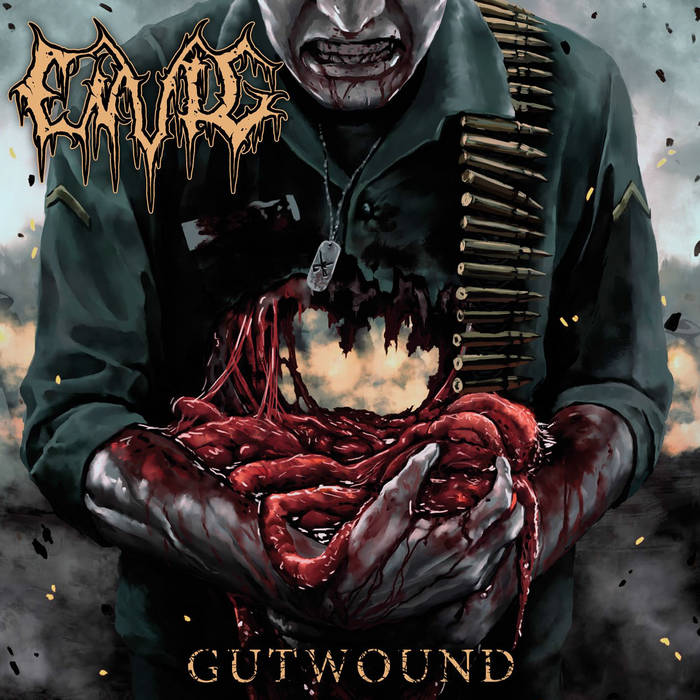 A gut wound lingers. In the movies, a gunshot to the middle tends to be a drawn out affair, with the unfortunate recipient left to suffer in agony for hours or days. It’s a visceral process of suffering, expiring from a gut wound, and one that’s a more than apt title for a death metal record that sticks with you for days after listening. After you hear Envig’s 2021 crusher Gutwound, you’ll get why they named the record the way they did.

Envig, which formed in 2015, has been steadily making a name for themselves in their native Sweden amidst what is always a strong death metal scene in their homeland. Through two records, 2021’s Gutwound and 2018’s By Human Hands, Envig has been building their sound and their following in Sweden’s death metal scene. I recently caught up with Damien Terry, bassist and vocalist for the band, to talk about Sweden’s next big export.

First off, how did Envig get started? How did you guys meet and what made you want to form this type of band?

Damien: Well, we first met at a gig where we played in three different bands. After that I threw a question out on Facebook. “Does anyone want to start a crust-punk band with me?”
I received an answer from Pontus [Bratt] who plays guitar. He asked Fred [Larsson] who was in the rehearsal room next to his band if he wanted to play the drums, and he accepted and asked if we wanted one more guitar player, which we did, so Josef [Blad] joined the band as well.
But at the first rehearsal it turned out that Fred was one hell of a drummer, so we threw some death metal into the mix and thus Envig had found its style.

What got you into extreme metal in the first place and who are some of your big inspirations?

Damien: Well, personally the first extreme song I appreciated was “Hammer Smashed Face” by Cannibal Corpse. From there it kinda went downhill. I think the idea for starting a crust/death band came from Disfear. But more inspirations that can be heard in our music is Jungle Rot, Bolt Thrower, and Entombed.

What appeals to you about death metal in general and what made you want to play such an extreme and difficult style of music?

Damien: I don’t know. I like banging my head I guess! As a musician you always want to evolve, become better, try new things. Death metal is a good place for that. We don’t play that difficult music though. Meat and potato is what we go for in general!

What is the writing process like for the music and has that changed at all as the years have gone on?

Damien: We usually sit at home and write riffs. We then bring them to the rehearsal and show them. Then we mix and match each other’s riffs and fine-tune them. I write 90% of the lyrics. That has changed since we got Sebbe [Gustavsson] in the band on guitar/vocals. He writes lyrics too as well as music. That might affect our style for the better in the future too.

What is the writing process like for the lyrics aspect of the band? Who writes those and what do you/they use for inspiration? What do you try to do with the lyrics for an Envig song?

Damien: I usually watch or read something horrible. The Rape of Nanking and The Gulag Archipelago are two examples of literature that has inspired our lyrics. I read, watch documentaries, and then I try to express what I have read/seen as brutally as I can.

I like to point out the dark side of human nature. People seem to ignore the fact that we have one, which annoys me. If you are aware of what humans are capable of doing, and that YOU have that side inside of you I believe that you have a bigger chance of not being just another “order-follower.”

How did recording the debut, By Human Hands, come about? What did you learn from the process that you improved on over the following releases? How exciting was it to finally have a full-length release done after so many years?

Damien: By Human Hands was recorded in Josef’s apartment and the rehearsal room. We were a bit low on cash so we recorded it on our own. Gutwound was recorded at Nordic Soundlab and Soundport studios. Mixed and mastered by professionals hence the sound difference. We are extremely proud of both releases but Gutwound actually made me cry when we tracked the last solo (which was the last thing we recorded). A lot of work that came to an end and resulted in a really good album.

With two albums out, is it harder or easier to make records these days? I assume you probably feel pretty comfortable recording at this point but it can always be a challenge to not repeat yourself with the more albums you put out. I think all of your albums are incredibly varied and unique, how do you make sure you’re not doing the same thing over and over?

Damien: I reckon we have learned a lot by being in the studio for a week straight. Recording night and day. It went really well and we will definitely record the next album in the same studio.

I don’t really know. We just make sure to not repeat what we have done musically. Next album has one new writer as well. So the upcoming songs differ even more from previous releases, in a good way. More evolved but still meat and potato mashing HM-2 death metal.

What was the recording process like for the most recent record, Gutwound? Was the creation of that at all affected by the COVID pandemic? How happy were you with the final product?

Damien: COVID actually helped us get the record done. With no gigs to practice for we focused entirely on writing our songs and booked the studio. Also the pandemic was “over” in Sweden just by the time that it was released, so it was perfect timing.

We did a raw recording with programmed drums first, recorded on my kitchen table and laptop. Then Fred recorded the drums for three days in Nordic Soundlab. A few weeks after we went to Soundport studios in Ulricehamn and just recorded all the string-work and vocals. One week straight. I think you go into some kind of mode cause we were like machines. Taking turns on songs. Laying some bass on maybe three songs, then some guitar on the same songs. Going back and correcting mistakes when the recording guy came back in the mornings. We had a good flow, and a Super Nintendo in the bedroom. Nice to chill out with some Street Fighter or Donkey Kong between recording sessions.

From that first recording to the most recent one, how do you feel the band has grown and evolved?

Damien: A lot. Both sound wise, lyric wise, and how thought through our songs are. More solo parts. I have learned how to growl properly. More advanced drumming. A bigger and awesome fanbase too which grew a lot when we released the first single, “A Swamp of Human Waste.” We seem to be doing something right.

How exciting is it for you to have live shows back? Have you gotten to play live yet and what was it like finally getting back in front of a crowd?

Damien: It’s why we do it really. We have played a lot of gigs since the restrictions were removed, all of them in Sweden. But on both coasts and a few festivals in land. More gigs are booked and we are just going with the flow. Good response most nights!

Sweden has been putting out great extreme metal bands for decades now. What makes the area such a fertile breeding ground for extreme bands and what effect has your local scene had on the band?

Damien: We have a musical legacy, not only in metal. I mean, look at ABBA and Roxette and stuff like that. I guess it is also very easy to start a band in Sweden. There are usually fully equipped rehearsal rooms in every town which you can rent very cheap from different youth organizations. That way you can try playing music in a band without having the money to invest in all that you need to even try it out.

Why do we have so much metal? I don’t know. Something in the water maybe. Swedish culture might have been affected by the extreme living conditions that our ancestors went through. Surviving the winters and starvation probably made for hard minds. The darkness that is the Swedish winter might help too. I don’t know, haha.

Lastly, what’s next for Envig? What are your goals for the future of the band?