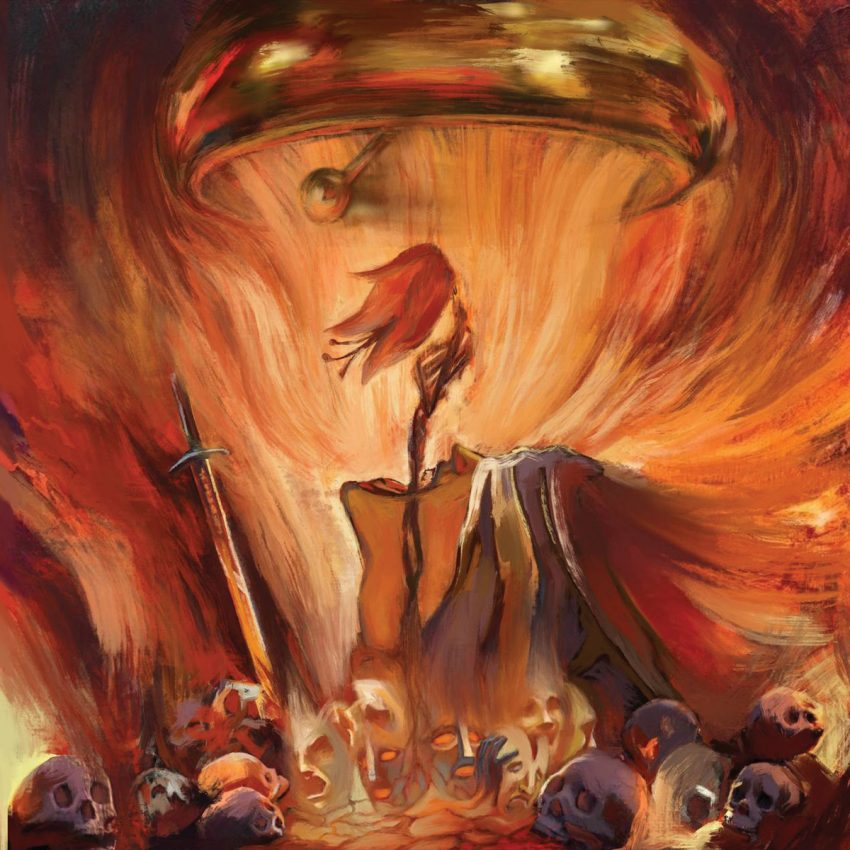 If you’ve been lamenting the lack of Lamentations albums for the past six years, your ship finally came in back in November when the Singapore progressive death metal outfit put out its second album, Passion of Depression. If you dug the 2013 debut, Echoes in the Wind, then you should be pretty stoked on the band’s follow-up. Passion of Depression takes everything that was great about Lamentations’ debut and hones it into a more mature and varied presentation. It’s the kind of second record that, although it took awhile to get here, shows that the first time out was anything but a fluke and that these guys have serious composing and playing chops.

Since forming in 2013, Lamentations has gone through a few lineup shifts with vocalist/guitarist Danny Jacob (whose stage name is Jungle) being the only remaining original member. The new lineup, however, has wasted no time getting into fighting form as this year’s excellent new record shows that Lamentations has plenty to give fans in whatever incarnation they inhabit. Passion of Depression being as memorable as a return as it is remains proof positive that this new lineup has serious chemistry. I recently caught up with Jacob to talk about the band’s history and the new record.

First off, what is the origin of Lamentations? What made you want to tackle this kind of band?

Danny: I’ve always had a love for progressive death metal music and hence I write in this style. I started this band in 2013 and its first piece of music was released in 2014.

Danny: Lamentations is a book in the Bible and the meaning of the word fits the theme for the last and our new album.

Danny: It all started with Linkin Park’s Hybrid Theory but I would say Opeth was the biggest connection for me to get into progressive death metal. Other bands I would tribute would be Cynic, Dream Theater, and The Faceless.

Danny: This album was quite a big collaboration between myself and Chris [Stropoli] the drummer. When he joined the band, I had written three songs at that point. We work on the songs together with Guitar Pro. I write most of the riffs but Chris contributed a large chunk of it too. One of his great strengths, which is a downfall of mine, is transitions between riffs. Was good to have him in the writing process of this album. For bass and keys, I let the guys do what they wish. I might have an idea or a certain direction I would want to lean into for some parts but mostly I leave it to them to create.

What’s the writing process like for the lyrics side of things? What do you try to do with the words to a Lamentations song and is there anything that you turn to in particular for inspiration?

Danny: Passion of Depression is a concept album and the lyrics are about one’s life journey, but from a cinematic point of view. Each song is a gradual phase in a Prodigal’s journey. The last album was written in a very fictional story format, I wanted this one to relate directly to reality.

I’m always interested in how bands get the chance to make their first records. What was the writing/recording process like for the debut, Echoes in the Wind? How did the process go for you and how happy were you with the final product? What did you learn from the process that you took to subsequent recording/writing sessions?

Danny: The first album was a little rough because I was learning everything as I went. I figured out how to record my guitar and bass at home. I got microphones to record my vocals and flute. The recording process was very amateurish, but I [learned] plenty from that album, as well as from people I’ve met along the way who were more experienced in recording.

Going to the new record then, what was the writing/recording process like for that one? Was it a harder process than the debut or easier?

Danny: This one was still very DIY, but from tips and tricks from various people I’ve [learned] how to get better sounds with my instruments. From using better pickups for my guitar, and recording my vocals in an enclosed environment and so on. I can’t say much for the drums, as I wasn’t there, but Chris did a fantastic job in having them recorded himself. He’s picked up a few skills himself from the single we recorded in 2019 to the album now.

I wanted to ask about the inspiration for a few songs on that album. Could you tell me how the song “Anew” came about?

Danny: Musically, that song takes inspiration from bands like Obscura and Cynic. It’s one of the first songs we wrote, hence we released it as a single in 2019. I still think it is our catchiest song on the album and if we didn’t release it three years ago, we would have released it as the first single of the album.

“Sombre” is another favorite of mine. Where did the ideas for that one come from?

Danny: “Sombre” takes big inspiration from a movie soundtrack, which I will not name. I want to see if someone can figure it out. But there’s two solos on there by Ole Børud, and he absolutely kills it. We love his work and we’re elated to have him on the song.

“Nurture” is another really epic song I really dig from there. Could you talk about the inspiration for that one?

Danny: This is the album closer and this was written to [summarize] every song that came before it. Chris had a great idea of picking one riff from every song to be repeated into this song. So we go by reverse chronological order and the first repeated riff is from “Obeisance,” all the way to “Prodigal.”

That cover to the album really jumps out to me as well. Who did it and how much direction did you give them? To you, why does that image best represent this album?

Danny: I’ve always had the concept for the album art at the back of my mind. Basically I wanted each song to have a symbol that would represent it and the artwork is just all the symbols interacting with each other in a vague abstract way. The artist Nastya was recommended by Prophet, our lead guitarist, and this was actually her first piece for a metal band.

What do you look for in a potential member of Lamentations when you have those openings and how do you manage to keep a healthy band dynamic?

Danny: Well, we’re basically an internet band because everyone is either in a different state or a different country so there’s no real obligation to play live. It’s quite a challenge to prepare for, given the complexity of the music and the cost of setting up a tour. So for the members in the band, I just want them to enjoy writing and making music. To keep a healthy dynamic, I try to give them as much creative freedom as possible over their parts and encourage them to contribute so that they can be part of the music.

What is the metal scene like where you live and how has it shaped the band?

Lastly, what’s next for Lamentations? What are your goals for the future of the band?

Danny: It would be such a joy to play these songs live. They’re at the back of my head to try and do something live someday. I am [practicing] the music so if a tour ever happens, I wouldn’t be completely unprepared. Other than that, we have new material that we’ve already written. We just gotta put some lyrics down and start recording so I hope to put out a new album soon.

[I] would like to show my gratitude to everyone who has listened to our music, and supported us. If they would like to check out our music, we’re on all streaming platforms and can get our CD through the Willowtip website.