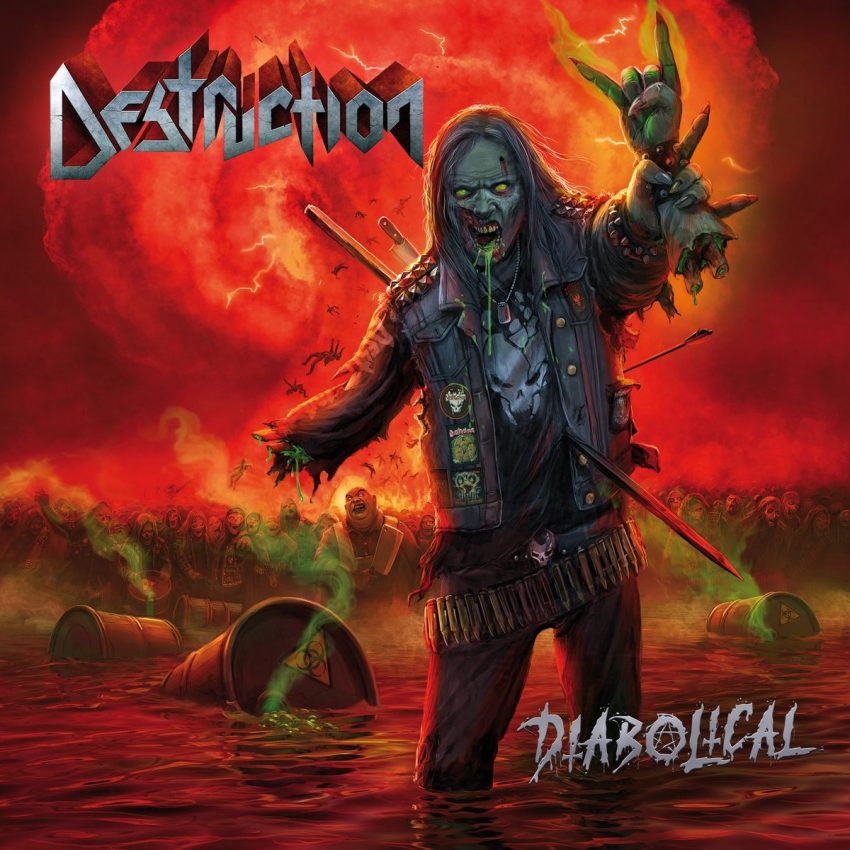 Quite honestly, this might be one of the more pointless reviews I’ve ever written. If you know Destruction at all, then you should more or less know what to expect from the band’s fifteenth longplayer in their 40-year career. The German thrash pioneers aren’t out to reinvent the wheel on Diabolical, nor would I particularly expect or necessarily want them to. Marcel Schirmer still rasps and howls his way through a collection of songs dealing heavily with the ills of society while the drumming comes fast and furious, the choruses frequently feature gang vocals, and the riffing propels songs forward through multitudinous solo breaks. If you’ve been along for the ride with the group before, you might as well stay on board for the new record.

The big change here is new rhythm guitarist Martin Furia, who acquits himself nicely here but doesn’t necessarily stand out or have many chances to. Randy Black, on his second LP with the band, continues to show why he was an astute choice to bang the skins for the group. Black’s technical ability and propulsive blasts carry plenty of songs forward and give the band’s tracks a lot of their urgency. Damir Eskick still remains a proficient guitar player with a furious need to fill tracks with solos. Most of them are damn solid but after a while they can get a bit incessant.

The album starts on a really strong note with the title track (after the opening intro “Under the Spell”) setting the tone for the album from the jump. Black’s steady pounding of the drums lead us into Schirmer howling over the driving riffs that really put the listener right in the zone of the album. It’s one of the stronger cuts on the record and a smart choice to start things off with. The next song, “No Faith in Humanity,” keeps the train rolling with another really quality track. Schirmer’s vocals, forty years on, still sound great here and he mixes them well with the gang attack on the chorus. “Repent Your Sins” follows it up with a little bit of a slower-paced attack on religion, one of metal’s favorite targets. It’s a standout track, mainly because it mixes things up a little more than other songs on the release.

In general, the album is a bit front loaded but there are tracks later on that stand out, such as “Servant of the Beast” and “Ghost from the Past.” The main issue that I have with the outing is its tendency to sound a little samey after a while. I wouldn’t say there are songs that are straight up bad, but there are a lot that tend to run together after a bit. It’s a problem I’ve kind of always had with Destruction but it’s never been serious enough for me to really dislike their work. If you have enjoyed any previous album from the band, it’s hard not to recommend Diabolical. I’m by no means a super fan of the band and I still enjoyed myself throughout. If you need a sturdy, dependable thrash album then you could do far worse than this one.