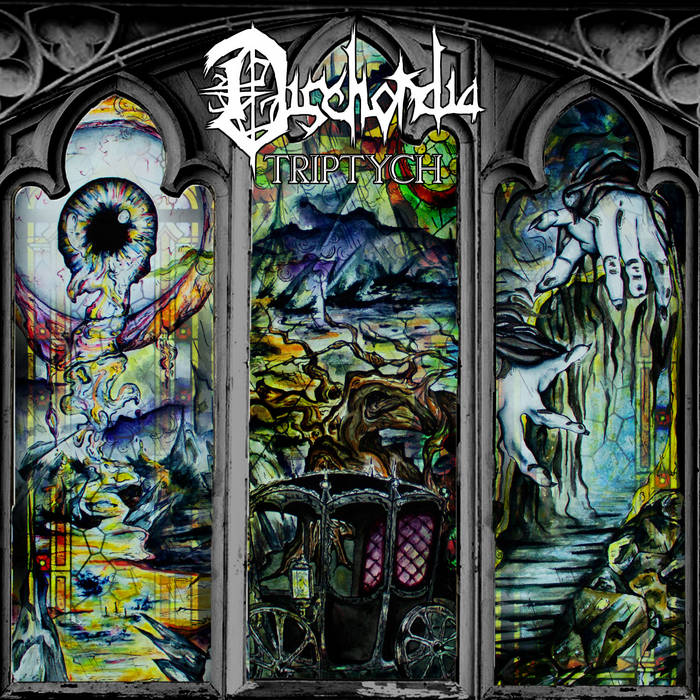 For those of us who live and breathe metal, discord is not stranger to us at all. We are, quite frequently, at odds with the world around us. The more into the world of metal one dives, the more of a disagreement that person is going to have with what the mainstream thinks is “good” music. It’s not a given but it’s a solid bet that if someone’s favorite band is Bonehunter, they’re probably not going to give much of a shit about what the latest Taylor Swift pablum sounds like. For those of us who thrive on this discord with the mainstream, bands like Dischordia feel like a gift from Odin.

Formed in 2010 in Oklahoma City, Dischordia has spent the past decade plus making music that no one is going to mistake for anything mainstream any time soon. That’s a good thing though and the tech death trio continues to hone its complex and punishing brand of music while looking to expand its listenership to as many of us misanthropic miscreants as they can. I recently caught up with the band to see how they’ve been weathering the pandemic, how the latest album, Triptych, came about, and what is on the horizon for the group.

First off, how did the band get started? Who did you all meet and what made you want to form this band together?

Dischordia: Josh (Fallin, drums) and Keeno (guitar) had been playing together since they were teenagers in a ton of different bands. They eventually settled into sort of an early version of Dischordia with a different name and a rotating cast of other people. (Josh) Turner (bass/vocals) met Josh a while later when they were both in college for music and initially joined as just the vocalist, since at the time we had a bassist. He left shortly after what is now Dischordia had properly started, and Turner took over bass in 2011.

What got you guys into death metal in the first place and who are some of your influences? What appeals to you about that style of metal?

Turner: I think we all found our way to death metal gradually. You hear something heavy and it just clicks, so you gradually get heavier and heavier in what you’re listening to until one day you have to awkwardly explain the Dying Fetus record in your car to someone. It was actually at a Dying Fetus show a long time ago (2004?) that Keeno and Josh decided they wanted to make a death metal band.

Keeno: For me, I grew up listening to a lot of thrash metal (Metallica, Slayer, Sepultura, etc.) along with a healthy dose of prog rock (i.e., Tool). I believe the first death metal record I ever heard was The Bleeding by Cannibal Corpse. I remember being intrigued by it, but it wasn’t until I discovered Meshuggah and Opeth in the late 90s that I thought, “Now this is metal.”

Josh: The early nu metal acts were the gateway for me. Meshuggah, Opeth, Dillinger, Emperor, Decapitated were some of the main key influences once I got into the heavier scope of music.

What is your music writing process like? Has that changed at all over the years?

Dischordia: All three of us are constantly writing. We really thrive on each other as inspiration. The beginning of Dischordia was mainly Keeno and Josh writing. Over time, Turner became an integral part of the dissonant/technical sound we lean towards. The process usually begins on an individual level where someone shares a riff or a section of music they wrote. We use Guitar Pro to write, so we all see the guitar, bass, and drum ideas mapped out. Then it’s kind of open season to see what we can build from there. We’ve all learned to work together in taking helpful feedback for what’s best for the song. When it clicks, it clicks hard.

What’s your lyric writing process like? What themes do you like to include in Dischordia songs? Do you have any particular inspirations that you turn to?

Dischordia: Turner and Keeno handle the lyrics. Both of them enjoy creating characters and building stories to reflect anything from politics and religion, to funny encounters and fucked-up dreams. They both have similar processes where they first hear rhythms and accents in the music, and then apply lyrics where applicable. Vocals are an important part to our sound, so it’s fun to challenge ourselves to growl over obnoxiously difficult passages.

You guys have had a really consistent lineup, what makes you all work so well together and what fuels the group’s creative fire?

Dischordia: Music is such a personal and relational experience. We’ve always felt it was best expressed and felt with those you know and trust. It helps that we’ve been friends since before the band. Sharing music can be a rather intimate experience, so being able to trust one another really helps. It makes us work on a deeper level. We all write for the band, and thankfully we all enjoy what each other writes. We also listen to a lot of different music and want to put out something that we’re not hearing somewhere else. It’s a fun challenge to keep pushing ourselves and that so far has been the easy part of working together. Our sound has really grown more collaborative over the past 3 releases.

What was the process like to record your first LP, Project 19? Was it a learning process and what did you take from the experience that helped the band improve and grow?

Dischordia: Damn, great question. We had such high hopes for that record. We still feel it’s some of our strongest material ever written, but we were under a lot of pressure from the label at the time who didn’t really understand what we were going for. We also received bad advice from the engineer on how to capture the sound we desired. We felt it totally missed the mark. We are coming up on the 10-year anniversary of that record. We’ve dabbled with the idea over the years of re-recording select tracks from Project 19 in order to better showcase the real potential that was lost in all the noise. The greatest lesson we learned from that experience was, no matter what others say, to take our time in crafting the final product. If you go even further back, we were planning on doing an EP instead of a full length at that time. Raymond Herrera (Original Fear Factory drummer) was introduced to us by a mutual friend and he pushed us to put together enough material to do a full album and offered to help us record it. We flew out to track drums in his studio, crashed at his house, and played the Whisky in LA. Unfortunately, we were not able to finish the album with him because of funds. It was an awesome and unforgettable experience though.

What was the recording/writing process like for your most recent one? At this point in your career, do you feel more confident in getting what you want in the studio?

Dischordia: Writing process was reminiscent of what we laid out previously. Lots of small ideas, sections, concepts and then string the ones together that made the most sense. Recording wise, we duplicated what we did with our last EP, Binge/Purge. We tracked drums in a studio with a friend and then tracked everything else ourselves in Castle Dischordia. Every sound you hear on the record, we recorded. From there we had some help from another friend, Josh Newell, for some small edits and then off to Colin Marston for mixing/mastering/re-amping. We’ve learned what we need to do to get a product we’re happy with and will most likely keep up this process moving forward.

How happy are you with the final product for that LP? I imagine the fan reaction has to have been incredibly exciting.

Dischordia: We made a concerted effort to capture what we wanted with this record. Aside from drums, we recorded every sound on our own. From the rattling chains to the choir, we wanted to make this vision happen. We are humbled and honored by the reaction around the globe. We felt we had something special last summer when we heard the masters, but this has been surreal. It’s the boost we needed after spending over 2 years without playing a show. Thanks, COVID!

I really like the cover for that record. Who did it and how much input did you give them beforehand?

Dischordia: Turner’s sister-in-law was the artist who put together the art for the record. We gave her the lyrical concepts and a few directions in terms of what we wanted to see and she painted this for us then digitized it. We knew we wanted an “all seeing eye,” a chariot trudging through bad landscapes, and something else that became the stairway and hands. She exceeded our expectations and we can’t be happier with how it turned out.

How much did COVID affect the band, either with live plans or with recording music?

Dischordia: We always do a few weeks of touring through the summer and when COVID hit, we were planning on spending the summer starting the record. So, no technical change in plans really. It definitely influenced workflow and a few other things but minus missing playing shows it didn’t screw up anything that we planned.

What’s your local scene like there out in Oklahoma? Has it helped develop the band at all?

Dischordia: It’s very heavy on the bar metal/bar rock type music. We have a great scene of amazing musicians but the tastes here in Oklahoma are much more basic. We’ve some great support but overall we see the best responses when we’re moving around the country.

Have you gotten to play live yet and, if so, what was it like to get back in front of an audience? If not, how excited are you to return to the stage?

Dischordia: We played a show last August for a farewell show for some friends. Oddly enough, Turner caught COVID so we had to do a bassless set and have guest vocalists. So, yes we’ve played but not as a full group. We’re super excited to hit a few shows in June and July to debut some of this material live.

Lastly, what’s next for Dischordia? What are your goals for the future?

Dischordia: We’ll be prepping for some summer shows and a festival in Chicago. We’ll be releasing some live studio recorded material from Triptych and then some individual playthroughs to keep support behind the record through summer.

We also already have a few new song ideas and a completed track. We’ll decide here soon if we want to push forward with another full-length or do an EP to drop something faster.