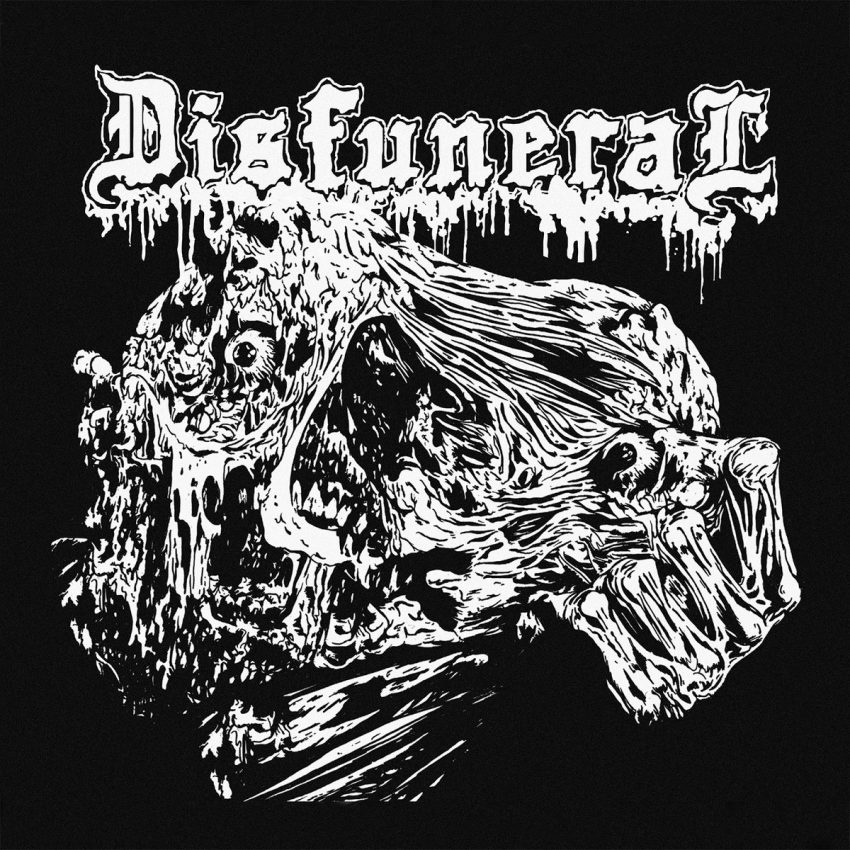 Even though it’s already been a fruitful year for debuts, the strong starts just keep coming. In the middle of April, Disfuneral put out their debut LP, Blood Red Tentacle, and it’s a must-hear for fans of old school death metal. The French band, which only has one EP out before the new full-length, has honed its craft thanks to plenty of practice time and a deep shared love of classics of the genre. But Blood Red Tentacle is way more than just a parroting of Autopsy or Cannibal Corpse. The record definitely owes a lot to various forefathers of the genre but also to various scenes around the globe, particularly Swedish death metal. In addition to being a blast of a listen, the album is, hopefully, the harbinger of bigger things to come from the young band. I recently talked with bass player Clément Favre about the band’s history and what fans can expect coming up from Disfuneral.

First off, how did the band get started? How did you guys meet and decide to form this death metal band together? How did you decide on the name?

Clément: We met in high school and we were Autopsy fans so we started playing for fun and created the band Herpes. We then evolved into something more serious and that’s where Disfuneral was born. The name is a reference to ’80s punk bands and a tribute to our references (Mental Funeral) .

What got you guys into death metal in the first place and who are some of your big influences?

Clément: We discovered death metal with Sepultura and Cannibal Corpse. But when we heard for the first time Autopsy, we totally fell into death metal and old school death metal became an addiction for us. For the band, our biggest references are Autopsy, Murder Squad, Death Breath.

You guys have had a pretty consistent lineup for a while it looks like. What makes you all such a good fit together and for this band?

Clément: Being childhood friends helps a lot I guess, and our devotion to death metal too!

How do you guys write the music side of things? Is there a set process and has it changed at all?

Clément: Florian Brabant, Renaud Mann, and me compose the majority of the songs together.  We start from a riff composed alone and we meet in our vault and we compose the music together. We have in mind an ambience that we want for the song or what kind of song (more aggressive, punk, doom, thrash or whatever…).  And we search all riffs and structures that match with ambience and our strict specifications. We have clear specifications that define our music style. So many riffs finish in sewers… But some of them survive. Those you hear…

How do you guys come up with your lyrics? Do you have a set process or anything that you like to turn to for inspiration to get the words to come? What, to you, makes an effective Disfuneral song from a themes and lyrics standpoint?

Clément: The lyrics are written in their entirety by Renaud, who is inspired by horror stories. The song is still written before the lyrics. Lyrics are really secondary. It’s just here to match with the vibe of the song. We consider the voice more like another instrument. The purpose is to touch the listener with sound not with words.

You guys definitely seem like big horror fans, judging by your work. What appeals to you about the genre? What are some of your favorites within the genre (books, movies, games, etc.)?

Clément: We appreciate the genre of exploring weird universes.  Younger, we were huge fans of zombie and gore movies (Romero, Fulci, and all the classics). We also like other kinds of horror. But we’re not specialists about it. Choosing your favorites is still perilous. We can give you some work who have marked us. For books: Dracula from Bram Stoker, MS. Found in a Bottle from Poe, The Outsider from Lovecraft.  Some movies: Della Morte Dell’Amore, Evil Dead, Phantasm or most recently: Hereditary, It Follows but there are many more. For games? Maybe Maniac Mansion. Ah ah! The aesthetics scared me as a child.

I loved Blood Red Tentacle. What was the recording/writing process like for that one? Was it difficult at all to get your sound down working on that first LP?

Clément: We searched for a long time for our sound for this album. We didn’t want a typical Swedish sound but something a little more dynamic. It seems to be a failure since our sound is compared to Entombed (laughs).

What will you take from the recording process for Blood Red Tentacle and use on future releases? Do you feel more comfortable getting what you want in the studio after recording that one?

Clément: We gained a lot of experience for composition and sound management. It will indeed be much simpler (and quicker? ahah) for the second album.

The cover for that album is a really cool and fantastical horror piece. Who came up with that and how much input did you give them beforehand? To you, what does that cover represent?

Clément: We gave Jon total freedom for the cover. He just asked us for the title of the album to inspire himself, he sent us the first sketches that we validated. The final work is great, we find the cover amazing.

How affected has the band been by the COVID pandemic, either in terms of getting music recorded or in terms of live plans? How happy are you that live shows are finally back, for the most part?

Clément: Covid delayed the release of our album a lot. To begin with, it was more complicated to meet, to compose, and to record. And once the album was finished, it took almost a year-and-a-half for the album to come out. We are super happy to be back on stage, we have a few shows planned soon. and we hope this is just the beginning!

What’s your local metal scene like out there? How much has that shaped you guys as musicians? If our readers dig your sound, who are some other bands for them to check out?

Clément: When we started, the local scene was more into deathgrind and brutal death, old school death was in the tomb in France. So the local scene didn’t shape us. There is a good old school scene in France now (not only death metal). Some bands to check? Skelethal, Hexecutor, Hürlement, Necrowretch, Ritualization, Cadaveric Fumes, Agressor, Mercyless etc..

Lastly, what’s next for Disfuneral? What are your goals for the future of the band?

Clément: The writing of the second album is in progress and it is already well advanced. We hope to do as many concerts as possible and finish our second album in 2023!