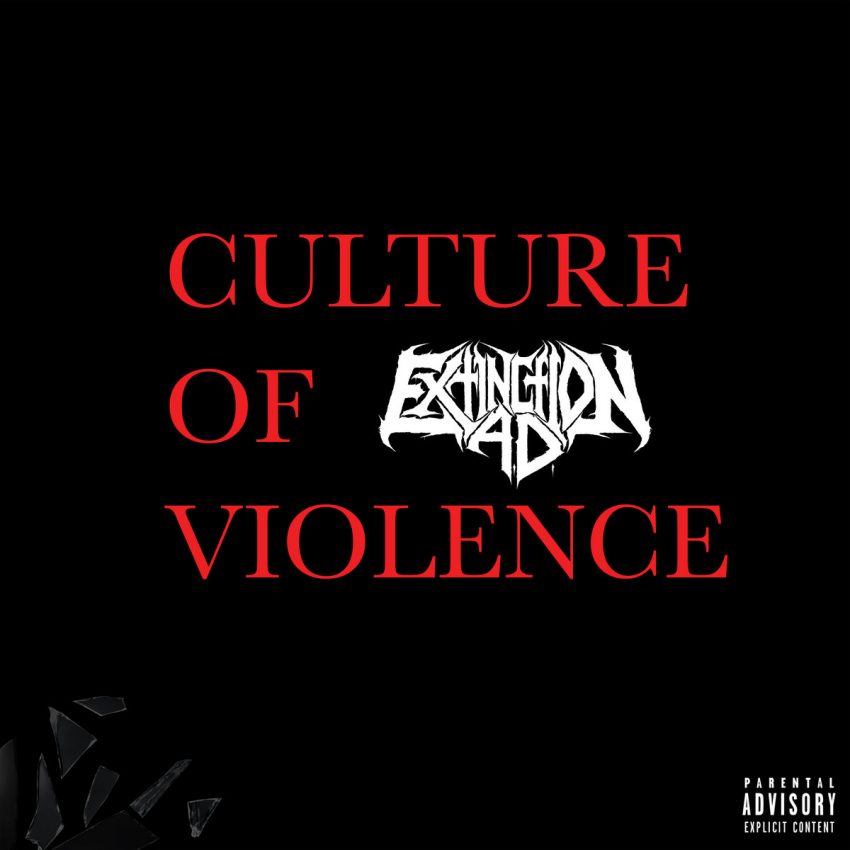 Anger gets a bad rap these days. The amount of people that I’ve seen complaining about people’s anger at the status quo as something bad over the last few years truly baffles me. Corporate greed keeps the majority of this planet locked into a perpetual cycle of economic servitude, politicians offer the illusion of choice while lining their pockets and those of their shady cronies, religious lunatics continue to serve up persecution and repression with glee, our species continues to set the fires that will rage until every living creature roasts on a hell Earth on our steady march to the grave…and on and on and on it goes. When you look at the world, why the fuck wouldn’t Extinction A.D. be angry?

Culture of Violence, the third and best full-length release from the New York four-piece finds vocalist and guitarist Rick Jimenez raging his way through one of the most pissed off records you’re likely to hear this year. “We let the leeches take control. Gasping for breath in a stranglehold but heads will roll,” Jimenez yells on “Heads Will Roll,” the album’s sixth track. The line comes more than halfway into the record but it works as a pretty succinct mission statement for the LP.

Jimenez and crew take aim squarely at a variety of societal ills on the album, including mass incarceration (“Thirteen”), police brutality (“1992”), income inequality (“National Disaster”), and wealth being made on the backs of the poor (“Praise the Fraud”). I get that none of these are exactly light topics but I’ve never understood the prickling that comes from some people when someone tackles these subjects with anger. If you’re a working class American, sometimes there’s not much else you can really do but get pissed off at the mess the country finds itself perpetually sinking deeper and deeper into year after year. It’s always feels wildly stupid to me that people complain about angry music like this becuase it seems to me that having an outlet to vent one’s rage such as Extinction A.D. is providing here is healthier than a lot of potential alternatives for getting that anger out.

Throughout the album’s ten tracks, Extinction A.D. proves that they’ve honed their thrash credentials to the maximum and it not only provides a viciously exciting listening experience but it makes me intensely excited to see where this band goes from here. The album kicks off with killer drums and riffing on the title track, which really sets the tone for the 38-minutes ahead, before slowing down into a solo near the end. In general, the album’s tracks are arranged really well and have killer intros, particularly the groovy bassline that starts off “Dominion.” The whole album is also just a riff fanatic’s dream packed with memorable thrash riff after memorable thrash riff. The band does keep things fresh by slowing it down here and there though, such as the nice change of pace during “Praise the Fraud,” which really stands out to me as one of the album’s best cuts.

If you’re pissed off or you’re just in the need of a new thrash classic to blast at the gym, Culture of Violence is a more than worthy addition to your collection. In a world of releases that hold back, Extinction A.D.’s go-for-broke, heart-on-sleeve style is refreshing.  This is an album that’s sure to piss off all the right people and it really feels like an album that has the philosophy that if we are all gonna go down, let’s go down screaming our lungs out.