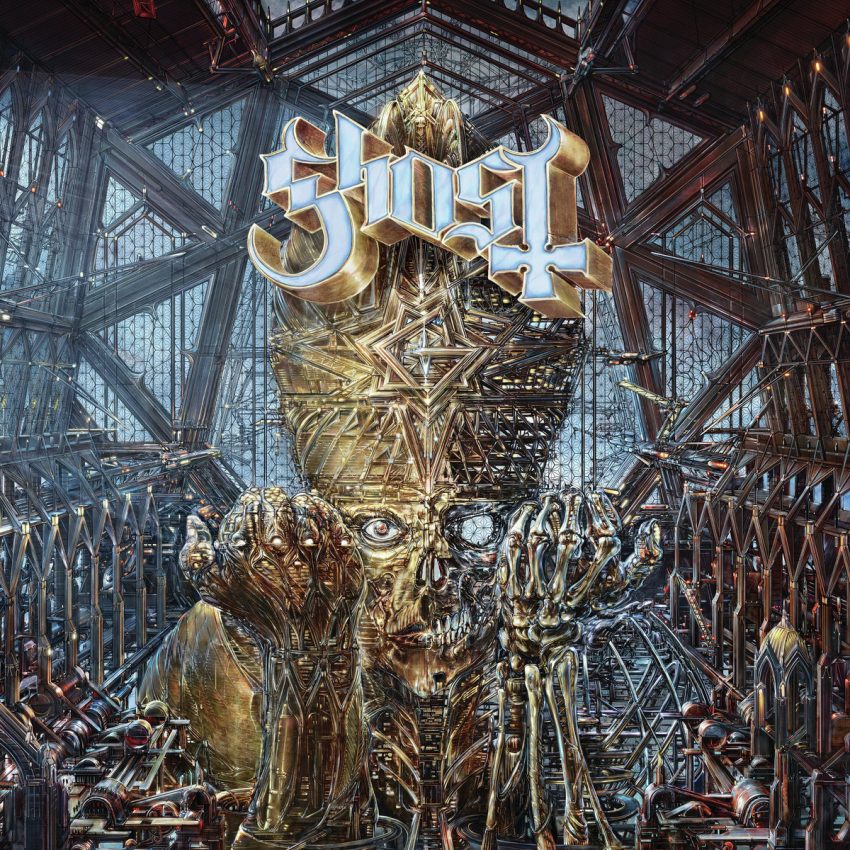 I remember sitting in my friend’s trailer in the fall of 2010 listening to this wild ass band I had just heard about. They sounded like the bastard child of Mercyful Fate and Blue Oyster Cult and contained some of the most catchy lyrics that I’d heard in some time, mostly about the singer’s love of sweet Satan. The fact that the band didn’t have much publicly known about it except for the ultra-Satanic looking singer and his Nameless Ghouls didn’t do anything but ramp up our excitement for the band. Songs like “Ritual,” “Elizabeth,” and “Satan Prayer” would have worn out the files on my iPhone from overplaying them if that were possible. Every few years from then on out, I have been thoroughly gripped by the latest Luciferian offerings from Tobias Forge and whatever Ghouls are in Ghost at the time. Impera, the band’s fifth longplayer, was the first time that I wasn’t.

I saw Ghost on the “Pre Imperatour” tour supporting this release back in mid-February and, as always, the band was a total blast live (seriously, see them if you get the chance). There are very few performers that understand how to grab and hold an audience as well as Forge and few people that seem to enjoy performing as much as him. The set was mostly hits from previous albums with a few songs from Impera thrown in. The show started with my first introduction to “Kaisarion,” which failed to grab me then and doesn’t do a whole lot for me now. To me, it feels like a mid-tier Foo Fighters song, maybe a lesser “Long Road to Ruin,” (which isn’t a dig at FF, I generally like Dave Grohl’s shenanigans). I don’t know why, but multiple listens to the song have failed to make much of an impression on me, which is a little how I feel about a lot of the album now that it’s out in its entirety.

Coming off “Kaisarion,” “Spillways” feels totally forgettable and more or less like a substandard Ghost song that could have been a B-side from any of the last few albums. “Call Me Little Sunshine,” the album’s second single, also fails to grip me and I’ve tried for a few months to get into that one. I think the song highlights a large problem that I have with the release, mainly that the lyrics, by and large, don’t feel up to the standard of Ghost’s other albums.

“Call Me Little Sunshine” particularly feels lyrically derivative of numerous other Ghost songs over their discography and too many others here feel either forced or cringeworthy (audibly groaned to “we’ll be smooching at the feet of da rulah, in the twenties we’ll be grinding in a pile of moolah” on “Twenties,” which thematically feels like a lesser version of “Mummy Dust” from Meliora). From what I can gather of the spirit of the album, I agree with the messaging that Forge is shooting for here about the rise and fall of empires and the late capitalism state of our own declining empires (although I’m not sure a dude charging $45 for a shirt is the best person to be calling out anyone else’s greed). To me, this feels like Ghost’s most political album yet (and again, one with a message that’s as timely as ever) so it’s a major bummer that the lyrics don’t really hit or feel particularly insightful or significant.

I don’t mean to sound like I hated the album because I honestly don’t. The production is fantastic, as always with Ghost, and Andy Wallace’s mix is as clear and professional as the job that he did on Meliora. “Hunter’s Moon,” the first single from the album, remains the best thing about the record (not to mention the Halloween movie that it was released with). The song, which you’ve undoubtedly heard by now if you’re reading a Ghost review, has the most infectious chorus on the record and it’s the song that stuck with me the most, although having heard it off and on for about six months now doesn’t hurt in that department. It still hasn’t gotten old for me though and I bopped along to it on my first listen to the album as much as I did when I first heard it months ago.

Despite those positives, this is a weak album. There are way too many songs that feel more like an AOR-track from the mid-’80s than anything else. I can’t tell if Forge has just gotten too used to playing to packed arenas and feels like playing it safe, or what is going on, but the magic and hunger of other albums feels gone to me on this one. This isn’t about the band changing sound that much either because they’ve never been a heavy band to begin with and bands switching it up isn’t necessarily a bad thing anyway (Venom Prison took way more risks than this on Erebos earlier this year and I’ll be damned if that doesn’t end up at the top or near the top of my year-end list). It’s mostly just that this sounds and feels pretty repetitive overall with not much that’s going to stick with me going forward.

I’m sure the faithful will dig this enough and I genuinely hope that they do. It bums me out that I didn’t dig this more and I really don’t want to shit on it continuously because I liked the other albums a lot and have always had a big soft spot in my heart for this band. That being said, I got nothing out of this other than a couple decent songs. Ghost is a band that should either excite you or piss you off with each new album (probably mostly depending on where you fall on the Jesus spectrum). For a guy who very boldly shit on pretty much all extreme metal past the mid ‘90s while promoting this album, you’d think Forge would have something up his sleeve to back up the talk but for me, this thing is all bark and no bite.