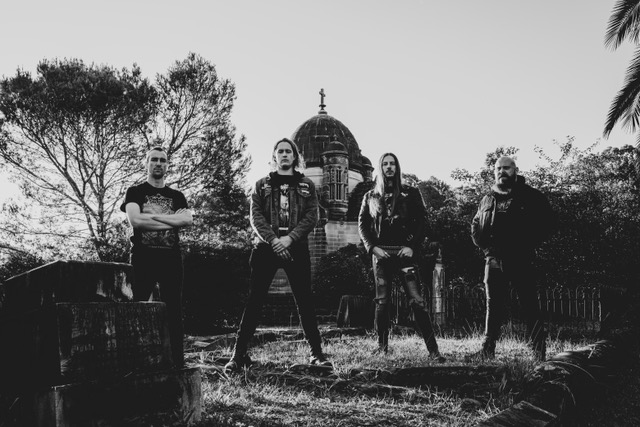 Whether you believe in the divinity of the man that the Romans supposedly nailed to a tree all those years ago or not, there is nothing at Golgotha. The hill where the man Jesus is supposed to have been crucified is, more or less, just a hill. What is left behind is either a testament to the resurrection of everyone’s favorite zombie hippie or a bunch of rocks on a hill.

Taking inspiration from that landmark, Australian death metallers Golgothan Remains may be the least ambiguous thing left behind by Golgotha.Formed in 2015, Golgothan Remains has been building a fanbase off a pair of incredibly exciting releases. The 2018 debut Perverse Offerings to the Void marked the band as a force to be reckoned with in the world of death metal. This year’s Adorned in Ruin cemented them as an up-and-coming voice in the genre. I recently talked to the band about breaking in in a very stacked genre, their local scene, and getting back on the right track following years of COVID lockdowns.

First off, how did the band get started? What made you all want to form this particular band and how did you come up with the name?

Matty: The band formed out of the ashes of a few previous bands with the intent of playing
some real dark death metal. (It) took a while to flesh out the lineup and to be able to then record and play gigs. We came up with the name to match the dark nature of the sound of the band, a reference to the remains of Golgotha, which also includes a cheeky little nod to the masters themselves, Incantation.

What got you guys into death metal initially and who are some of your big influences?

Matty: This is quite a personal question as we of course have all our individual inspirations
and bands we hold dear. However, all of us got into heavy music in our early/late teens and
then explored the more obscure, fast, and less accessible genres of metal following the early inauguration periods. Influences for the band include acts like Ulcerate, Aosoth, Dread Congregation, Abyssal, Incantation, and many more.

Obviously there’s been a few changes but you’ve had a pretty consistent lineup overall. What makes you all work so well as a group and, in the past, what have you looked for in prospective new members when there have been those openings?

Matt: We’re really happy with the current lineup as it stands. We all get on very well, and all
share the same vision for the sound we are trying to achieve. We have obviously had a
couple of enforced changes since the debut, but both have come in and made their mark
instantly. We changed our vocalist and bass player between releasing the first and current
album. With both new members we had the feeling that it clocked straightaway, but there are those moments in an audition you just know the vibe is hitting the spot!

What is the music writing process like? Has it changed at all as time has gone on?

Matt: The process has remained similar across both albums thus far. I generally bring a
skeleton of a song to the guys, which is a roughly ordered collection of riffs. Then together
as a band, we flesh it out, tweak what we need, and transform into complete songs. Then we just refine as we tighten the songs up until we’re satisfied.

What is the lyric writing process like for the band? Do you have any particular inspirations that you’ve turned to over the years? What, to you, makes a Golgothan Remains song from a lyrics and themes standpoint?

Matty: Writing lyrics is, for me personally, an intense and enthralling process. My inspiration and ideas for new songs can originate from a wide range of outsets, like life and emotional struggles, literature, scriptural themes, and anti-religious texts. Song themes and lyrics often come from a personal angle which are then worked out around a story or thread through one or multiple songs. The journey can sometimes be long and treacherous to find exactly what I am looking for to do with a specific text or song, but once it all fits it is the most rewarding. For Adorned in Ruin, the lyrics for each song are more or less standalone, however (they) do form a general coherent story. There was significant time between writing the songs; and therefore thematically some songs have been adjusted over time as well. Overall the main themes and angles are anti-religion, life struggles, and obscure and historical themes.

Matt: Yeah absolutely! It had been such a long process to get to that stage so we were
stoked to be able to lay down a set of songs we were all proud of. And to get the response
that the first album got was also really humbling. Always surreal seeing your music being
heard all across the globe!

What was the recording/writing process like for the new one? Did your process change at all between records? What was your goal with Adorned in Ruin? It’s a great follow-up and a really consistent record in general. How do you feel about the final product?

Matty: We are very thrilled with the album release! The music had been written and ready to be recorded for a long time but the process has been postponed due to multiple reasons, not at the least due to the Plague hitting mankind in 2020. The main goal was to build further on what we created with Perverse Offerings to the Void, improve the songwriting, and create a more diverse, powerful, and dramatic record.

Along with the record is a really cool, ominous, epic cover. Who did that and how much direction did you give them? What does that cover represent to you?

Matt: Chris Cold is the artist behind the grand cover. The concept of the artwork is
something we had in mind for the first album, but only got around to for the follow-up. The
artwork links strongly with the band name, depicting a ruinous landscape, crumbling temple, decrepit collection of bones, and for the eagle-eyed, also includes the rotting hill of Golgotha in the distance!

Did COVID and the pandemic affect the band at all, either in terms of recording music or live plans?

Matty: The pandemic has had a massive effect on the band as the recording and
subsequent release of the new album has been significantly postponed. Further to that, we
have not been able to play a lot of live shows for an extended period of time, however this is slowly improving and we have a lot of exciting plans for the near future. In the meantime,
however, we have all been busy writing new music and working further on the band’s future.

What’s the local scene like for you guys out there? How has the band been shaped by your local environment?

Matty: The scene is Sydney and Australia in general is quite thriving. There are a lot of
amazing local bands performing gigs and, in non-Covid times, international bands visiting
and playing on a regular basis. It’s of course a rather small scene compared to e.g. Europe
or America, but it’s very much alive with heaps of passionate and talented musicians and
dedicated crowds. Of course some venues in Australia have been affected by the current
crisis, however things seem to slowly pick up again. Local and interstate bands like
Denouncement Pyre, Horisonous, Sumeru, Ploughshare, Spire, and many others are good
mates and always an honour to share the stage with. Some of them were the bands we
looked up at and listened to for many years!

Have you been able to play out in support of the record yet and what was it like to get back in front of a live audience after the pandemic?

Matty: We have been able to play a few shows lately, however overall it has been very slow on the live front due to the pandemic for the last two years. We have been playing some material from the new album over the past years here and there, and the general anticipation has been good! We recently performed a few times in support of the new album, and it felt cathartic to finally present the new album now that it has been released, and play all the songs in front of live audiences. Excitement is an understatement, we have all been missing the live rituals a lot and we are more than keen to hit the road again.

Lastly, what’s next for Golgothan Remains? What are your goals for the future of the
band?

Matty: We have a lot planned! We are currently organising a local tour down here in Australia to support the new album, so really looking forward to hitting the road and enjoying that. We are also busy rehearsing songs for a new release we hope to record in the coming months!

Photo at top courtesy of the band.