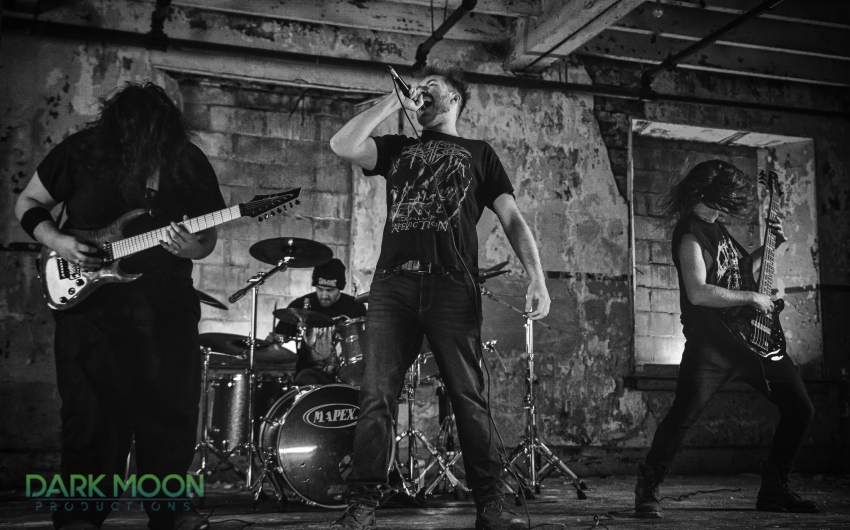 There are very few things that are more exciting within the world of music than a good debut. A solid start for a band is something that should get every fan of the style of music the group plays jacked for what could hopefully be a long and fruitful career. Proficient debuts give you something to jam out to in the present but also hope for the future. Take my word for it, the self-titled debut EP from Ottawa-based Harvested (out May 7) is just that type of invigorating release.

Harvested is, hopefully, a harbinger of great things to come from the Canadian death metallers. It’s tough to really pin the group down to one specific subgenre of death metal, because they display many hallmarks of technical death metal but there are more than a few touches of slam and brutal death metal thrown in as well as simple, old school stylings. That this all works and is pulled off seamlessly is a testament to the band’s proficiency. Early on in the record, it’s easy to see why the band lists their influences as Dying Fetus, Deicide, and Suffocation. While the band is clearly not in that stratosphere yet, the debut record shows enough promise to give listeners a taste of where the band could hopefully end up at with a full-length or two under their belts.

The album starts with the band’s best track, “Apathetic,” and quickly displays those influences front and center without completely aping the bands that inspired them. The opener is a fast paced intro to the Harvested sound with dynamite riffs and changes in pace that will make this a real treat to headbang to live. “Apathetic” also features some absolutely killer lyrics about just how screwed our society is: “Heading towards extinction with our blindfolds on freely, ignoring all the warnings with our hands tied tightly,” Adam Semler growls on the track. This sets the stage for the rest of the album’s lyrical content since, at least so far, Harvested definitely seems like a band that’s more interested in the state of the world and examining one’s own mind than the typical buckets of blood lyrics that a lot of death metal bands feel most comfortable with. Although I love gore lyrics, it’s a nice change sometimes to have a band within the genre get more introspective and well-written, real-life-reflecting lyrics are always welcome when they’re as well thought out as these.

“Bludgeoned,” the album’s second track, is an interestingly named piece because, while it certainly does start with bludgeoning drum beats, it ends up pulling back a little during the track to deliver more subdued bass and guitar solos. It’s a good placement as it is followed then by “Incognitive” which has some very strong Chris Barnes-era Cannibal Corpse vibes, particularly with the vocal patterns Semler uses on the song. “Delirium” then kicks in and, in my opinion, is probably the weakest song on the release. It’s not bad by any means but it feels a little less fleshed out than the rest of the tracks. Album closer “Bereavement” leaves on a high note though with pounding blast beats, furious tremolo picking, and a finale that’ll leave any fan of slam smiling.

Harvested is far from a perfect release but it’s definitely one that has fewer growing pains than you’d expect from a band’s first outing. Although I wasn’t crazy about “Delirium,” the album doesn’t really have a song that’s straight-up bad. Being a debut EP, the band obviously is not quite all the way there as songwriters but this is a very promising debut and a band that you need to keep your eye on. The fact that they’ve established themselves as a group to watch off their debut (and a debut EP, no less) is damned thrilling to me and I genuinely cannot wait to see what these guys cook up when they get around to making their first full-length.