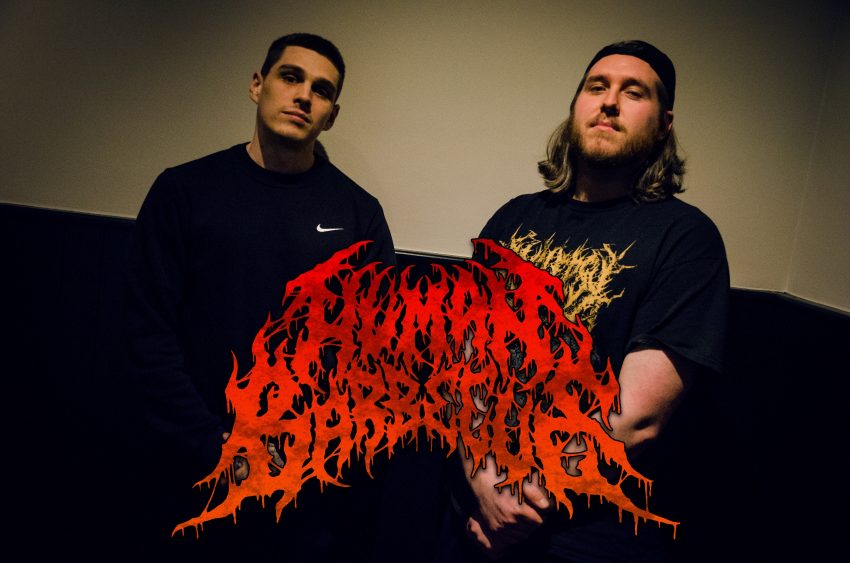 What do you like to barbecue? Sauced up wings? Nice buttery corn on the cob? Veggie burgers with a good seasoning? Human flanks? Ok, that last one might just be for Hannibal Lecter, Leatherface, and a certain Belgium-based brutal death metal band.

Since its formation in 2015, Human Barbecue has been pumping out high-quality brutal EPs and LPs, including 2020’s full-length Bloodstained Altars. Combining brutal, slamming riffs with over-the-top gore lyrics, Human Barbecue is sure to be just what your more primitive side ordered. With all the cool plans on the horizon for the band, there isn’t a better time to be a fan of these deranged cookout artists. I recently talked with the band to get the inside story of one of Belgium’s most extreme exports.

How did the band get started? Has it always just been the two of you and, if so, how did you guys meet and decide to form a band? How did you come up with Human Barbecue for the name?

Jason Lambert: Basically, I was working on my other band Putrified J back in 2015 and out of nowhere, I thought. “Damn, Human Barbecue would be a really cool name for a band!” So I kinda secured it by creating a page and asked a friend to make a quick logo. I recorded a short and bad demo on my own, with almost no guitar skills and BAM, that’s the full story behind HB (laughs). After that, I started looking for a guitar player, since I can’t play. Every release (had) a different guitar player until the Abhorrent Atonement (EP) that Roy (Feyen) did with me. He’s been in the band since this one.

What are your musical influences for the project? How did you guys get into extreme metal in the first place? What is it about brutal death metal that appeals to you?

Jason: Death metal all the way! BDM is a very cool scene with mostly cool/chill people. We just want to do our thing and keep releasing stuff.

Looking online, it seems like you are both involved in and have played in a ton of bands. How do you manage to fit in time for so many different projects? Do you feel like having a lot of different projects helps you to express a variety of different aspects of your creative sides? It must be exciting to have a bunch of outlets for your different musical interests.

Jason: You find the time for the stuff that you really care about. We both work but we don’t have kids or anything. Music is an important part of our lives so we make it work. We try to have all our projects sound different, of course, to create a unique identity for each. We have both been releasing music for some time now and I don’t think we will ever completely stop doing that.

What’s your process like for writing the music aspect of the songs?

Jason: Usually Roy writes the instrumentals and I take care of the lyrics and vocals. We don’t live very far from each other (approximately one hour) but we do our parts on our side. We both work shifts and have other projects so it’s not always easy to see each other.

What about the lyric writing process? You guys have some awesomely grotesque lyrics that are not for the faint of heart, to say the least. What appeals to you about writing lyrics based around horror/gore?

Jason: As the name speaks for itself, Human Barbecue is a cannibal-themed band. So we mostly write about that topic and around it. My good friend Luke Talbot (Secreted) also helps me writing lyrics and correcting my basic English to make sure that those are correct and make sense.

Based on your albums, I’m assuming you guys are horror fans. What are some of your inspirations in general within the world of horror? With streaming services like Shudder and whatnot making all kinds of horror from every genre/decade readily available, do you have any recommendations for readers to check out within the genre (books, movies, games, etc.)?

Jason: I’m a huge horror movies fan, especially ’80s horror. I used many references to write some of the lyrics. I’m still the kind of guy that will buy a DVD/Blu-ray of the movies I like. All major platforms such as Netflix or else have a very very poor horror section. It’s always about shitty spirits horror movies, while there are many, many amazing films around for decades now, I think that (is) a shame. I’m not really reading a lot of books or playing video games so I cant really say anything on that topic. But moviewise, I can only encourage self-research or to check some amazing publishers such as Arrow Video, Vinegar Syndrome, Shout Factory, 88 films.

Being a two-man project, what are some of the benefits/challenges to there just being the two of you? Have you ever considered adding other members or are you set on just you guys?

Jason: A band is a like a couple. It’s not always easy. I strongly believe that the more members, the more issues. So being two in a band (internet band) is pretty easy! We are considering building a live line up for HB but then COVID started and kinda left everything on hold. We are still thinking about this and this might really happen in the near future!

I really like both of your two full-lengths. Each of them have really strong, brutal beats and also great riffing that stands out to me. The drum programming that you do on them is really good too. I heard the albums before I knew you guys did drum programming on them so kudos to you on that. What was the process of writing/recording your last LP, Bloodstained Altars, like? How do you feel that you’ve grown as a band between the records? Being just the two of you, I’m sure it’s a lot of work to get the albums out to the fans but very rewarding once they are out there!

Jason: The process for Cannibalistic Flesh Harvest and Bloodstained Altars were very different. For CFH, I programmed the drums and sent them to Mats Kraanium so he could record the guitars over them. Which really isn’t the easiest way to work so this album is rawer. For BA, Roy wrote the riffs and thought the drum programming all on his own. Different people/different way to work. We used the same way for the upcoming album! It makes more sense.

What is the brutal death metal scene like there in Belgium and what has the community been like for you guys? It seems to me like it’s going pretty strong and has produced some really solid bands and albums over the last few years.

Jason: Some really cool bands and people in Belgium. Its a small scene so you always see the same faces. Everybody seems to support each other!

Both your albums have incredibly gory covers. That’s a real hallmark of the genre but yours stand out and definitely fit the band name perfectly. How did you come up with them and who made them?

Jason: We work with the Russian artist ARMAADA for our arts. Been working with him for a few years now with different projects and we understand each other! Gore is of course a hallmark in the scene and it also fits Human Barbecue!

We only never want to use nudity/sexual explicit images like a lot of brutal bands do. We dont really back that kind of stuffs and it’s just not us. Doesn’t really fit the band theme either.

Lastly, what’s next for the band? What are your goals for the future of the project?

Jason: More releases and a live line up to play only a few selected shows per year. Hopefully this will work out and happen!