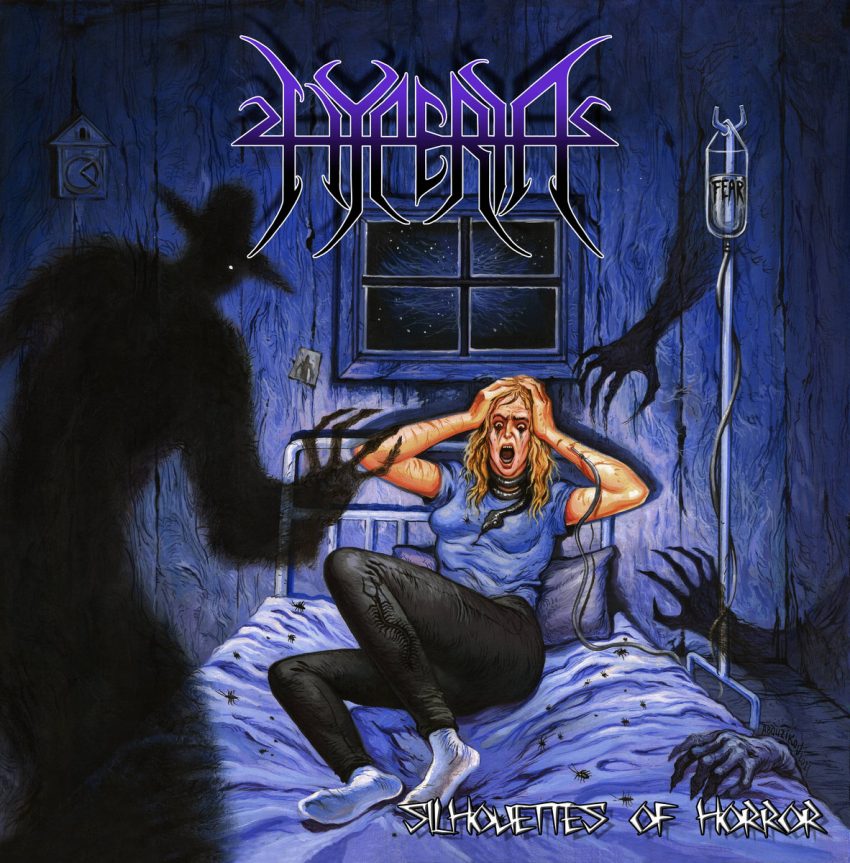 Nightmares stick with you. You wake up with sweat dripping down your back and a noise halfway between a pained wail and a terrified scream lodged in your throat. The bathroom is calling you now that you’re awake but that hallway is awfully dark and, although you’ve walked it a million times, those oh-so-familiar features don’t look oh-so-familiar now that you’ve just barely escaped the twilight world of your unconscious mind. You’re awake now but are you? I mean, you’re pretty sure that you are but who can tell? Maybe waking up was a fake out and this is still part of the nightmare. Maybe that hallway isn’t as empty as you think it is. This world between waking and dreaming, where nightmares seem real and what bumps in the night can’t be taken for granted as a figment of your imagination, is the world of Hyperia.

Hyperia, formed in Canada in 2018, has been steadily releasing consistent melodic thrash records since its inception. The 2019 EP Fish Creek Frenzy introduced the band to the world at large before 2020’s debut LP Insanitorium put the band squarely in the sights of thrash lovers worldwide. Now, with this year’s excellent follow-up full-length Silhouettes of Horror, it should be readily apparent to anyone paying attention that the band’s early hot streak is anything but a fluke. We recently caught up with the band to discuss the record, Canada’s metal scene, and the nightmarish inspirations behind the band’s songs.

How did the band get started? It seems like you’ve had a pretty consistent lineup, how did you all meet/decide on starting a band? Where did the name Hyperia come from?
Colin Ryley (lead guitar): Hyperia was started by Marlee (Ryley, vocals) and I in 2018 after getting back from over a year of traveling. I hadn’t touched an electric guitar the whole time and was desperate to get back to playing metal and wanted to hit the ground running. We made our vision quite clear and were able to find members rather quickly and start recording and playing shows in our hometown. Scott (DeGruyter, bass) was an old co-worker of mine who I knew played guitar, but after asking him to play bass he accepted! Dave (Kupisz rhythm guitar) was a friend of Marlee’s in the local metal scene. The name Hyperia is really just a combination of the words “Hyper” and “Hysteria” which we thought was a good fitting name for our style of music. We found out much later that it is also the name of some Greek mythological character.

What was it that got you all into thrash metal in the first place and who are some of your influences?
Colin: We all have always been huge fans of the pure energy that thrash metal emanates. Every time we listened to thrash, we all just wanted to party and have a fun time. There’s something very cathartic about the genre and it’s hard to be sad when listening to a good thrash record. My personal thrash influences are Havok, Stone, old Lost Society, Warbringer, Municipal Waste, to name a few!

What’s the local metal scene like up there in Calgary?
Colin: Calgary’s metal scene is awesome. It really is one big family and the vast majority of people are super supportive and are always going out to local shows. We actually relocated to Vancouver, Canada in September 2020, and the Vancouver scene seems just as great. We can’t wait to start playing more shows here and back in Calgary in the near future!

For the music, I think your description of melodic thrash is an apt one. It’s a unique style that definitely stands out. Whats your writing process like for the songs and how would you describe the Hyperia sound?
Colin: As much as I love thrash metal, I also take a lot of influence from melodic death metal bands. All of the members in Hyperia also enjoy a wide variety of other sub-genres of metal, which I think adds to make our sound a little more unique. Our bassist Scott, for example, loves speed metal and NWOBHM bands, and Marlee takes inspiration from lots of different styles of music. Our songwriting is typically done by myself sitting at my computer and recording a bunch of random riffs I think up, then re-arranging them with programmed drums until something cool lines up. Dave also sends me a bunch of standalone riffs he writes for me to incorporate into the music.
Scott is responsible for all his bass lines, as well as Marlee for her lyrics/vocal melodies. From a song’s demo inception to the finished product is always quite different once everyone adds their flare to it, even though the riffs themselves don’t change much.

For the lyrics, you have some really cool ones and seem to really focus on telling a story with them. What’s your lyric writing process and do you have any particular inspirations for them?
Marlee: I’ve enjoyed writing stories since childhood. My writing process is basically writing a story or an idea and then taking the story and making it into lyrics. I tried to be a bit more diverse with my lyric structures for this album as well as how they fit to the music. This album has a lot of personal influence from my experience with sleep hallucinations among other things. It helps sometimes to have someone give you an idea to roll with if you are having writers block.
Colin came up with some ideas regarding a couple of the songs as they were inspired by government experiments like LSD trials in the ’50s. (“Experiment 77”).

Speaking of the lyrics, you’ve got a real interest in horror. I love how horror and metal really go hand in hand and how many bands are inspired by the genre. What appeals to you about horror and what’re some of your favorites from the genre (books, movies, games, etc.)?
Colin: I think the whole band appreciates the darker and spookier sides to a lot of entertainment. It’s something that really draws you in if done well. Particularly with us, most of the songs on Silhouettes Of Horror are based around personal experiences Marlee has had with things like night terrors and Hypnagogia (hallucinations between wakefulness and sleep). The song “Whitecoat” is also loosely based around Stephen King’s novel The Institute, which is about the government harnessing psychic abilities from children. I think the horror genre appeals to a lot of people because the stories are real enough to happen to you, but also hopefully never will (laughs).

The band has been on a really strong run of getting material out to the fans. What’s fueling your creative fire right now and how do you keep things going at such a strong pace? How do you feel you’ve grown as a band across releases?
Colin: The silver lining of COVID was that it gave us, and many other bands, the time to focus on writing and recording new music. Without having shows/tours, it’s really the only thing you can do to remain significant as a band. I also think the pandemic gave me lots of time to explore new bands, which definitely helped give me some inspiration. Right now our creative fire is being fueled by the desire to start playing live again. It was great having all the time to focus on making an album but we are all restless to get back out and play shows again.
We feel that this new release shows a bit more of the maturity we’ve gained as musicians. We’ve had more experience with each other as musicians and I think the songs are a bit more cohesive, rather than just a bunch of riffs thrown together.

The new album, Silhouettes of Horror, is a hell of a good time and another really theatrical thrash record. What was the writing/recording process like for that one? How would you describe the new record?
Colin: Thanks for the kind words! We’re glad the theatrical part comes across even over a recording, as it’s something we always want to accomplish live as well. The writing process was relatively the same as Insanitorium, although this time around three of us (Marlee, Dave and myself) all lived together, which made practicing and rehearsing certain parts easier than before. We were also way more meticulous with getting great takes for each instrument in this album. We really wanted to capture the performance live rather than having to edit excessively later on. Gord Alexander (session drums) also laid down an amazing foundation to grow on and definitely helped us step our game up for this album.

You’ve got some really cool album covers that feel heavily inspired by classic thrash covers of the 80s/90s. How do you come up with the concepts for them and who does them?
Colin: Marlee usually comes up with the ideas for the artwork based around her lyrics, and then the whole band gives input to embellish the art further. The artist Andrei Bouzikov is a legendary thrash album artist for a reason! We typically put together our ideas as bullet points and then draw up a very rough sketch of the album, and then Andrei multiplies it by 1000. He also hand paints all his covers, which we feel gives it a really cool and different look.

Lastly, what’s on the horizon for Hyperia? What’re your goals for the near future of the band?
Colin: Right now we are just focusing on playing as many shows and touring as much as possible. We recently got a new drummer, Steve Maloney, who has been adding even more flair to our songs for live shows. We hope to tour down through the U.S and Europe in the near future if the world allows it!

Check out the band’s music video for “Operation Midnight” here and be sure to follow Hyperia on Facebook to stay up-to-date on all their latest news.