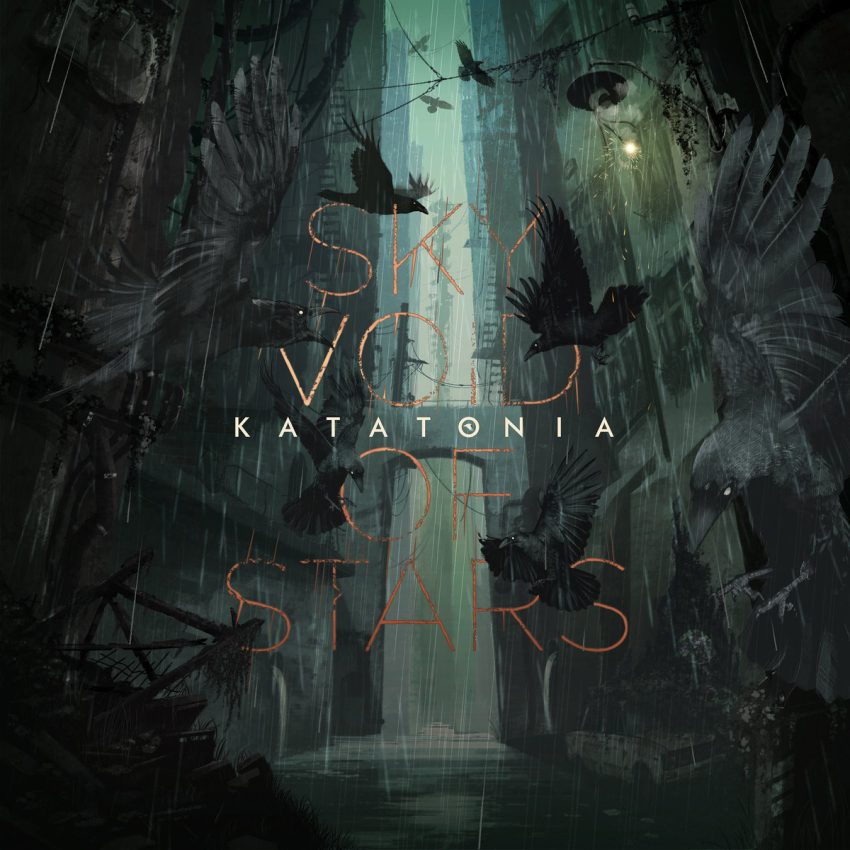 Katatonia’s latest album showcases the experience of a band that’s been at this since 1991 while also remaining completely comfortable in the hard-rock lane they’ve been in since the release of 1998’s The Discouraged Ones.  There are 11 tracks and no surprises on their new album, Sky Void of Stars.

The new release wastes no time getting going.  There’s no intro, and the first track “Austerity” jumps right in with an urgent beat and lead vocalist Jonas Renkse immediately singing “I thought things would take off / But they cooled down.”  The song certainly doesn’t cool down though, keeping up the quick tempo throughout the song. Drummer Daniel Moilanen and bassist Niklas Sandin drive the song forward, and guitarist Roger Öjersson gets a quick solo that’s neither too showy for the song nor an unimpressive let down.   It’s an interesting (not bad) choice to start an album with, and feels like a song that most other bands would put somewhere in the middle of an album after building up steam, but the band goes full-force right from the start with one of the stronger songs of the album.

On their website, the band describes the album as “a manifesto for the hopelessly hopeful amongst us” and the Renkse provides plenty of vivid, emotional poetry for commiseration.  In “Opaline” Renkse sings “I had a futile dream / It rose from loving you / But the debt has broken my back” and you feel the pain of heartbreak with his voice and lyrics.  Renkse provides more standout lyrics for the suffering on the track “Drab Moon” with the lines “But you shake my blood like a raging sea / So I’m bound for the joy of sorrow / If you go there with me.”   While the band may no longer have the doom-metal sound of their early releases, their music and lyrics are still much heavier than anything that’s popular in today’s brand of mainstream pop hits, and Renkse’s words  provide plenty of fodder for those of us on the gloomier side of life.

The title of the album comes from the stand-out song on the album, “Author.”  The song tells of an “author of scars” that shifts “into a looking glass /  a sky void of stars.”  It’s another filled with great imagery that affects your senses. The band is really showcasing a positive example of what decades of crossing the line between metal and rock can do with this track.  After each verse, there is a heavier section of music that will appeal to most metal fans while not alienating people who are more into rock than metal.  Once again, Öjersson gets a nice guitar breakdown to showcase his skills.

The album starts to lose a little steam towards the end, since the album doesn’t take any risks and has a similar sound to the previous releases. The album’s official closer “No Beacon to Illuminate Our Fall” (some formats have the bonus track “Absconder) isn’t a bad song overall, but it clocks in at a little over 6 minutes on an album where every other song is between 3 to 5 (okay 5:12) minutes, so you start to feel the run time the song is over.

Ultimately, Sky Void of Stars is a pleasing dip back into a pool that feels musically familiar if you’ve listened to any of their previous work over the last 20 plus years or so.  Katatonia is a talented band that has found a hard rock formula that works and doesn’t seem interested in changing what works for them  at this point in their career.  Ultimately, fans who have stayed with them to this point in their discography will most likely enjoy this new album.