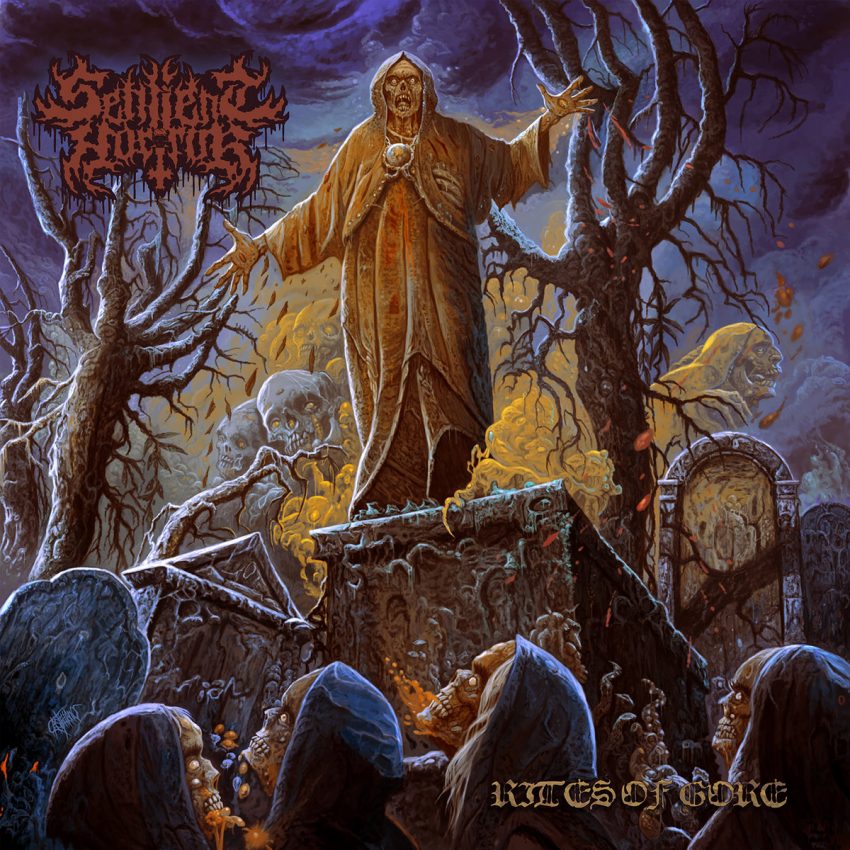 Horror and death metal go hand-in-hand. Just looking at the name, death metal, should obviously be a clue that this is a type of music that caters to the darker side of life and draws from the same wells of terror that the horror genre does. Both art forms are littered with broken bodies, viscera, and monsters too strange and bizarre to really comprehend. If the horror itself were to take on a mind of its own, gain sentience say, then there aren’t many bands that would be more appropriate a soundtrack to its life than Sentient Horror, the New Jersey based death metal act.

Sentient Horror, which formed in its current incarnation in 2016, has steadily been making a name for itself over the past six years. Starting out with two promising albums, 2016’s Ungodly Forms and 2019’s Morbid Realms, certainly helped put the band on many death metal fans’ radars. This year’s Rites of Gore helped to firmly establish the group as a force within the old-school death metal scene. I recently talked to vocalist/guitarist Matt Moliti about his band and what makes Sentient Horror work so smoothly.

First off, how did Sentient Horror get started? How did you guys meet and what made you all want to form a death metal band with each other?

Matt: Sentient Horror got started as a demo that I made back in 2014 under the name “Sentience.” I programmed the drums and did all the guitars, bass, and vocals myself. The goal was for me to use the demo to attract other players to form a band with. I actually listened to the demo again recently for the first time in a long time and it is very different from what Sentient Horror would become. Even though the title track of the demo, “Beyond the Curse of Death,” would appear on the first Sentient Horror full-length, Ungodly Forms, the other two tracks are definitely more progressive death metal in the vein of later-era Edge of Sanity. I still like that style, but I felt that the more straight-ahead old school death sound was more appropriate for live performances.

Sentient Horror has gone through some lineup changes since the initial band, our longest running member besides myself being rhythm guitarist Jon Lopez, who joined shortly before the release of Ungodly Forms. He didn’t play on that record, Tom Maher, who was the rhythm guitarist in Sentience did. But Jon has been on every album since our EP, The Crypts Below. Our current lineup also consists of Tyler Butkovsky on bass and Evan Daniele on drums. Both Tyler and Evan have been in the band since 2018, with Evan taking a brief hiatus from 2019-2020.

What got you into death metal in the first place and who are some of your big influences?

Matt: In my teens and early 20’s I was really into progressive metal and shred guitar playing. Guitarists like Yngwie Malmsteen, Michael Romeo, Jason Becker, etc. I had heard some melodic death stuff, but the tech bands started coming out in the late 2000’s like Necrophagist and Obscura, and I was really into the guitar playing on those albums, because it was so similar to the guitarists I was into. From the tech bands I had started checking out the bands that had influenced them, like Death and Carcass. I had also discovered bands like Opeth and from there went to Edge of Sanity because I would always see them associated with each other. So Edge of Sanity turned me onto the old school Swedish scene, and it was only a matter of time before I discovered Dismember and Entombed.

Matt: Not really. I write pretty much everything, music and lyrics, but sometimes Jon will send me a riff that winds up getting used in a song. We will always iron out arrangements as a band in rehearsal, though.

Matt: As far as lyrics, I’m actually mainly influenced by King Diamond. I really like how his songs tell horror stories, and I’m very inspired by that aspect. I try to do something similar in the Sentient Horror lyrics, each song playing out like a mini horror film.

You guys have a lot of really cool horror imagery both in your lyrics and on your covers. What draws you to the horror genre and what are some of your favorites within the genre (books, movies, games, etc.)?

Matt: I have been into horror films ever since I was a little kid with my dad showing me the classic Universal films, and taking me to comic conventions and underground sci fi/horror memorabilia stores like Forbidden Planet in NYC. This is back in the late 80’s/early 90’s so its not like this material was easy to find. There were lots of campy, strange B movie and imported Japanese Kaiju films, lots of bootlegs. Everything was just so weird and fascinating to me. I liked the practical effects. I thought the monsters, gore, etc. were so cool. That side of it really attracts me, what goes into the creation of these films.

As far as films go, some of my favorites are The Thing, Halloween, Day of the Dead, Return of the Living Dead, Hellraiser, and The Texas Chainsaw Massacre. I really like HP Lovecraft’s short stories, and I’m an avid horror gamer. Silent Hill 2 and the Gamecube Resident Evil remake had a big impact on me when they came out.

You’ve had a few changes to the lineup over the years. What do you look for in a potential new Sentient Horror member?

Matt: Location, being able to rehearse with us on a regular basis. Shared interest in bands, because you have to know where we are coming from with our influences. Being on top of the material and taking it seriously. And we are all really mellow, chill dudes, so someone who is compatible with our personalities.

Your debut, Ungodly Forms, was a hell of an opener for the band. What was it like to get that first recording done and what did you learn from the process? How did getting to record that one cone about?

Matt: It was kinda stressful because we were in between drummers, so the whole album is programmed drums. And then right after tracking rhythm guitars Tom (former Sentience guitarist) left the band.The main thing that I really took away from it was learning to pace myself when tracking the vocals. It was the first time I had to do an entire record of death vocals and it is very easy to blow your voice out quickly if you’re not taking a lot of rest, getting fluids, etc. It is still something I struggle with in the studio, getting vocal performances I am really happy with. Its very different from playing live because on stage you can kinda pull back a little in spots and maybe not go as hard to conserve your voice, but on record you need to be at full 100% constantly. So it is very easy to tire out if you’re not careful.

The most recent record, Rites of Gore, is another damn great death metal record. What was the writing/recording process like for that one? Do you feel more comfortable now, three albums deep, getting what you want when you step into the studio to record?

Matt: Initially, it was a tricky album to start writing. It was during lockdown, so for a while we weren’t even able to rehearse, and the momentum of releasing Morbid Realms was totally killed. So I wasn’t feeling super inspired, but I knew I had to start writing. It was the first time I ever had to do that. I mean, it’s a part of the professional music world, you have deadlines to meet, sometimes you just have to start with zero inspiration because it simply needs to get done. But this was the first time I had to do that, and it felt difficult, I wasn’t sure if I was coming up with quality material. As I got a few songs in, I felt more and more confident in what I was coming up with, and now I’m extremely happy with the finished product. I’ve even seen a lot of reviews and comments from fans that they think it is our best album yet.

I imagine the positive reactions to the new record have to be very gratifying. What has the reaction to the album meant to you and how do you feel about the final product?

Matt: It is very satisfying especially given how tricky the album was to write initially. I’m definitely happy with the record. I like the direction it took and I see us continuing in this more aggressive way.

The cover on that album really stands out to me but all of your covers are great. Who did the newest one and how much direction did you give them? To you, what does that cover represent?

Matt: That is once again done by the masterful Juanjo Castellano. He did the covers for our EP (The Crypts Below, and our 2nd record (Morbid Realms)). I usually give Juanjo an idea of what I’d like and he runs with it. Since the lyrics on this record are heavily rooted in classic horror, I wanted a figure on the cover that was “Crypt Keeper” style character, or like the mascot for the Creepshow movie (another favorite of mine I forgot to mention earlier!). Something interesting happened though, as Juanjo gave me his sketch back before I had started writing lyrics, so I actually used his sketch and his description of it as a basis for the lyrics of the title track, Rites of Gore.

How much did the COVID pandemic affect the band, either in terms of recording or live plans?

Matt: As I mentioned briefly, it totally killed the momentum we had with Morbid Realms. We were able to get two shows in before everything got cancelled. It is a shame, because I was/am so proud of that record, and it didn’t get a proper round of live support. We are still featuring songs from it in our current live set, but of course we had to clear some room to focus on Rites of Gore material.

Have you guys gotten to play live again yet?

Matt: Yeah, we’ve done I think four shows since restrictions started lifting. It’s been great to play live again and we have steady shows booked into the fall at this point. I think the new songs are going to translate really well live.

Lastly, what’s next for Sentient Horror? What are your goals for the next few years?

Matt: To continue making new albums on a regular basis. Our day jobs make it difficult to do any kind of regular or extended touring, but we are playing more regionally now, and hopefully we get a good opportunity to travel a bit as well.