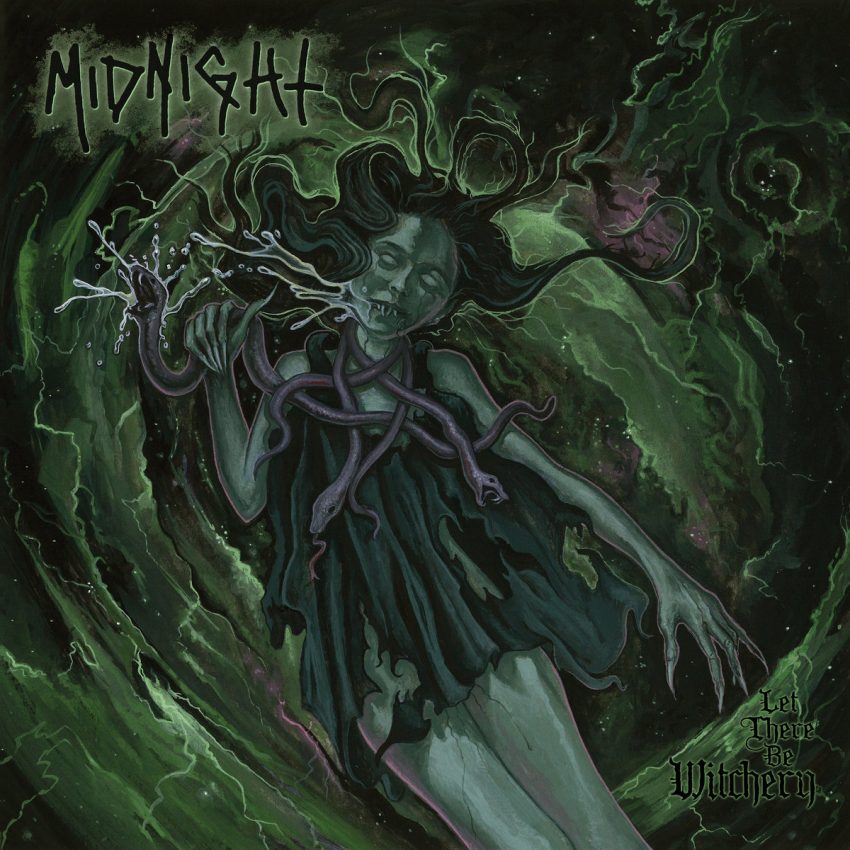 “Your brains are slaughtered. In this hell, they have no use. Burned on site, bestial beast on the loose” Athenar howls to start the band’s fifth full-length, Let There Be Witchery. It’s as good of a mission statement as any for the newest creation from Midnight, the one-man band from Cleveland. Midnight releases tend to be affairs of the gut and loins more so than of the brain and this latest is no exception. With song titles like “In Sinful Secrecy,” “Let There Be Sodomy,” and “Szex Witchery,” any thought of this being a less carnal outing for the band than its previous releases due to the relatively subdued (for Midnight at least) cover are quickly laid to rest. When Athenar lets you know in the album’s second track, “Frothing Foulness,” that “ravish rapture, it’s only begun,” you can be sure he means it.

Coming just two years after Rebirth by Blasphemy, the newest album marks the quickest turnaround time for Midnight yet but potentially signifies a new era of creative excellence for the band. There hasn’t been an album by Midnight that I’ve disliked but Rebirth by Blasphemy was far and away my least favorite LP from the band. It’s hard to put my finger on specifically what about that one didn’t grab me as much as Satanic Royalty, No Mercy for Mayhem, or Sweet Death and Ecstasy, but it felt less inspired and failed to make much of an impact on me, although I by no means consider it to be a bad album. Let There Be Witchery, however, has gotten me fully back onboard and feels like the band’s most worthwhile release yet.

While never exactly a black metal band, the blackened speed label has been a pretty apt one to saddle Midnight with. The band has always had more than a passing resemblance to groups like Venom and Hellhammer and it’s easy to draw a line between bands like those, as well classic speed bands like Motörhead, to Midnight’s work. Athenar does nothing here to eschew that feel and again pairs it nicely with his typical lyrical flair for the blasphemous pleasures of the flesh.

The album doesn’t waste any time in demonstrating why this is a band that’s doing nothing but gaining more traction within the metal community. Fast and furious riffs and infectious choruses litter the release, with songs like “Frothing Foulness” and “Szex Witchery” immediately sticking in your head with no signs of giving up real estate there any time soon. Athenar treats listeners to blistering solos on songs like “Nocturnal Molestation” and “Villainy Wretched Villainy” and vocals splattered throughout that owe as much in delivery to hardcore punk as anything else.

I’ve never thought that Athenar was anything less than proficient instrumentally but his compositions and arrangements here feel like a leap forward from previous releases. His writing on Let There Be Witchery provides more variation within tracks without sacrificing any of the down and dirty scuzz that has become a trademark for the band. The grunts that start off “More Torment,” not to mention lyrical content that you’re not going to want to discuss at Sunday dinner with the folks any time soon, should help you rest assured that Midnight doesn’t have any plans to leave the sleaze in the past in the foreseeable future.

Like previous releases, this one clocks in at a brisk running time (35 minutes) and doesn’t overstay its welcome. There’s nothing here that really feels like filler and nothing jumps to mind as an outright bad track. There are some that I prefer more than others but, as a whole, this thing is a blast to crank and headbang along to. You can already tell that these new tracks are going to absolutely kill live when Midnight hits the road later this spring with Mayhem and sprays its brand of venomous foulness all over the crowd. Midnight has been a band I’ve enjoyed everything from but I’ve been kind of waiting for them to take the next step. With Let There Be Witchery, Midnight takes that jump and leaves a trail of all kinds of bodily fluids burbling in its wake.

1 thought on “Midnight – Let There Be Witchery Review”