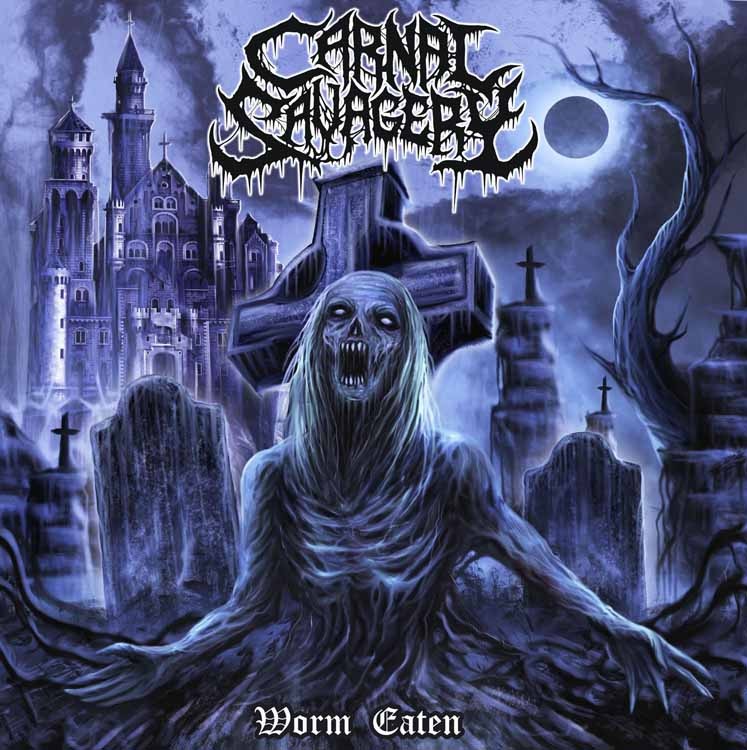 Let’s face it, extreme metal is not a genre for the faint of heart. Between the ravenously hungry living dead, the slaughter of nuns, and the blazing fires of Hell, extreme metal is something that you don’t get into if you’re wired like everyone else. If you want to play it safe with music that your whole family can get into, maybe look somewhere else. If, like the rest of us walking the Left Hand Path, you need your bread buttered with a little blood and brain matter, death metal bands like Carnal Savagery are just what the doctor ordered.

Hailing from Gothenburg, Sweden, Carnal Savagery has been making gore-splattered death metal since 2017. With plenty of time on their hands during the pandemic, the band has put out four records since 2020, including two in 2022. Between Scent of Death and Worm Eaten, Carnal Savagery just closed out a rather busy year. With a new year just dawning, the band has no intentions of slowing it down any time soon. I recently caught up with Mikael Lindgren (drums/bass) to talk about the band’s hot streak.

First off, what is the origin of Carnal Savagery? What made you want to tackle this kind of band and how did you all meet?

Mikael: We are all friends since we were little kids, from the north of Sweden. We also played together in a band called Cromlech between 1988-1994 back in the days. Then, just like that, several years later we decided to start this band again because we missed a lot with having a band. For example, in the early ’90s, we opened up for bands like Entombed, Dismember, Therion, Tiamat, Merciless, Meshuggah, etc., etc. So we missed playing live and all the things about having a band. Unfortunately we have had a lot of problems with our members in this band, and also COVID destroyed a lot when it comes to playing live, so we have focused on making music instead.

Mikael: First we thought of using Cromlech, but since a few bands already have used that we decided to start fresh with a new band. Carnal Savagery to us stands for brutal slaughter/barbaric or something like that, we thought it was ok, also there was no band that had or [was] using it [that] we noticed.

Mikael: First album I ever bought was Kiss’ Creatures of the Night, I guess in 1982 or something. Since then I’ve been stuck to metal! When it comes to that part that I wanted to start playing instruments, I would say Metallica and Slayer on that question, Master of Puppets and Reign in Blood albums. Regarding death metal, I would say Death and Possessed, etc. put us on this path. Also all [the] tape trading back in the days.

Mikael: Ain’t much of a process, really. But I spend a lot of time writing music when it’s necessary. Most of the time we get ideas when we are in the studio and recording albums. Then you hear things that should have been like this or that instead.

What’s the writing process like for the lyrics side of things? What do you try to do with the words to a Carnal Savagery song and is there anything that you turn to in particular for inspiration?

Mikael: Some songs are written from facts from serial killer documentaries/Wikipedia. Otherwise I just make up some stories. The more insane it is, the better we think!

What was the process like to record the debut record, Grotesque Macabre? Were there any challenges with that first record and what did you learn from the process that you’ve used on records afterwards?

Mikael: On the first album, we hadn’t used a metronome ever while recording drums, so that was a challenge and it didn’t turn out that good either, otherwise it was just fun to be in a studio again. Also after that album we decided to tune down the guitars more and we also decided to fix a lead guitarist to the band. And every time in the studio we learn something; we get better and better on our instruments every time.

In around two years, you guys have put out four high quality records. What’s fueling that creative fire at the moment and how are you guys able to get so much music written and recorded so quickly?

Mikael: Thanks! I was unemployed during the COVID period so when all my friends/family were at work, I practiced on drums and made music. I wrote like 50 songs in 10 months, then we did some [of the] best from those 50 to Fiendish and Scent of Death. Then, after all songs are ready, I really prefer to record them [ASAP] otherwise you just get bored/tired of the songs and start to change pieces here and there, or even worse delete songs, even if they are good.

What was the process like for recording the most recent record, Worm Eaten? Four records in, is it easier or harder to make albums with the experience behind you but also the goal of not repeating yourself?

Mikael: I would say it’s harder to write music the more songs you create. You don’t want to repeat yourself, like you say. Scent of Death was a much faster album overall then Worm Eaten. So I think when we write new music, it forms a bit after what you did the most recently, and that you look for some changes, new fresh stuff that sounds different than before.

I wanted to ask about the musical and lyrical inspiration for a few songs on that most recent album. How did you come up with the idea for “Masticating Maggots?”

Mikael: [“Masticating Maggots”] was written directly after our debut, Grotesque Macabre, for Fiendish, but we didn’t use it for that album because of different reasons, I guess most because of the Slayer-influenced parts. Lyrics are just some made up story about a mental freak who eats dead flesh!

How about the story behind the lyrics and music for “Return of the Rotten Dead?”

“Miasma of Putrid Decay” is another one that I dug a lot. What’s the inspiration behind that one?

Mikael: [The] “Miasma” lyrics are a mix between facts from Ted Bundy and Ed Gein.

Lastly, how about the inspiration behind that closer, “Slaughtered Dead?” I thought that was a hell of a piece of music to leave the listener on!

Mikael: That song is the bonus on the CD. I like the chorus alto myself on that one. A bit more Florida old school death metal also on that one.

That cover to the album really jumps out to me as well. Who did it and how much direction did you give them? To you, why does that image best represent this album?

Mikael: Hand Rot Art made the art, look him up on Instagram. It was we that told him that we wanted this and that, like what colour and a zombie rising from the grave etc, but he always does his own style to it. We want to have like a zombie dude on all our albums, like Eddie with Iron Maiden, I think we will keep on with that part and also change colours on all albums.

What’s the scene like for you guys where you live and how has that affected the growth and development of the band?

Mikael: We live in Gothenburg, Sweden. Because of massive problems with our ex-members, it has been nothing but problems in this band so we have not been a part of any scene, just recorded albums.

Lastly, what’s next for Carnal Savagery? What are your goals for the future of the band?

Mikael: We will enter the studio again in February for the recording of a new album. Also we will start looking for new members so we can play more live in the future. Today it’s only me  and the singer (Mattias Lilja) in the band. [It] shall be nice when I don’t need to play everything by myself also.