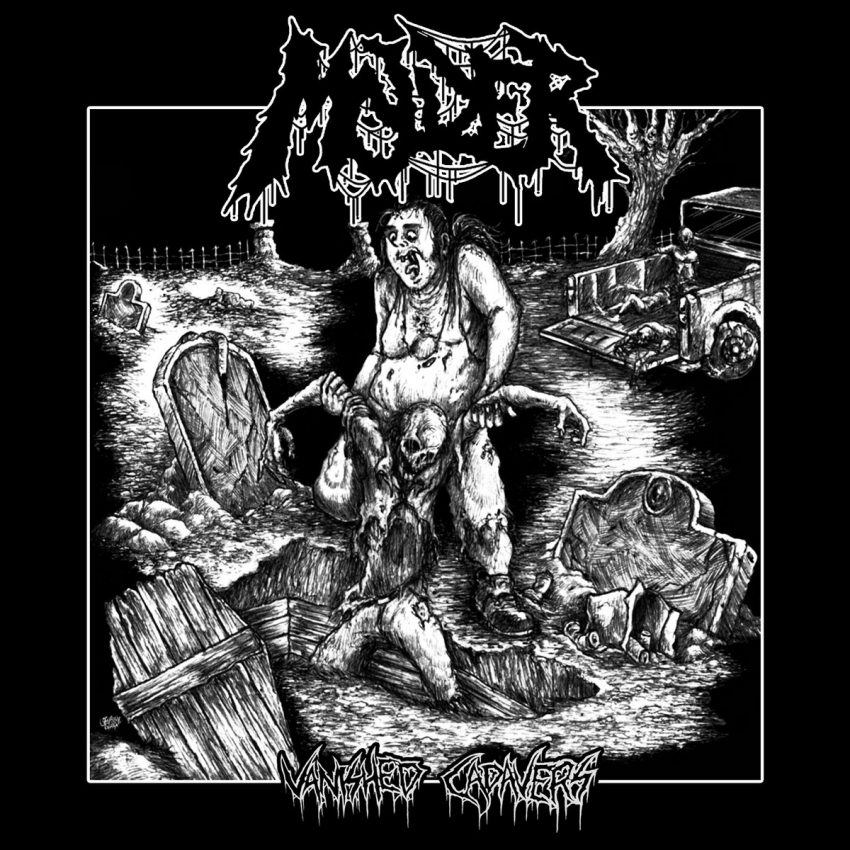 When something molders, decay sets in. Neglect leads to the slow process of disintegration to the point where what you’re left with is a decomposed mess, barely recognizable as an object once valued and vibrant. It’s a process akin to rot setting in in the heart of an abandoned or forsaken entity. This deleterious mechanism of slow destruction is, fortunately for midwestern fans of death metal, a bit of a misnomer when it comes to Illinois-based band Molder.

Molder, who started as a band playing what they refer to as pus-riddled death metal in 2017, is one of the more exciting young bands to come out of the midwest in some time and one that doesn’t show any signs of decay. The band has released a plethora of live, demo, and split recordings in addition to their excellent full-length debut, 2020’s Vanished Cadavers. Seeing the band live, as I did in November of 2021, it’s easy to forget how young the band is during their incredibly honed and killer live sets. For a band this young and with this much talent behind them, there’s really no telling how far the group will go within the world of death metal. I recently caught up with vocalist/guitarist Aaren Pantke to talk about the band’s history as well as what fans can expect in what promises to be a busy 2022 for Molder.

First off, how did the band get started? I know that Dom (Vaia, bass) and Aaren have been in it since the start, how do you guys know each other and what made you want to start a band? How did you decide on the name Molder?

Aaren: We met one another through high school and doing rigging/stage hand work at one of our local venues. Molder came about out of necessity as our projects at the time dissipated, and the itch to continue playing music did not. The name is just another synonym/verb for rotting/decaying, NOT an X-Files reference.

How did you guys get into extreme metal and what is it about death metal that appeals to you?

Aaren: Overall, we all had someone or something that turned us onto heavy music. But ultimately, self discovery. As like minded as we are musically, we definitely have our own tastes/preferences. That said, I think we all dive deep into our preferred styles in many ways, whether it be internet blogs, going to shows, buying new music from underground labels, etc. The appeal speaks for itself. In our eyes, it is the purest form of extreme metal. Just absolutely filthy.

Who are some of your influences within the genre and outside the genre?

What is your writing process like for the music aspect? Do you have a primary songwriter or is it a collaborative effort?

Aaren: While (I) primarily write the lyrics and most of the riffs, everybody contributes heavily in their own way. Molder’s sound is due to all of our creative input coming to life as one unit. Since solidifying the new lineup, writing duties are split fairly evenly.

You guys definitely display a lot of classic death metal traits in your music but there are clear thrash elements as well with what feels like more atmospheric moments at times too. I love your description of pus riddled death metal. How would you describe the Molder sound?

Aaren: Exactly that! Haha. We all definitely love punk and thrash metal and we try to make that apparent in our music. We’ll let everyone else do the caveman stuff or Incan worship, we just can’t pull that stuff off haha. Our wheelhouse (is) dbeat infused, riffy, hooky, FUN metal, if that sounds like your thing… give it a go.

What about the lyric writing process? You guys have some awesomely grotesque songs. What about horror and gore themed lyrics appeal to you guys? Do you have any big influences within the world of horror…specific movies, books, games, etc?

Aaren: They’re nuts! You can really push the envelope, or not at all. Just fun shit to sing about honestly. We like writing insane weirdo shit like grave robbing and fucking corpses. Why?  Because it fucking rules and its better than ACTUALLY doing it. Right?…

Vanished Cadavers, your first full-length, is a hell of a debut. What was the writing/recording process like for that one? The production on it is great and definitely makes it feel much more distinguished than a lot of first albums. Where did you record and how did you get such great sound on it?

Aaren: Vanished is the result (of myself), Kyle, and Dom hammering out enough new tunes to mix with the old demo songs. “The people” really wanted a full-length, so we gave it to them. We think we chose the best demo tunes and wrote some seriously sick new tunes to fill it out. We were fortunate enough to record that with Reggies Rock Club’s in-house sound extraordinaire Cheyenne Brandt. She nailed the mix, and then Cody over at Fix My Face mastered the thing. The sound is a result of shitty gear, and masterful sound engineering by Cheyenne and Cody.

The cover for that one is also pretty memorable. The gory scene on it is really well done and I think the choice to do it in black and white really makes it stand out. Who did that and how did you guys decide on the design/theme?

Aaren: Nev at Gruesome Graphx absolutely nailed the cover. We chose black and white because it looked so great inked before any color. Conceptually we of course wanted the cover to represent the title track, “Vanished Cadavers”. The song is essentially about grave robbing, but taking the entire fuckin corpse.

You guys also have quite a few live releases so far and they all have pretty killer sound. What’s the key to getting such good live recordings down? I assume being at Reggie’s helps for the ones recorded there. That’s easily my favorite concert venue and the sound quality is a huge part of that.

Aaren: Cell phone recordings, and audio from camera footage were really all we used up until the 4-way split with Nucleus, Rotted, and Cryptum. That was recorded at Reggie’s directly from the board and mixed and mastered by Cheyenne, who did both of our full-lengths and Necrobiome demo. Reggie’s sounds great, so it was a no brainer to use that audio.

I talked to Coffin Rot recently and sent them some interview questions as well. You guys have put out a split and a live album with them. How did that relationship come about and what is it about them that you enjoy working with them so much?

Aaren: I traded a Molder demo to Jason from Rotted Life Records for Coffin Rot’s first demo that he released. It was absolutely killer so I tracked them down online and started asking them about doing a split. Dominic established a killer relationship with them via tape trading as well, as you can see we all like tapes haha. Anyways we did the split and flew out to Oregon for a few shows with them. What a killer mini-tour, they really showed us a good time. So much so we had them come out to Chicago for a Midwest run. They’re great fucking dudes. That’s my story and I’m sticking to it!

Aaren, you jumped in with Skeletal Remains back at the show in November when Chris (Monroy) had to bow out and did a great job filling in on vocals. How was it doing that and how much time did you have to get ready for that?

Aaren: That was super fucking wild! Chris had a family emergency a couple days before the Chicago date we had booked with them and Obscene, so he hit me up and asked if I’d be open to filling in on vocals. So I had like two-three days to get the lyrics down. I ended up splitting the set with Nick, their merch dude from Insineratehymn. Was an honor to step in and help out my friends!

The midwest has a pretty strong scene for death metal right now. What do you think it is about this region of the country that is producing such quality releases of extreme metal? What has the Chicago area scene been like for you guys?

Aaren: Chicago kind of sucks, great fucking bands here but over all our “scene” is rather lack-luster. Most of the “good” bands aren’t very active and it definitely puts a damper on things, but so be it. We’ve been fortunate to open for several tour packages and that always kills, but the local circuit not so much honestly. The midwest is just an absolute melting pot of different shit, especially death metal. What makes it so killer or unique, is the fact that there is no definitive sound here… Everybody is just doing their own take on things and it’s really rad.

You guys recently signed to Prosthetic Records, who have a really impressive stable of extreme metal bands. What has their support meant to you and what does it mean for the band as a whole?

Aaren: It’s pretty damn neat. Never thought in a million years our band would be approached by a “major” for a record deal. So that was definitely very gratifying. Hopefully that means some more exposure, bigger shows, more merch etc. Of course time will tell!

Lastly, what’s next for Molder and what are your goals for the next few years? I think you said something at the Skeletal Remains show back in November about a new album this year. How’s work on that going and when can we expect that? I’m definitely not alone in saying that I can’t wait to hear it!
Aaren: Can’t speak TOO much on the new record… but you can expect it SOON. Hoping to just keep writing new shit that doesn’t suck, and play some killer shows with our friends. Keep your eyes peeled, more shit to come! Cheers!