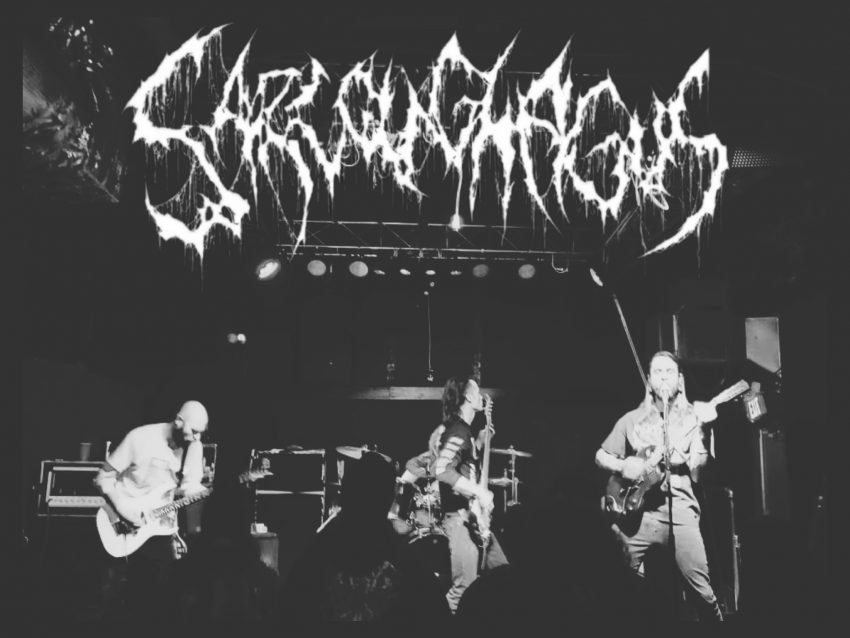 Does anything good ever come from opening the sarcophagus? In the best case scenario, you disturb the rest of some ancient Egyptians and have to deal with the putrescence of centuries-old corpse stink. That’s the best case scenario. In the worst case, well, we’ve all heard the Mercyful Fate song. As far as I know, no one really wants to deal with a pharaoh’s curse.Thankfully, we don’t live in a Boris Karloff movie and it’s more than safe to open anything and everything presented to you by Cleveland-based extreme metallers Sarcoughagus.

The band, which put out its debut LP Delusions of the Sick last year, has been steadily making a name for itself in the midwest death metal scene thanks to the strength of that debut as well as series of demos from 2020. I recently caught up with guitarist/vocalist Nate Fey to discuss the rise of Sarcoughagus.

First off, how did Sarcophagus get started? How did you guys meet and what made you all want to form a metal band with each other?

Nate: Well at first it was just me writing riffs in my basement, my idea was to just to start writing songs. I had spent years playing guitar but never really took it seriously. I posted a snippet of a song I was working on and my buddy Nick (Camiola, ex-drummer) saw it and loved it so much he wanted to start writing with me. Eventually we got a few songs written and found a bassist (Ryan Weseling) who was friends with Nick and we were set to record, which ended up being Invoking Paranoia and the first four songs I had ever written on guitar. At one point we had a second guitarist (Grant) but eventually quit on good terms and PJ (McGillick) took the spot, which turned out really well for us because he’s just a great guitarist and is capable of all the noodley solo stuff I just can’t do (laughs).

What got you into metal in the first place and who are some of your big influences?

Nate: Well I grew up around musicians and music, and believe it or not, played drums in church growing up (laughs). But eventually I developed a love for bands like Metallica and Slayer and then went through a whole deathcore phase and the past 10 years or so I’ve been pretty dead set on death metal/thrash metal and the like. Biggest influences now is a list of bands but my top three would probably be Death/Master/Deicide

Nate: Well we’ve had a few member changes over time and that’s definitely impacted us in a number of ways, different drummer now (Ray Conde) plays a bit different and to hear Nick on the album vs Ray playing the songs live, there’s definitely slight differences in a good way, I’d say. Ryan has always helped a lot with coming up with catchy riffs; he actually wrote the main riff for “Exsanguination” and “Force Fed.” And then the addition of PJ has been awesome, he’s definitely pushing me to play harder riffs and faster tempos. Just watching him solo makes me smile ear to ear (laughs). (I) can’t wait to show everyone some of the new stuff he’s written, definitely been a challenge to learn his songs and do vocals on top of it but it’s a challenge I’m here for.

Nate: No, I don’t really have any specific methods. A lot of my lyrics are just based on mental struggles of my own sorta personified and exaggerated to make a cool song, but I do have some fun ones like “Cannibalistic Search Party.” It’s actually completely written about a Criminal Minds episode and I love it (laughs). But then I got songs like “Primal Being” that I quite literally wrote the lyrics a half hour before I recorded them. Definitely working on an overall theme for the new songs we have and future material vs individual themes for each song.

Judging by those lyrics, I’m assuming your a big horror guy. What appeals to you about the genre and what are some of your favorites (books, movies, games, etc.)?

Nate: Ohhhhh yeah, I love all kinds of horror movies and whatnot. I gotta say Hellraiser is hands-down my favorite of all time, anyone that knows me knows I love Hellraiser. I (have) even got a giant Hellraiser puzzle box carpet in my band room (laughs). I find myself always putting on the older horror movies vs newer. I don’t know if it’s just the nostalgia or if I just don’t really LOVE newer horror movies. (I) always loved the old comics and whatnot, had a ton of those growing up, lots of cool Batman comics and just anything with gore or fighting (laughs). Other than that, I just love skateboarding, been big into skateboarding since I was a kid.

You guys have had a consistent lineup so far. What makes you all work so well together?

Nate: Well I think we’re all pretty laid back and smoke too much to care anyways (laughs). But our current lineup is solid, lots of commitment, motivation. We’re all in other bands or have had quite a bit of experience with writing music in full band settings and we don’t take it too serious. We get together every week because we love hanging out and have fun playing music. Even if this band never existed I would make time to hang out with these dudes.

What was the writing/recording process like for your debut? Were there any challenges to getting your first LP done?

Nate: Well it was super smooth for the most part. We got in a groove of writing there for a while, every week someone would have a sick ass riff to build a song off of and it wasn’t long before Scott shot me a message about him putting out our next release we were working on, which helped a lot cause we got to record with who we wanted, when we wanted. I struggle with lyrics more than anything so I always feel like I’m rushing myself to get it done so we can play a new song. And, like I mentioned, while the guys were downstairs recording their parts with Cody Davison, I was upstairs on the front porch with a notebook writing lyrics to a phone recording of our practice from the day before (laughs).

What did you learn from the recording process that you’ll take to future recordings? Do you feel more comfortable with writing/recording an album now that you’ve got one done?

Nate: Oh yeah, I’d say no matter what you’re doing, experience is always gonna speak volumes in your future work. I can definitely tell we’re spending a bit more time on this next release, pushing ourselves a little harder. Ray is on drums now so that’s gonna be a cool difference. I’ve spent some time recording and mixing music for myself and other bands and knowing the process helps me a lot. (It) makes it easier to picture an album as a whole vs just writing as many individual songs as we can before recording day.

How do you feel about the final product for that album? I know fans have been digging it so that must feel super nice!

Nate: It’s something I’ll cherish for the rest of my life. I’ve been playing music for most of my life now and I can’t say I’ve ever been more proud of something I had part in writing. Couldn’t thank Scott from Maggot Stomp enough for not only putting out the release but (they) paid for everything and just wanted to help us make something badass. Working with him has been nothing but great.

Who did the cover for that one and how much direction did you give them? It’s a really cool piece of art that makes me think of a Lovecraftian landscape.

Nate: Mark Cooper did the cover art and we didn’t have any influence on the artwork itself. We actually picked that painting out of a handful of paintings that Scott had shown me when I had described what type of artwork we were interested in. I saw that and my first thought was “Fuck, that’s a giant intergalactic space weed nug… THAT’S the ONE!”

How much was the band affected by the pandemic, either in terms of playing live, recording, or releasing music?

Nate: I mean, for the most part, shows slowed down entirely but we kept practicing almost weekly anyways. Everyone got vaccinated in case we DID get a show, so we did play a good handful of shows regardless.

What’s your local scene like in Cleveland and how has it helped to shape the band? Who are some other bands that our readers should check out if they dig your sound?

Nate: Ahh man the local scene around here rules, lots of cool people, lots of cool bands, all kinds of genres too. Akron/Canton area ain’t bad either, just about any corner of Ohio has some kinda music scene going on. That’s how I even met the guys in the band, all just friends of friends in the music scene who were looking to start another project with someone. I just happened to need a whole band (laughs). But anyone that knows OHDM knows there’s a small list of kick ass bands out right now

Lastly, what’s next for Sarcoughagus? What are your goals for the next few years?

Nate: Well right now the focus is just slowly chipping away at this next release, no real set plans on how many songs or timeframe yet and we wanna keep it that way. Besides that, just kinda taking the show on the road for now. We got a few shows booked here and there and some small out of state runs that should be fun but definitely focused on writing for now.