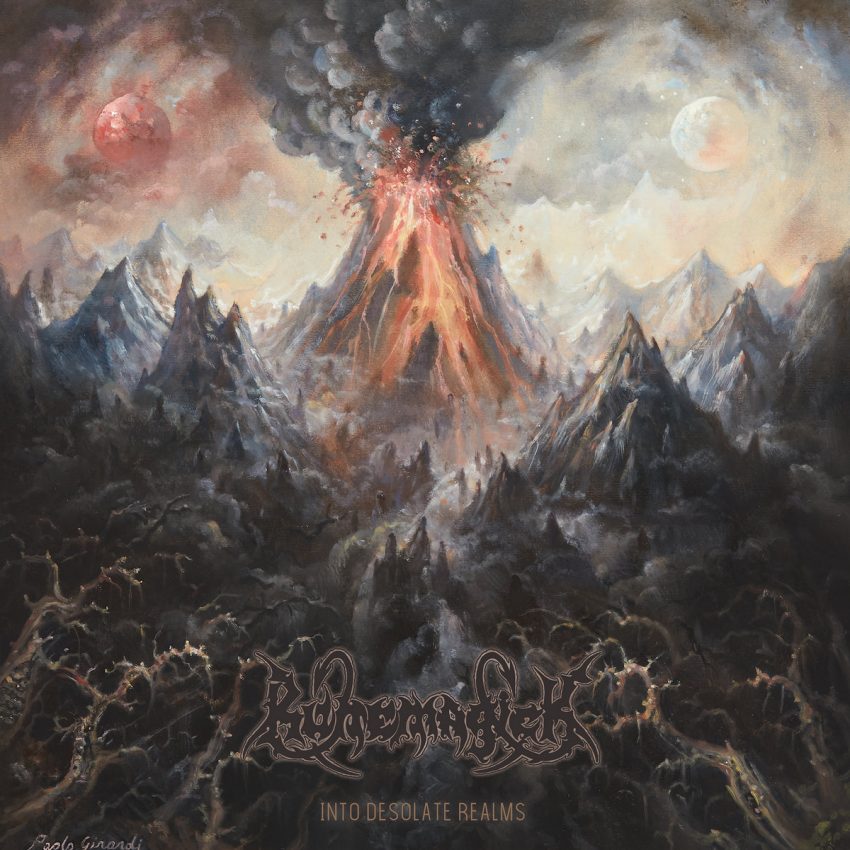 Resurrection is not a rare event in the world of metal. Since the dawn of the new(ish) millennium, plenty of bands have come and gone and come back again. Everyone from Carcass to the Tygers of Pan Tang have reformed and put out killer records since their triumphant returns. Bands long thought dead and gone have been crawling their way out of their respective graves to show new generations of metalheads that sometimes dead isn’t always better. In 2017, Sweden’s Runemagick awoke from a decade-long hibernation to come roaring back to life and doesn’t show any sign of slowing down now.

Formed in 1990 in Sweden, Runemagick has been at the forefront of the death-doom genre for more than three decades now. A few hiatuses (included the aforementioned 2007-2017 slumber) did nothing to stop the Swedish death purveyors whose fans can feel confident that the band, much like a slasher in an 80s movie, always comes back for more. The 2018 release Evoked from Abysmal Sleep and 2019’s Into Desolate Realms showed that this return was anything but a festival-playing cash grab. I recently caught up with vocalist/guitarist and founding member Nicklas “Terror” Rudolfsson to talk about the resurgent Runemagick.

First off, what is the origin of Runemagick? How did the band get started and what, initially, did the band want to do from a musical standpoint?

Nicklas: The band was started as a side project in the early ’90s. I started it and did the first simple demo recordings myself. But fairly early on, Robert Pehrsson also joined the band. In the early days there was a lot of influence from Bathory, Hellhammer/[Celtic Frost], and other bands.

What got you guys into metal in the first place and who are some of the bands that got you into the genre?

Nicklas: For my own part, I have always been interested in music and this also applies to large parts of my family and relatives. My uncle was into hard rock and got into metal early on, so I think that’s where I got into harder music. Then I had several friends who had older siblings who listened to early Iron Maiden and other things in the early ’80s that we quickly picked up and started to like.

As for the more extreme metal, there were bands like early Slayer, Hellhammer, Celtic Frost, Candlemass, Bathory, and so on. Then they slipped into the underground with tape trading and all the demo bands.

You guys have a really awesome death/doom sound that does justice to both subgenres while melding them into one unique package that fans of both can dig. How did you guys develop your sound? Is this specifically what you set out to play when you guys got together or did it change and evolve into what it’s become as time went on?

Nicklas: If you look at the entire timeline of the band, the music has evolved and partly changed. In the beginning, we groped our way more to find our own style. Then member changes also affect the style and the sound, of course. But I almost see it as three eras. First, which was the early years. Then, an era with the first three-four albums (then we still played a lot of old material). I think the current era started with the album Darkness Death Doom about 20 years ago. It was around that time I felt that now we are starting to find an “own” style and sound for the band. The riffs and arrangements started to get a little heavier, mixed with mid-tempo death. And then since then, we have had a reasonably stable core lineup. I see us still being in that era even though we had a longer break during that time as well.

Nicklas: Yes, in the old days we rehearsed a lot more. During the last active years, there were only a few rehearsals a year, like maybe one before a show or so. And nowadays there are no rehearsals with the whole band at all.

What’s the writing process like for the lyrics side of things? What do you try to do with the words to a Runemagick song and is there anything that you turn to in particular for inspiration?

Nicklas: Usually the music is written first and the lyrics later. Sometimes there are exceptions to that but usually the process is like that. Then, of course, there can be adjustments after the lyrics are ready in terms of arrangement so it fits better.

As far as lyrics are concerned, there is no directly planned message or anything like that. The lyrics are free to be interpreted by those who listen and read. It’s not something that I put myself into or care much about. Of course, there is a lot of “death and doom” as lyrical themes, as it should be in this kind of music in my opinion. But, of course, you can use such subjects in the metaphorical direction as well.

I’m always interested in how bands got the opportunity to record their first album and what that process was like. How did getting to make The Supreme Force of Eternity come about and how much of a learning experience was the process of writing/recording that one? What did you learn making that album that you took to future recordings?

Nicklas: In short, I’m not happy with that album at all. It would never have been recorded. The main reason for that is that they are mostly very old songs and in many cases the tempo was way too fast (you can hear it if you listen to old demo versions). As for the sound and the actual recording in Studio Fredman, I have no complaints about it. In my opinion Enter The Realm Of Death should be the debut album. However, I have no one to blame but myself for this. I could have affected this more than I did.
What I learned is not to rush decisions. Although that mistake happened many times after that [laughs].

The current lineup has been together, off and on, for a decent chunk of years. What makes this group work so well together and how do you guys maintain a healthy band dynamic?

Nicklas: I think personal chemistry is the key to this, but as said before, these days we don’t rehearse at all but it depends more on health reasons.

Between the first album and the hiatus, the band put out 10 albums in about 10 years. What was fueling that creative fire and how did you manage to make so many albums that all feel unique in such a short time? It’s an impressive feat to accomplish to get that many records down and have them all feel unique and worthwhile.

Nicklas: Inspiration, a creative flow, lust and dedicated mindset for the music and scene.

What led to the hiatus from 2007-2017 and what led to the band getting back together? How did you know that it was time to bring Runemagick back at that time?

Nicklas: In essence and in short, I can probably say that it is the lack of what I answered in the previous question.

As for the resurrection in 2017, I have to primarily “blame” Daniel (Kill-Town Deathfest) for that. He has been asking us for years to play at his festival. But when he pushed again we started talking about playing live and I had actually started writing some Runemagickish riffs during that time so the pieces started to fall into place to get going again.

What was recording that first album back, Evoked from Abysmal Sleep, like? Was there any rust to getting the writing/recording done or did you guys fall back into old habits and it felt more natural again?

Nicklas: Very, very rusty. I think you can hear that in terms of writing, composing, and performing. So if you compare that album to the next one Into Desolate Realms there is a big difference. At least in my opinion.

Nicklas: Some gigs were postponed and canceled like for everyone else. Otherwise, I wrote music as usual, not just for Runemagick.

Having been in the world of metal for decades, what do you feel the current state of the genre is? Do you feel like metal is in a stronger or weaker place than it was when you guys were starting out and why?

Nicklas: The genre as a whole is much bigger and broader now than it was 20-35 years ago. The possibilities of spreading music have changed a lot and also in terms of the possibility of playing live. Then you can probably get a little nostalgic sometimes and miss the old times that had its magic, but it’s probably always like that I guess.

It feels like there are more bands than ever thanks to the ease of home recording and self-distribution methods like Bandcamp but that can also be a bit of a double edged sword when it comes to bands getting people to pay attention to them over all the other ones out there. What advice do you have to younger bands starting out about making something that connects with the fans and that lasts?

Nicklas: I’m really not an extrovert or a person who likes to be seen. I’ve also never had any goal of becoming rich or famous in music, so maybe I’m not the right person to ask. But to answer, in my opinion, the most important thing is to be dedicated, let the creative flow guide, and just keep going. Don’t think too much about what others think. But that’s what I think.

Being that Runemagick has been going since the 90s, what keeps bringing you back to making this style of music and this band? What is it about Runemagick that has made you want to dedicate a large portion of your adult life to the band?

Nicklas: Probably what I mentioned earlier. The lust and the creative flow. I am involved in several other bands and projects now and then. So somehow I am always active in the creation of music more or less. My life would be very boring without creativity and music.

Lastly, what’s next for Runemagick? What are your goals for the future of the band?

Nicklas: Our latest and upcoming album Beyond the Cenotaph of Mankind was recorded in 2021-2022 and will be released on Hammerheart Records in 2023. It sounds Runemagick and I hope everyone who likes our music will also like that album. Then we currently don’t have much more planned than that. We’ll see where this time and life takes us.