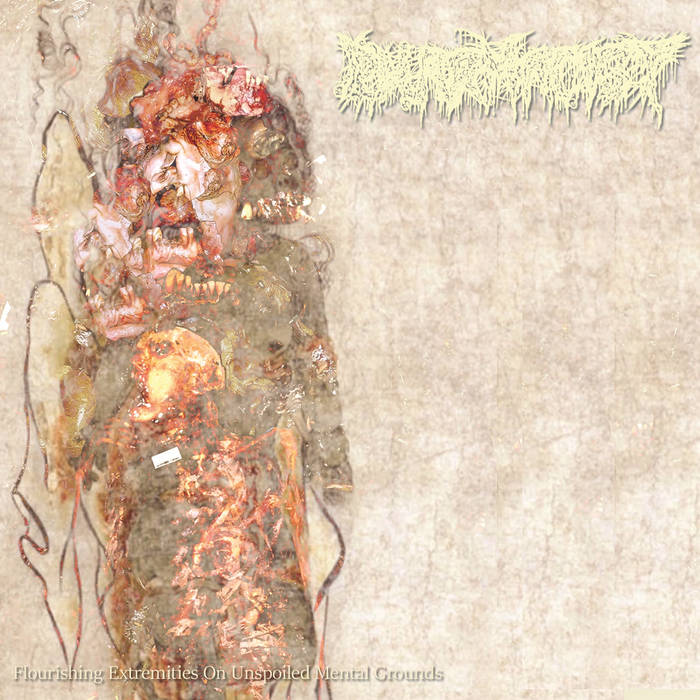 A pharmacist, by definition, dispenses medicines that, in theory, are meant to make you feel better. If something is wrong inside you, something that needs medical attention, you’re going to need a pharmacist somewhere along the line to give you some form of medicinal help. But what about those of us who have more of a mental malady that needs treating, particularly those of us who need a lethal dose of something a little more intense than your local pharmacological expert can give? For those of us who take our harsh medicine aurally, Pharmacist has us covered.

Since forming in 2020, the band has put out a variety of splits, two EPs, and two LPs, including this year’s excellent Flourishing Extremities on Unspoiled Mental Grounds. It has been, to say the least, a busy two years for the Japanese-based band. With a variety of original material already behind them, Pharmacist doesn’t have plans to slow down any time soon. I recently caught up with vocalist/bassist/guitarist Kyrylo Stefanskyi, who shares a stage name with the band, about what makes Pharmacist work so damn well.

First off, how did Pharmacist get started? How did you guys meet and what made you want to form this type of band?

Pharmacist: Pharmacist band name idea started some time before the actual material preparation, at that time I already had [a] logo but still was not sure which direction I would take it over. But in 2020, before [the] pandemic started, I decided to work on some heavily death-metal lifted grind project, inspired by Pathologist and Carcass. Nowadays, whatever has corpses on the cover and high/low vocals [is] considered as “nice-Carcass-vibe-brah,” but I wanted to focus on the more bizarre riffing, which had this murky atmosphere on Pathologist and Carcass material. So for that I wanted to have much more freedom in riff selection, and once that clicked, material work started. After all most things came naturally, turning out each aspect the opposite way of whatever current cliches.

What got you into extreme metal in the first place and who are some of your big inspirations?

Pharmacist: I started from Metallica and thrash in general, slowly turning somewhere into death metal and later with grindcore. I remember only discovering tons of bands on Braindead zine back in the day. There was [an] encyclopedia page with each band’s discographies, and sample mp3 downloads, which introduced many classics. I wrote them to my notebook separately and searched in pirate stores for self-dabbed pirate copies. Inspiration is always changing, sometimes [I] get back to more classic stuff. My latest inspiration is Coroner’s catalogue, especially Mental Vortex and No More Color. Still sounds brilliant as the first time.

Pharmacist: It fits the intensity of music and, surprisingly, I think has a good range of themes – it can be murders or serial killer stuff, slaughter / violence in pure form, medical / pathological themes, forensic investigations, surgeries, etc.

What is the writing process like for the music and has that changed at all as the years have gone on?

Pharmacist: More changes are coming on relying [on] studio experiences – things I’ve learnt from previous records, I can use them as tools, keeping them in mind when creating something new. Also cutting the fat, time consuming things which can be shortened, or skipped. But basics can be changed from song to song, sometimes on purpose, depending how you wish to weave it into [an] album’s whole flow. But usually it is writing riffs, separately or in small clusters, and then combining them into songs, recording a demo and brushing it up, then going to [the] studio for recording and later having bass, adding vocal ideas/lyrics.

What is the writing process like for the lyrics aspect of the band? Who writes those and what do you/they use for inspiration? What do you try to do with the lyrics for a Pharmacist song?

Pharmacist: I write all [of] what is on the record, but lyrics are just something for vocals to be in there, especially for the first album. I really want people to listen to the music instead of anything else, and vocals are just a small and very limited, to be honest, instrumental addition. Usually all vocal parts and lyrics come after the musical part is done, while I listen to it for mixing and see where people will talk if I skip the vocals. So I only put it in those places [laughs]. For lyric content, the second album has more themes about musical corruption, greed, prejudice, and the artistic vision on the other side of scales.

How did recording the debut come about? What did you learn from the process that you improved on over the following releases? How exciting was it to finally have a full-length release done?

Pharmacist: For the debut recording, I remember saying to [the] engineer [that] I need the sound as it is played and recorded in a garage with steel walls [laughs]. I wanted to make some dirty and crispy sound, so in this meaning, compared to the latest release to date (Crash Syndrom split with FesterDecay), it was a step back in the 90s. It was a great and fun time to make it, even though it took quite a good chunk of time to align it with the target shape. The first excitement came when I got artwork from Adam (Strange Creature Collages), and it gave a clear vision of the end result.

With a couple albums out, is it harder or easier to make records these days? I assume you probably feel pretty comfortable recording at this point but it can always be a challenge to not repeat yourself with the more albums you put out. I think all of your albums are incredibly varied and unique, how do you make sure you’re not doing the same thing over and over?

Pharmacist: Actually the more doing, the longer it takes. During the process there are always more new things you learn, horizon expanded, so instead of sticking to the same conveyor [belt] production you try to apply all previous experience to the new album, which contains more and more nuances each time. For the variations, it is more natural things. Each month and year, the emotional message you want to deliver will be different, so in this meaning you are trying something new and unknown yet discovering things during the process, so there is no comfort zone [laughs]. But with time you get used to it, there’s always uncertainty and worries on how it will come up. Also for Pharmacist, partially on purpose, I try to avoid making the same approach, and keeping each release a bit different. Of course I can reuse [the] same settings in the studio, and apply [the] same formula for each release, but I feel it is not okay to ask money from people who bought exactly [the] same thing years ago already. Besides, it really is not fun. Before people fall asleep listening to the same songs, I will fall asleep while recording it. I think trying to do something new is of course a risk of critics and negative feedback, so some people tend to stay in the safe zone and avoid bold decisions. It just depends on what bands want and pursue.

What was the recording process like for the most recent record? Was the creation of that at all affected by the COVID pandemic? How happy were you with the final product and what should fans expect? I really dig the record, by the way!

Pharmacist: The process itself was the same, in general. Structured the song from riffs, recorded it, and then thought on vocals and recorded them a few months later. The difference is having guests this time – absolutely amazing guitar solos by Andrew Lee and guest vocals by A.S. Really appreciate their input. It gives the album a unique atmosphere and adds more interesting ideas. COVID did not impact the process at all, at those times in Japan most of the restrictions were softened. But still, partially, some files transfer and communication with the studio was online since I often cannot get enough free time. People can expect death metal with grinding parts, with tons and tons of solos and instrumental parts, some progressive parts inspired by King Crimson and so on, some melodic parts and warm, murky sound. Some parts might remind you of Chris Poland, some – of mid era Death and/or Carcass.

From that first recording to the most recent one, how do you feel the band has grown and evolved?

Pharmacist: It’s hard to tell since evolving can be a curse for some listeners [laughs]. About changes – definitely more Death influence and more old prog rock vibes, less cliches and much more patience for long ass-hours in the studio. In general, better sound quality and storytelling songwriting. I think in the span between both full-lengths, the band covered many genre approaches, from more simple grind to murky death metal, so it also helped to gather all small parts from each split/EP/single release approach and apply them if needed.

How exciting is it for you to have live shows back? Have you gotten to play live yet and what was it like finally getting back in front of a crowd?

Pharmacist: Pharmacist has no gigs to date, and no plans in the future. I think the current band situation is the key of why things are turning out the way they are, and I’d like to keep this balance. Of course playing those songs live would be awesome, but I still like to focus on studio work and spend my very limited free time exactly for that, as for now.

Japan has been putting out great extreme metal bands for years now. What makes the area such a fertile breeding ground for extreme bands and what effect has your local scene had on the band?

Pharmacist: I cannot judge this from a social point of view, but I surely know there are some important key persons. With their hard work and often time/money sacrifice, gigs and events are scheduled, bands are invited, connected with labels and releases are running. So for new upcoming bands, with their (both band and label) hard work, they will have a good chance to work with an honest experienced label, who will also help to schedule tours to support release and spread good work. It does matter a lot, for each single band and for the scene in general.

Lastly, what’s next for Pharmacist? What are you goals for the future of the band?

Pharmacist: I just finished two of three full-lengths beside Pharmacist, so once I finish [the] last, I will start working on new album material. I have no idea how long it will take, maybe a few weeks of a year. But work will be started and I do hope to release it next year. I already have some ideas in general how it would look like, and so excited to start the whole process again, liar [laughs]! For the long term shot, it is even more hard to say anything, but definitely focus on full-length albums and maybe some re-issues of old material.