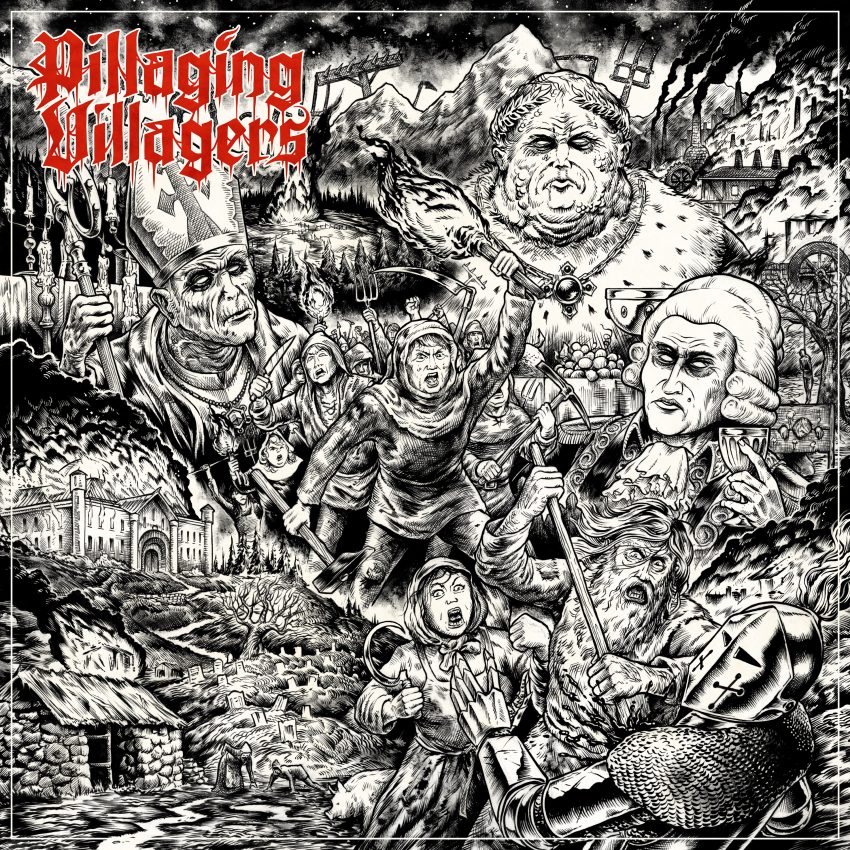 You ever hear a record that tries to mash up a couple of styles and it falls completely flat, feeling like a jack of all trades, master of none? It’s hard to combine different elements of clearly defined genres of music into something that feels cohesive and that actually works for fans of those genres. While we are at it, how many concept albums sound promising in theory and then by the end you realize they’re just a semi-related collection of songs that don’t really tell a story or actually set up a consistent world? On both fronts, there are too many album failures to really count so, when I heard there was an album blending death, thrash, and folk metal with punk elements, and that it was a concept album, you can forgive me for being skeptical. That Pillaging Villagers, the self-titled debut album from mastermind David Frazer, pulls all this off in one of my favorite albums so far this year feels like nothing short of a goddamn miracle.

I already mentioned it but it really does bear repeating that this album deftly pulls off thrash, death, and folk metal with a punk attitude. The opening track, “Wretched of the Earth,” makes that abundantly clear from the get-go. It’s mind-boggling that Frazer was able to meld so many different influences together into one viable package but the album wastes no time demonstrating his skill at combining a variety of his musical influences. Nothing feels awkward or forced here and by the end of the opener, the layered, punky sounding gang vocals on the chorus should have you singing along and thrilled to see what comes next. The folk metal elements are present throughout the album but they really shine through on the opener and “We Remember,” the album’s second track, which helps finish setting up the protagonists and the world of the album. The first time I listened through the record, I pretty quickly realized I was in for a wholly unique affair that has a sound all its own.

Coming off the opening two tracks, we get three straight songs (“The Count,” “The Bishop,” and “The Emperor”) that set up the primary villains of the tale and that use a shift away from the folk elements to hammer home the evil at the heart of the story’s antagonists. Like I said, this is a concept album that actually cares about world building and never loses interest in telling a fully realized and gripping narrative. By the time you’re finished with track five, you really do hate the Count’s blatant disregard for those under him, are terrified of the lengths the Bishop will go to, and cannot wait to hear what will befall the Emperor. Frazer is clearly someone who knows storytelling and displays a much better grasp of what makes a loathsome villain than pretty much any big budget superhero movie released lately.

Following “The Emperor” is the sweeping sixth track, “The Crisis,” which is an eight-and-a-half minute epic that gives listeners the event that sets the villains and heroes on a collision course. I won’t spoil the story but suffice it to say that by the time the song ends, you’ll be ready for some bloodshed. There are clear musical shifts running through the album and a strong three-act structure at play here. The switch in musical tones throughout the album reflects just how much thought went into every aspect of the album to ensure the maximum possible effect of the story Frazer is telling. By the time act two ends and you’ve met the villains and seen what they’ve done to the world of the story, “Voices to the Sky” kicks in with a call to arms to start the third act and gives a stunning callback to the album opener as it reintroduces the folk elements. A glance at titles like “Burn the Monastery,” “Smash the Factory,” and “Freedom is Ours,” will tell you a bit about what to expect from the end of the story but you’ll still be cheering the destruction of the mechanisms that kept our protagonists downtrodden.

The whole experience of Pillaging Villagers is an utter blast from beginning to end and a treat on both a musical and a storytelling level. I’ve had the memorable, driving riffs from the album slamming through my head for days and, with the amount of time I’m still putting in with this album, probably will for some time. With lyrics like “laborers unite, cast off your chains and fight. Defend the working class, we must fight until our last, resist with all your might,” from “Smash the Factory,” as well as the fact that this comes from an unsigned and independent artist who is clearly pouring his heart and soul into his art, it’s hard to see this not becoming a cult classic. I honestly cannot recommend checking this album out enough. It’s going to have to be an uncommonly strong year for releases if I’m not talking about this one by the time December rolls around and I’m looking to compile my end-of-the-year lists.