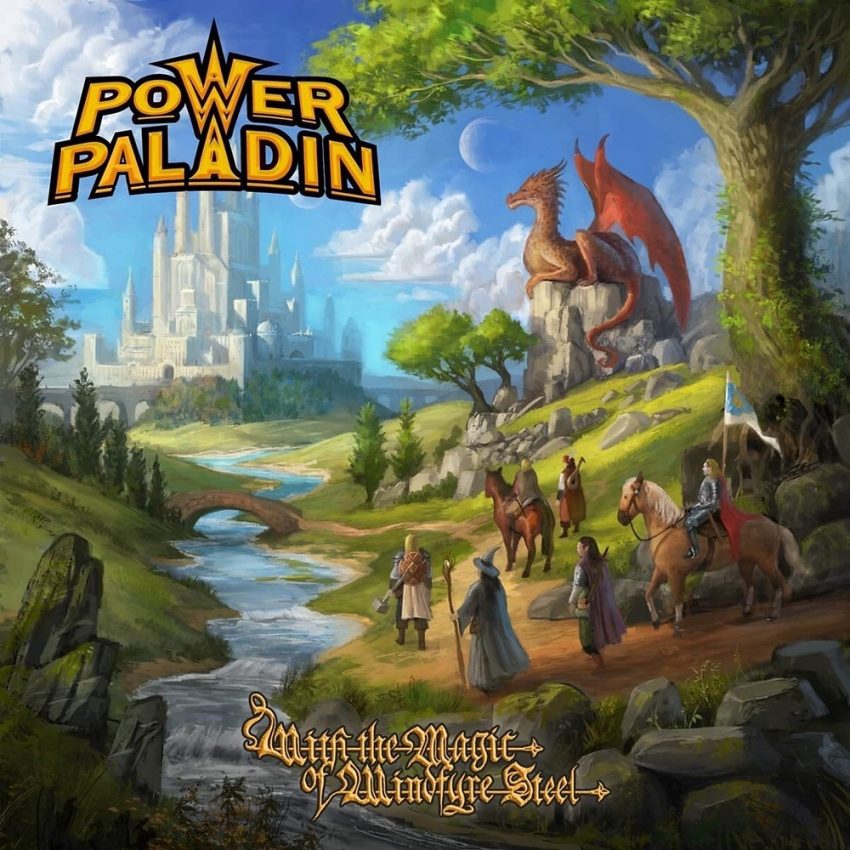 There’s something about experiencing the story of a thrilling quest to get you feeling alive, isn’t there? Knights, dwarves, and elves hit the road with the intent of reclaiming their birthright or vanquishing the malevolent force at the heart of the land or hell, maybe just to seek out copious amounts of treasure. Whatever the endgame is, quests make for some damn thrilling storytelling spread out through a variety of books, movies, and games. If you’re looking for a quest of the musical variety, Power Paladin has got you covered.

Formed in Iceland in 2017, Power Paladin burst onto the international scene earlier this year with their debut LP, With the Magic of Windfyre Steel, which is an upbeat, fantasy-oriented romp through classic heavy metal inspired songs. For fans of ’90s and ’00s power metal records, With the Magic of Windfyre Steel, is a must-have. We talked to the band about the album, their history, and what it is about fantasy that appeals to them.

First off, although you’ve been a band since 2017, your first album is probably most people’s introduction to the group. How did the band come about and what drew you all to each other?

Ingi Þórisson (guitars): Almost all of us have played together before, and mostly we’ve played power metal or glam rock. We have had at least three attempts to create a power metal band but never successfully. This time around the idea was just to try again but something seemed to click and it just worked.

What was it that got you guys into metal in general and what made you want to play power metal specifically?

Ingi: I got really into Pink Floyd when I was like four or five but my brother threw some Metallica my way at one point and then there was no turning back. I didn’t really get into power metal until Krilli (Þorsteinsson), our bassist, showed me some bands back in 2006 or so.

Who came up with the name Paladin originally and why the switch to Power Paladin? I think it’s an awesome name that really connects with what your music is all about. Plus the alliteration just makes it sound cool to say.

Krilli: That name just kind of captures what power metal is all about. Paladins are righteous warriors fighting for justice. The name itself is very uplifting. Plus, (vocalist) Atli (Guðlaugsson) is pure of heart and righteous of spirit and only ever plays paladins in any RPG where that is an option.

As for the “Power” prefix, when we founded the band there were no active metal bands with the name Paladin, so we were just Paladin for the first couple of years. When the album was finished and we were about to release it, we found that in the years since we founded the band, an American metal band called Paladin had already released an album.

To prevent confusion we had to change our name. We decided to keep the Paladin name but add something to it. After throwing around some options – Turbo Paladin was a contender for a while – Power Paladin just had a really nice ring to it.

Who are your musical influences, both within and outside the world of metal?

Ingi: Symphony X’s Michael Romeo was a big influence on me when I was trying to learnt o shred but I think David Gilmour will always own my heart. Outside of the metal world, it’s mainly different renaissance and baroque composers but some of the new hip hop, trap-metal artists are also doing some amazing things. Zheani’s new stuff is brilliant!

Krilli: I think by far our largest influences are power metal from the ’90s and early ’00s. Bands like Rhapsody, Edguy, Hammerfall, Helloween, Gamma Ray, Blind Guardian and so forth.

What is your writing process like for the music aspect? Is there a primary songwriter or is it a collective effort?

Ingi: We mainly start off with writing some basics in Guitar Pro that we use to learn the songs – after that we take them to band practice and try playing them together. This usually leads to some changes and the song is normally finalized in the recording process.

In regards to lyrics, how do you come up with them? I feel like every song is a pretty self-contained story and also just a lot of fun.

Atli: That was the idea, lyrics that sound fun and go heavy into power metal cheese, especially in the first tracks. As we’ve matured as a band I’ve tried to add some consistency and continuity to some of the themes.

Speaking of lyrics, what drew you to fantasy as a genre and what are some of your favorite works within the genre in terms of books/movies/comics/etc.? I feel within the last 10 years or so, with Game of Thrones taking off as a show and an adaptation of Wheel of Time and a new one of Lord of the Rings, that fantasy is finally getting more of the respect that it deserves as a genre. When I was in school, I felt some ostracization for being into it so it’s awesome to see it finally getting more love.

Krilli: I’ve personally been reading a lot of fantasy and science fiction since I was a child.Star Wars and Lord of the Rings were big jumping off points for me, which got me into reading in general.

Power metal has always had a huge fantasy influence, I think. Bands like Rhapsody and Blind Guardian draw hugely from fantasy imagery, and these two really shaped the genre. Some of my favorites are the Stormlight Archives by Brandon Sanderson – We even have a song named after one of his books, “Way of Kings,” although the lyrics aren’t really a direct telling of the story.

While on lyrics, I’d be remiss if I didn’t ask about the opener to the album, “Kraven the Hunter.” Have you always been Spider-Man fans and why Kraven for the focal point of the opener? I’ve always felt like he’s a villain that should have gotten a spot in a movie by now.

Atli: Always been a Spider-Man fan yeah. And the reason for writing a song about him was because we can! And it’s so much fun. The working title for the song was actually “Sting of the Scorpid” but I wanted to keep the lyrics within a medieval fantasy setting and Kraven fit perfectly into that.

On “Kraven the Hunter,” how did that music video come about? The execution is fantastic and it showcases the band’s fantasy inspirations, music, and sense of humor very well.

Ingi: We honestly had like four days to decide what to do in that video – it was all very much last minute – so we just kinda looked at what we had at the place of shooting and found this old arcade machine. The rest was just green screen bullshit that we felt might be funny.

How about the “Creatures of the Night” video? I absolutely love the animation in it. It’s one of my favorite music videos of the last few years. I feel like videos are almost a lost art anymore but you guys have already put out some kickass ones just off one record already!

Ingi: Our label had some contacts with the RMIT University in Melbourne, Australia and the classes there have done some projects for other metal bands like Children of Bodom etc. We basically gave them a very simple idea – us in a spooky town being hunted by werewolves one by one. We asked them not to show us anything until it was ready so we were pretty blown away when it came out. We expected much but this completely blew all those expectations out of the water. Huge props to all the talented team that worked on it, they’re going to go far.

What was the recording process for With the Magic of Windfyre Steel like? Being your first record as a band, were there any hiccups or adjustments to getting your songs down on a recording? What were your expectations for the record?

Ingi: We basically recorded over a very long period of time. Never went to a studio but just did sessions here and there with one final session in a cabin in the country side where we finished most of the vocal parts. In hindsight, we should have done fewer but longer sessions since the recording folder got a bit messy in the end but putting that aside, we are super happy with the outcome. Doing this in a studio would never have been possible (unless we had millions in budget).

You signed to Atomic Fire Records, which already has a strong stable. How did that partnership come about and what has their support meant to you?

Ingi: Their support has meant a lot to us, we’re really new in this business and they have been nothing but helpful and understanding when it comes to this whole thing. A mutual friend of ours and Markus Wosgien, Þorsteinn Kolbeinsson sent our album to Markus after we sent him a small EPK package and to our surprise (we honestly didn’t expect anything from this record) Markus loved it and got in touch with us.

With COVID forcing all kinds of lockdowns and distancing measures, what was the process of writing, recording, and releasing a record during a pandemic like? I know some bands have said it gave them more time to work on material but also deeply hindered their ability to get out and work the material out live.

Ingi: We honestly would probably have taken a lot longer to finish the album if it wasn’t for the lock downs. We had some problems with actually getting out and recording because we kept being asked to play concerts at home. Due to that we tended to postpone all recording sessions in favor of band practices (all of us having full time jobs doesn’t allow for time to do both at the same time). When COVID hit we finally had no excuses left so we kinda just had to get going. And we did! It took us pretty much the summer after COVID to finish recording!

Lastly, what’s next for Power Paladin and where do you hope to take the band following your strong debut?

Ingi: Well, we’re planning some gigs here and there but I think our biggest job going forward will be trying to match this debut with our second album. Hope we didn’t set the bar too high?