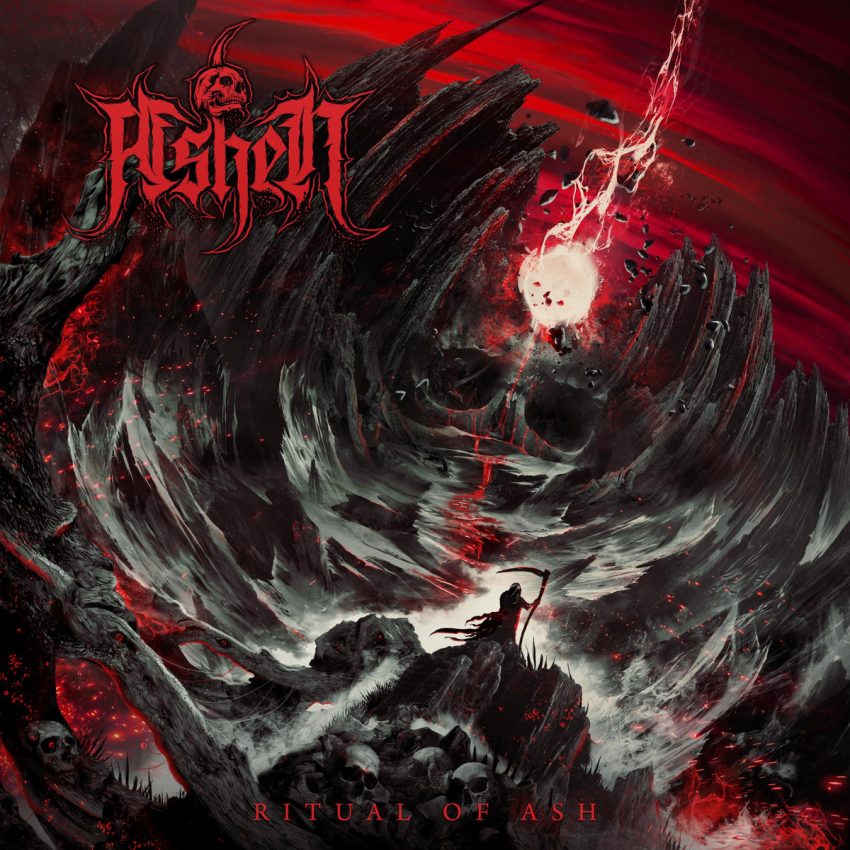 It doesn’t take long into Ritual of Ash, the debut longplayer from Australian death metallers Ashen, to realize that these dudes know what the Hell they are doing. If you’ve listened to enough death metal over the years, Ashen’s influences should be pretty readily apparent upon firing up their first LP. Pretty much any band that you listen to will have some of its inspiration worn on its sleeve and many of them will end up feeling like cheap copies. Ashen, however, takes those influences and melds them together into one cohesive package that is anything but an imitation.

The HM-2 guitar tone that Shannon Over uses is probably going to be the first influence that a lot of people are going to catch right off the bat. That classic Swedeath sound is one that I totally love when done right but it’s one that a lot of bands (like, a lot of bands) utilize and, honestly, it has made a lot of records sort of blend together over the last few years. I haven’t gotten tired of the sound by any means but it’s harder and harder for bands to make something recognizable and memorable using it, mainly just due to the sheer repetition of the sound within modern death metal. Ashen, however, make the most out of it and utilize their pedals to not simply ape Dismember or Entombed but to take what they love about those bands and mix it together with influences across the death metal spectrum, particularly a lot of classic OSDM.

The album really doesn’t waste any time hooking you in with the big chunky riffs on album opener “Ritual.” For those who might have missed the 2021 EP Godless Oath (if you did, seriously fix that ASAP!), this is a pretty apt way to introduce the vocals of Richard Clements. Ashen’s vocalist has a Hell of a strong delivery with a very throaty style that’s still pretty intelligible without sacrificing any of the brutality. The opener also puts on display the impressive production that Ashen was able to achieve on the record, with great depth on the low-end and a fully-fleshed out sound in the midrange that manages to retain a bit of the griminess of underground death metal releases but that gives it enough polish for listeners to not get lost in the density of the compositions.

Taking off from “Ritual,” “Deadsight” patiently builds ferocity throughout and leads into the best stretch of the album, “Harbinger” and “Threshold.” These two slow things down a little bit and bring in hooks of a more melodic nature. Sections that pump the breaks before bursting forth with a vocal blast from Clements are really gonna break some necks in the pit when they get played live. The heavy-as-Hell basslines from Josh Harris in this section really add some doom flair to the proceedings in a way that feels completely natural to the compositions and that adds a nice variety for the listener. Drummer Ben Mazzarol shows his steady hand during these moments as well and proves to be capable behind the kit at whatever speed Ashen wants utilize.

Coming in near the end of the record, “Gravemind” is a death metal classic that sounds like it could have been recorded 1990 with its hooky riffs and it features maybe Clements’ best vocal performance on the record. Penultimate number “Buried in Ice” is one that takes a more melodeath approach with some nods toward industrial metal and provides a bit of a changeup near the end of the album. Brimming with chunky riffing, the tight closer “Inhuman” honestly feels like it would be serviced better toward the middle of the track listing. It’s not a bad song by any means but I can’t help but feel like one of the more monolithic, epic numbers from earlier in the album might have worked as a more memorable ending.

Although the OSDM market is a crowded field, Ashen does more than enough to stand above a lot of other bands making their first few releases within the genre. This isn’t ten Cannibal Corpse knockoff songs rinsed and repeated for a full release but rather a display of the deep love that these dudes have for death metal in all its forms. With how effectively Ritual of Ash showcases just what Ashen can do, it’s honestly easy to see them building off this release in all kinds of different ways and it’s exciting to guess where they’ll take things from here. Whatever Ashen decides to follow this up with, I can’t wait for the next ritual.