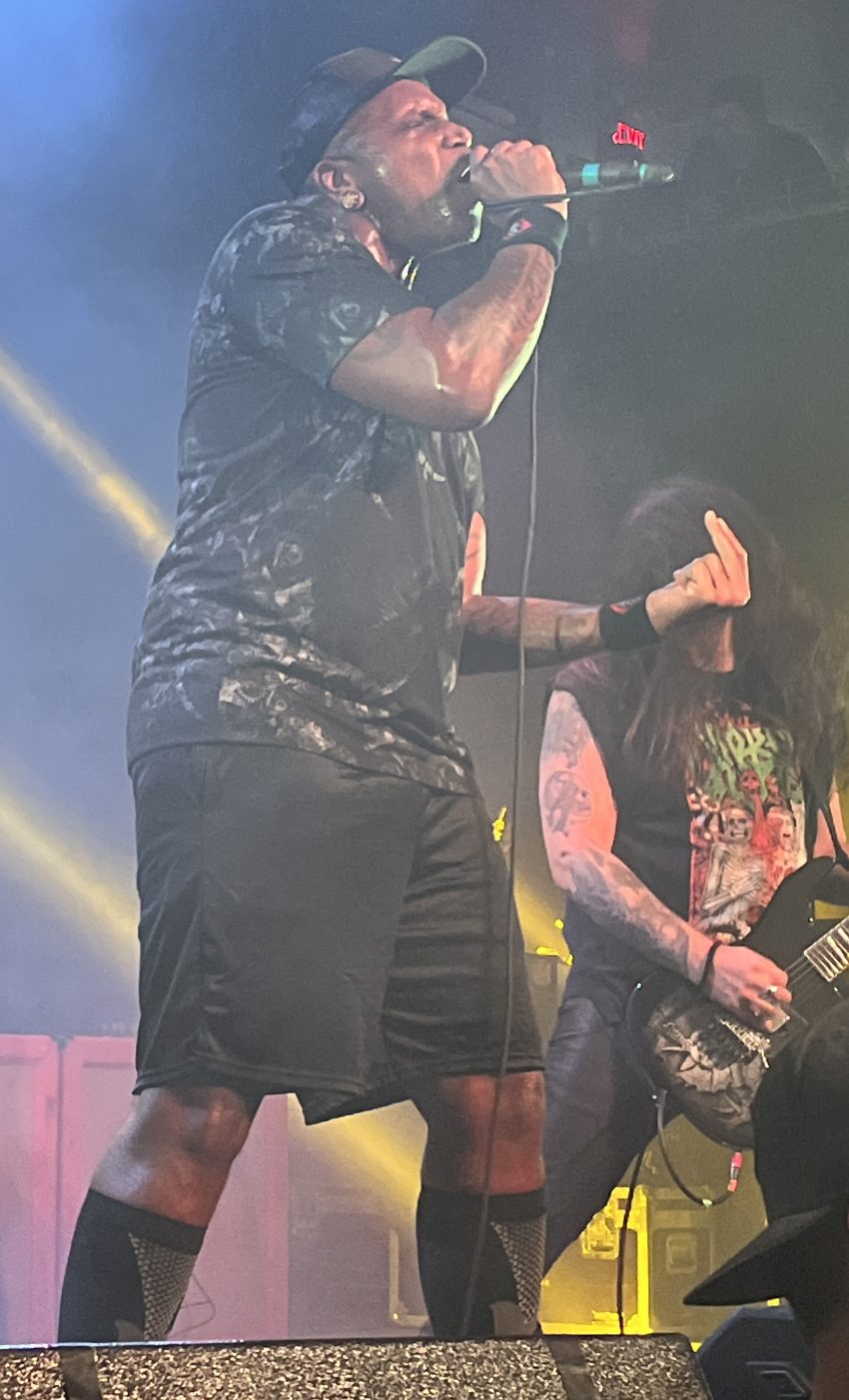 Having never seen Sepultura live before, there was no way I was going to miss a tour with both them and Crowbar, another of my faves. That the legendary Sacred Reich and exciting upstarts Art of Shock were on the bill as well was just adding to an embarrassment of riches for my listening pleasure. The fact that Sepultura was doing a meet-and-greet beforehand for only around $30ish more than the regular ticket price just meant that the months between getting these tickets in October and last night at The Forge in Joliet ticked by with excruciating sluggishness. Thankfully, the show more than met my expectations for such a stacked bill.

Tour openers Art of Shock wasted no time snapping into the thrashing groove when they took the stage to start the night. The band only has one major label release under its belt, 2020’s Dark Angeles, so it seemed like this set was the introduction to the band for most people in the crowd. Frontman Art Geezar and the boys did a nice job of winning the crowd over early on with their excitement and their quick paced thrash tunes. There was a lot of headbanging going on to the band’s short set and the crowd was thoroughly wrapped up in the performance.

You could definitely tell that the band was thrilled to be there and playing live music in front of an audience before some of the most respected names in metal took the stage. That enthusiasm was infectious and the crowd really did give it back to the band throughout the set. Whoever booked these guys to open the tour definitely knew what they were doing.

Crowbar dropped a hell of an album not that long ago in Zero and Below (check out our review here) so I was even more excited to see them on this tour than when I got tickets way back in the fall. I’ve never seen Crowbar live before so I would have been pumped either way, but when a band is supporting an album that is genuinely a superb listen, it makes the night that much more thrilling. I definitely wasn’t the only one pumped to hear some new songs, and “Chemical Godz” and “Bleeding From Every Hole” totally killed live. As a whole, the setlist was a diverse mix that ran the gamut of the band’s career so I can’t see fans of any era feeling left out.

Kirk Windstein is a man who knows how to work a crowd, as attested to by the numerous times he got the crowd whipped up into a fervor and screaming “Crow-bar! Crow-bar! Crow-bar!” Windstein’s trademark rasp sounds as potent live as it does on the albums and the whole band was tremendously locked in. Crowbar’s sludgy, heavier-than-hell songs typically get me on their wavelength pretty deeply on their albums and live was absolutely no exception. It’s decidedly easy to lose yourself in the notes put out by Windstein, lead guitarist Matt Brunson, drummer Tommy Buckley, and bassist Shane Wesley and quickly find yourself at the end of a set that felt like it went by in a flash. I couldn’t be happier that GWAR is taking these guys back out on the road in a few months. It’s going to be a treat to have sonic excess in its purest form opening for our Lords and Masters.

For more than 35 years, Sacred Reich has been an institution in the world of thrash metal. Seeing the band live, they both do and don’t seem like a band that’s been at this for that long. They do in the sense that these guys know what they are doing on a stage. Perpetually smiling frontman Phil Rind is a man who makes being in front of a crowd feel natural and you can tell that his ability to build a connection with his audience was earned over decades of hard work. Wiley Arnett, who has also been with the band since the first record, and drummer Dave McClain, who has been a member off and on since 1995, definitely are in sync with each other playing live and Joey Radziwill, who joined in 2019, feels like he’s been with the group for decades as well.

Where the band doesn’t feel like other nearly 40-year veterans of the scene is in just how excited they are onstage. I mentioned it earlier but Rind really is smiling the whole time. I’m not sure I’ve seen a guy that seems like he’s having a better time by just playing music with his friends for a group of likeminded strangers than Rind. The band’s 11-song set covered a little of everything from each of their five studio albums. Newer songs like “Divide and Conquer” and “Awakening” fired up the crowd just as much as standards like “The American Way” and (of course) “Surf Nicaragua.” The audience was wild as hell during the set too, with people crowd surfing their way toward the band throughout the performance. By the time the set came to an end, I think it was safe to say that most everyone in the crowd was matching Rind’s ear-to-ear grin.

The lights dimmed, smoke started pouring out of the side of the stage, and “Polícia” by Titãs started playing. The audience was more than ready for it when Derrick Green, Paulo Jr., Andreas Kisser, and Eloy Casagrande took the stage and launched into “Isolation” from 2020’s Quadra. The track was the first of seven songs that the group played from Quadra, which was more than fine with me since for my money, it’s the best album from the Green era of the band. Songs like “Guardians of the Earth,” “Capital Enslavement,” and “Means to an End” all more than earned their position in the setlist and there were no complaints heard about the amount of dynamite newer songs taking up the lion’s share of the night.

With a back catalogue as deep as Sepultura’s, the band had plenty of older hits to bang through and songs like “Propaganda” “Territory,” “Infected Voice,” and “Refuse/Resist” all sounded as urgent and powerful as when they were originally recorded. I know that there are still people out there that don’t accept Sepultura past the Max Cavalera era (and at this point they never will), but Green has proven himself time and time again as a worthy successor to Max. At this point, going on 25 years with the band, this is Green’s band from a vocal standpoint. The albums he’s made with the group have been mostly memorable and he’s more than capable of handling the older material live.

Sepultura set out to give their fans their money’s worth with the show and, with their high energy 17-song set, they did just that. Green, who was hampered a little in moving due to a walking cast on his foot, was pouring sweat relatively quickly into the performance but didn’t let up in the least as the night wore on. Kisser’s howling solos brought down the house and his instrumental jam with Paulo Jr. and Casagrande, “The Pentagram,” was a show highlight. If you’re a Sepultura fan (and why the hell wouldn’t you be?), you really couldn’t have asked for a better way to spend a Saturday night.