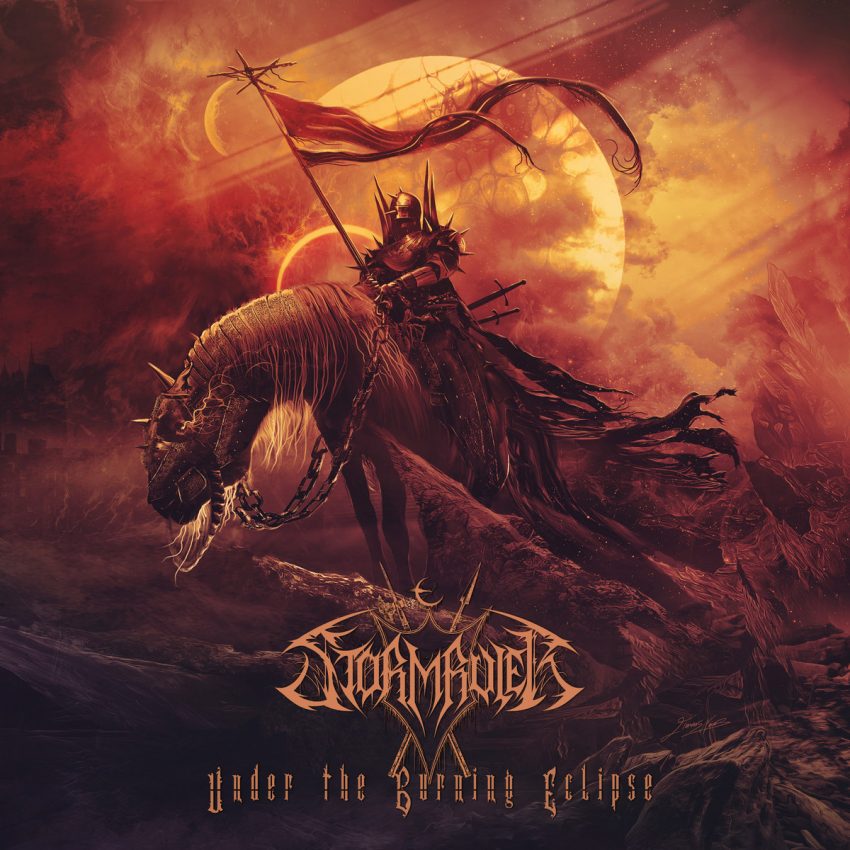 Storms are some of the most destructive forces in all of nature. They have the power to rend the very Earth that they rage over and wreak havoc upon anything and everything unfortunate enough to be within their path. For anyone raised in the Midwest, there’s a special sense of dread that lies in the pit of your stomach when a spring sky turns dark and the winds pick up. Nestled within the joyous rebirth that spring is supposed to bring is the dreaded tornado season, a time when nature itself threatens to take everything you hold dear from you as the atmosphere we take for granted turns unstable. Those howling tornado sirens have a way of cutting to the very core of you when they begin blaring their hellacious music.

To assert dominion over these primal forces of existence is a bold claim, but St. Louis based black metal band Stormruler is anything but timid. For being formed only three years ago, Stormruler has made its mark very quickly by knocking out a banger of a debut (2021’s Under the Burning Eclipse), getting signed to Napalm Records, and securing a spot opening for industry legends Rotting Christ and Borknagar on the 2022 version of the Devastation on the Nation tour. I recently talked to drummer Jesse Schobel and vocalist/guitarist Jason Asberry about their debut, the upcoming tour, and creating a force to be reckoned with in the world of black metal.

How did the band come about and what made you two want to work with each other on this specific project?

Jesse: We had been playing in different bands around the St. Louis area for a while and ran into each other a few times, and while hanging out one time it occurred to us to make our own black metal album. We truly weren’t trying to start a new band or anything, just wanted to make an album. We had the same kind of vision of how we wanted the music to be, and everything came together quite well. Lightning in a bottle I guess!

What initially got you guys into black metal and who are your influences, both inside and outside the genre?

Jason: Me personally, I remember hearing Dimmu Borgir and Zyklon for the first time when I was about 11 or 12. It was the first time I had ever heard anything that sonically musical at such breakneck tempos and I fell in love with it. As for STORMRULER as a whole though Jesse and I share a lot of very similar interests within the genre and I think that’s why we meshed so well. If it weren’t for bands like DAWN, Allegiance, Windir, Marduk, Emperor, Dissection, Summoning, Diabolical Masquerade and countless others, we simply would just not exist.

What is the writing process like for both the music and the lyrics? How would you guys describe the Stormruler sound? I feel like you pretty adeptly mix the atmospheric, cinematic side of black metal with the fast temp, high beats per minute side and it creates a lot of solid variations within your work.

Jesse: A Stormruler song usually comes about with an idea for the general vibe/rhythmic design of the song (like a black ‘n roll pounder, a classical lead fest or a buzzsaw attack), or maybe the initial riff series will set the pace for the rest of the song’s development. Usually Jason pulls from the legion of riffs at his command, and sometimes I donate a few from my riff bank. Then we’ll get together and jam/record it, ponder ideas or directions it could take, and then often will let the song marinate a bit and see what works and what doesn’t after a bit of time. Lyrically, we just try to write about warfare or tales of ritual, sorcery, and the odd bit of non-fiction/history. Books we’ve read and games we have played also have a role in the lyrics.

With the band being the two of you, does that present any unique challenges or have any specific benefits as opposed to a more traditional setup?

Jason: I think we can both agree on, from past experiences, too many cooks in one kitchen can be a bit… detrimental to the overall offering. Having just the two of us behind the wheel really allows for the creativity to flow without too much interference or too many people adamant on having their input and being upset if their ideas are shot down haha… harsh but true.

Let’s talk about your debut, Under the Burning Eclipse. What was the writing/recording process like for that? It’s a very defined and confident debut that has really impressive production. Where did you record and how were you able to achieve the sound on that one?

Jesse: For the recording of UTBE, I actually recorded the drums, bass, and vocals in my basement. I have a decent home studio rig that allows me to do some tracking at my house for smaller scale recordings and demo sessions for all the bands and projects that I’m involved with. For anything important I just send the files to whomever is mixing them. In this case it was our friend Dreathus Harris, who Jason and I have jammed with in his band Xaemora. Jason also recorded the guitars at Dreathus’ studio. The bass recording was noteworthy in that it was played by my good friend Derek Engemann. He and I play together in a few bands including Cast The Stone, which we formed in college. Derek was in town and we did the bass for the album in two sessions of like 8+ hours each, basically learning as he went. It was a lot of fun and quite a creative period.

The cover to that album is a hell of a beast! What was the thought process behind the design and who came up with it?

Jason: The album art is incredible if I do say so myself and it was done by a good friend of ours, Giannis Nakos of Remedy Art Design. Dude is an absolute monster. We basically just told him we wanted it to represent the feeling of the music overall; war-like, destructive, fantastical. Basically just said I wanted a dude on a horse bearing a banner somewhere and the rest was all him!

The video for “Reign of the Winged Duke” is a really cool cinematic experience with a lot of production value. How did that video come about and what was the process of creating it like?

Jesse: We knew we wanted to have some cool armor and wave some swords around, as well as keep a kind of atmosphere similar to that experienced in the game Dark Souls, which the song is about. We filmed it with a videographer in town named JT Ibanez. He had a really cool setup in a big warehouse kind of space and was able to get some good looking backgrounds and scenery for the shoot. Then, it was basically just a matter of playing the song a BUNCH of times and “trying to look cool”! We used a bishop throne that had been in my family for a few generations as well for a few shots.

The black metal scene in the United States has been incredibly strong in the last decade and doesn’t seem to show any signs of letting up any time soon. What do you feel makes this such a strong time for black metal right now here in the States?

Jason: I would say black metal in general, all over the world, is sort of going through a bit of a transition phase right now. For the last decade or so it has been all about being as raw and depressive as possible, and that’s cool and all but exactly how many albums like that do you really need in your repertoire? I think it became incredibly over-saturated and everyone got a bit burnt out, and rightfully so. People want to hear something musical, fairly original and something with a bit of substance these days. Musicianship is starting to take precedence over being “kvlt” and that’s fucking grand. As for US black metal, I think the “STORM” bands are putting out some cool shit. We have a new album we just finished recording and the band Stormkeep released a black metal masterpiece last year as well.

You recently signed with Napalm Records, who have a really deep stable of bands. What has their support meant to you?

Jesse: Having a label like Napalm behind us allows our music to get in front of a lot more people. Without their far-reaching promotional abilities, our album’s exposure would have been limited more or less to people that stumble across it on YouTube or Bandcamp. We didn’t have any plans of playing gigs, forming a band, or doing much to be honest…we didn’t even have a band photo! Napalm’s interest basically gave the band life. We thought, “Well, I guess this is becoming a thing now!”

Let’s talk about Devastation on the Nation. The lineup is an incredible mix of legends and up-and-coming bands. How does it feel to get to play with bands like Rotting Christ and Borknagar and how did getting on the tour come about? What are your goals for the tour?

Jesse & Jason: Man, we’re both incredibly fucking stoked on this opportunity. We were actually in the studio recording drums and our manager, Maurizio, sent the chat a text basically saying our label mates WOLFHEART, who also rip, felt they needed to drop off the tour and get cracking on their new album. We work with Stephan from Continental Touring and brought our name up to the organizer and they said fuck it. We’re pretty stoked to be able to finally present ourselves in front of a number of people who maybe haven’t had the chance to discover us yet, and it allows us to show the world that the Storm gang isn’t fucking around.

After the tour, what’s next for the band and what are your goals for the next few years?

Jesse: Our next record will be coming out hopefully in the summer, and we might have something else lined up for later in the year. So keep your eyes and ears peeled for more Imperial Black Metal Warfare from Stormruler!