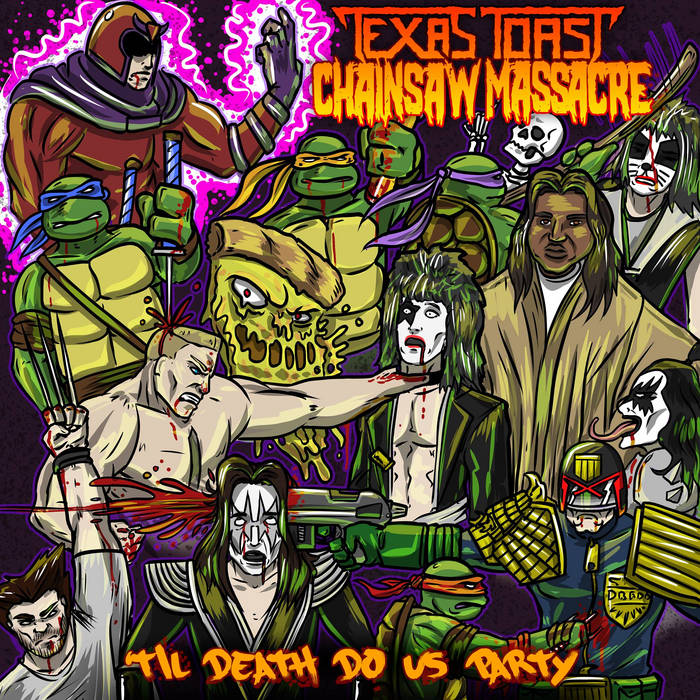 You would imagine a thrash band with the name of Texas Toast Chainsaw Massacre to have a robust sense of humor and you would be correct. The group, which has been a fixture in the Chicagoland metal scene for more than a decade now, is known for its less-than-serious lyrics and its very serious thrash skills. With songs like “Alien vs Predator vs Brown vs the Board of Education” and “Busey Up Your Ass,” you know you’re not in for a self-serious album about the condition of the human soul (unless, maybe, you actually are Gary Busey).

Other than tongue-in-cheek thrash songs, the band is known for its Toastamania shows in which various bands descend upon Chicago for a massive day of metal of all types. It’s a Chicago tradition that always packs in a huge crowd ready to see a diverse lineup of bands. Unfortunately, after these interview questions were sent off to Josh “Macho Frost” Kandich, this year’s event was cancelled due to unforeseen circumstances. I talked to Kandich about the band’s history and got the scoop on what fans can expect when Toastamania makes its glorious return in (hopefully!) 2023.

You guys have been going strong here for over a decade now. How did the band come about?

Josh: Being dumb kids in highschool (laughs). We had a notebook filled with like 100 stupid band names. We decided on that one. Figured it was a good way to stand out. Make it stupid enough and they wont forget it. Better than being like the 100th -Tion band in the metal scene.

What got you guys into metal originally and who are some of your early inspirations?

Josh: Well me personally I’ve been into metal since I was a kid, growing up in the late 90’s/early 2000’s in the heart of Nu Metal. Around seventh grade I found Metallica and then was immediately hooked on thrash metal. Our biggest inspirations are obviously Metallica as we have a bunch of parodies of them. Municipal Waste, Lich King, DRI, SOD, Descendents, Gwar are most of the big ones. We like to take our inspirations from all over the place though not just metal or even music.

You guys are part of a really strong metal scene up there. What do you think it is about the Chicagoland area that has made it a hell of an area for metal?

You guys have some of the funniest and most fun thrash songs around. How do you come up with your themes and lyrics?

Josh: (lauhs) Thank you. We just love to write about dumb shit we like. We’ll watch a movie and be like “oh man this would be a cool song,” or we’ll just be dicking around and say some stupid shit and be like “new Toast song.” We send each other stupid potential song titles all the time and we just see what sticks. A lot of it is fueled by being drunk or stoned idiots.

What’s your writing process for the music aspect of the songs? Do you have a primary writer or do you collaborate?

Josh: Depends on the song, I usually end up writing a lot of the lyrics until I get stuck and then we all brainstorm together. Jordan (Miller, lead guitar) does almost all of the instrumental writing. Now that Frank (Pena, rhythm guitar) is in the band again we’re hoping he can help us the way he helped write our first two EPs.

Like I said, your releases are always pretty damn hilarious but also feature solid thrash music. What are your goals when you set out to write/record a Texas Toast Chainsaw Massacre record?

Josh: First off we want it to be good (laughs). We always try to push ourselves further and further with writing catchy and heavy tunes. Then we focus on the fun factor. We always want to leave you wanting more.

What have you guys been up to lately? The compilation was a great collection of your first decade. What’s the plan for the next decade?

Josh: We’ve actually been working on a new full-length album for a while and it’s finally in the end phase of getting the rest of the recording done. Once it’s out we’re immediately going back into writing mode and doing either another album or an EP depending on how writing goes. Other than that we just wanna play more killer shows in killer places. We haven’t been to the west coast yet so that’s a big goal. And as always, open for GWAR.

How did Toastamania start and how excited are you for the tenth year? You’ve got a heck of a lineup that has a cool mix of legends and newer bands. Did you ever think that Toastamania would take off in the way that it has over the last decade?

Josh: Actually it’s not 10 years old! Actually only 8. Our numbering is stupid. It would actually be like the 17th Toastamania because for a while we did like 7.5 or calling it dumb shit like Survivor Series or something (laughs). A lot of people don’t know that and I don’t blame them. It’s hard to keep up even for me sometimes. We started it after we were getting annoyed that every show seemed to have the same bands over and over again. So we wanted to do something that showcases bands we wanted people to know about and it’s just snowballed. I am absolutely blown away from how far this thing has come. From being a small barbecue get-together at Jurassic Park in Chicago to having two stages at Reggies with Ghoul and Nunslaughter is ridiculous to me and we are thankful for it. We also bust our asses to make this shit happen. So it’s nice that it pays off. Unfortunately this year’s was canceled for stuff we have absolutely no control over and it’s a bummer but there’s always next year.

How important has Reggie’s been to you guys both in general and in regard to Toastamania? They’ve really been a great home to Chicago metal for years now and other than that, just a kickass concert venue.

Lastly, what are your plans for the future of Toastamania? How do you go about tweaking it every year and what is the planning process like?

Josh: Our plan is (to) always go bigger until we can’t. We just wanna strap a rocket to this thing and see how high it soars. Tweaking it is difficult because it really comes down to what contacts we have and how much time we have to work with. Our planning process is usually just us having some beers and being like “Hey you know who’s a good fucking band …. Let’s book them,” then I’ll try my best to make it happen. We always try to get a good mix of Midwest up and comers with our favorites or friends from different sides of the country tied together with one band we grew up listening to. It’s worked so far. We’ve already started planning 2023 and if everything works out, it’s going to be our biggest and best year yet.