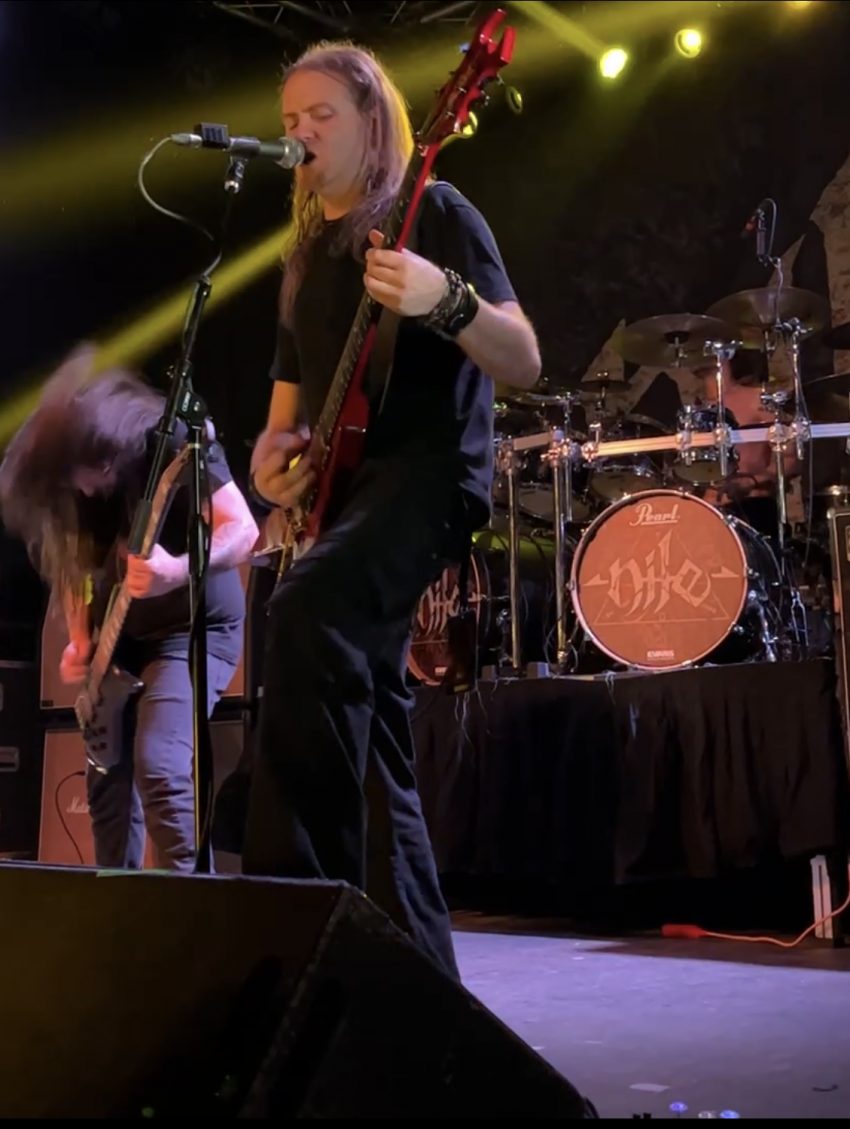 When a tour headlined by Nile and Incantation comes anywhere near you, you buy tickets and you go. There’s no two ways around that. Two of the biggest names in the genre playing on the same stage with a couple of fast rising bands in I AM and Sanguisugabogg opening? Yeah, no question about it, that’s a hell of a Saturday night however you slice it. Not that there was a single doubt about it, but The Age of Vile Divinities US Tour absolutely lived up to the lofty expectations set by the lineup alone and highlighted a lot of what makes death metal the pinnacle of metal scenes.

When you are opening for a lineup this stacked, you had better bring it and I AM goddam brought it. The Texan five-piece set the bar high for the night, blasting through a seven-song setlist that included five songs off their most recent (and best) album, “Hard 2 Kill.” The band’s brand of Texas death hit the crowd like a freight train from the get-go and started heads furiously banging from song one. Andrew Hileman is a hell of a powerful vocalist/frontman and screamed his way through the set with one of the angriest sounding vocal deliveries I’ve heard in some time. A lot of extreme metal vocalists have that deep death growl or the high-pitched demon singing style (or both) but Hileman’s voice seethed with hatred and anger as he prowled the stage over the heavy riffing laid down by his bandmates. If you’re in the market for a band that sounds like a more pissed-off version of Pantera, you could do far worse than these guys.

I AM got us all pissed off, then Sanguisugabogg came out to get us all grossed out. The band sings some of the most disgusting songs in all of death metal, which is a hell of an accomplishment when you consider the genre. On songs like “Dragged By a Truck,” “Necrosexual Deviant,” and “Gored in the Chest,” the band displayed its love of the seriously vile and disturbed along with the riffing and vocals that have made this one of the fastest rising bands in the genre. Whoever booked them on the Age of Vile Divinities US Tour definitely knew what they were doing.

Vocalist Devin Swank’s absolutely ferocious vocals paired nicely with his love of joking with the crowd and explaining his passion for indulging in necrophilia. Swank also took time to shout out various regional bands in between songs and name check other influences on the band’s sound, which was a cool bit of scene solidarity from the band. One of the absolute best things about death metal, outside of the actual music, is the way in which the bands by and large remember where they came from and why they are there. I don’t think there is a scene in music where the bands are closer to their fans. I’ve seen both the stalwarts and the upstarts of the genre working merch tables, signing autographs, taking pictures, and just generally bullshitting and hanging out with the people who have a real love of their music. Swank name-checking his peers and inspirations was a cool example of that community feeling that helps make death metal so special. I honestly feel like this band is going to be big within the genre and their talent alone makes that well deserved. The fact that they all seem like genuinely cool dudes just makes that all the more exciting.

When you think of people who have been mainstays of death metal, John McEntee rightfully should come to your mind. The mastermind and lead guitarist/vocalist behind Incantation has been doing this as long as I’ve been alive and, if the show I saw was any indication, will be doing this for quite some time yet. The band’s set Saturday night was a triumphant roar through the band’s storied discography with classic cuts like “Devoured Death,” “Nocturnal Dominium,” and “Impending Diabolical Conquest” sounding as powerful and overwhelming live as they do on the classic albums that spawned them. Of course with this being the official tour for the latest album, 2020’s wickedly good “Sect of Vile Divinities,” the new stuff was heavily represented with four songs in the 11-song setlist. No complaints were lodged from me or anyone else smashed against the barricade in the front though; that album is a triumph and more inspired than most things coming out from bands half as old as Incantation.

The full band played the show with as much energy and zest as you could want from the legends. McEntee slung riffs and vocals like a man possessed as he walked around the stage and paused at the edge at various places to look right into fan’s eyes and return devil horns. Kyle Severn, the second longest running member of the band, bashed on the drums with the precision that you’d expect from the man who has played on every album from “Diabolical Conquest” onward. Severn’s partner in the rhythm section, Chuck Sherwood, got up close and personal with the fans after the show when he leaned his bass into the audience to let those of us at the front pluck a few notes on his axe. It was a cool way to reach out to the fans and make a connection. McEntee, Sherwood, and newest band member Luke Shively also walked around tossing picks and setlists into the crowd for a good while after the show while the techs switched gear around for Nile’s set. The ending of the show demonstrated that this is a band that knows why they’re still beloved and that wants to show that that love and respect is a two-way street.

You can put any thoughts of it being time for Anubis to come and ferry Karl Sanders and Nile to the Underworld out of your head. Though it’s been some time since the band went on a tour, there didn’t seem to be any stage rust when I saw them headline. The band took the stage to a thunderous reception and proceeded to work their way through a 13-song setlist that included a song from every studio album except “Ithyphallic.” Sanders, complete with wild, spiky guitar straps that would send me to the hospital if I tried to wear them, played a hell of a set while sharing vocal duties with bassist Brad Parris and Vital Remains frontman/guitarist Scott Eames, who filled in on the tour for regular shredder Brian Kingsland, who was taking time off due to the birth of his son. Eames integrated himself into the band as expertly as you’d expect and there wasn’t a step lost in the vocals/riff department from his end.

The band’s tour is in support of the newest album, “Vile Nilotic Rites,” and the three cuts they played off the record (“Long Shadows of Dread,” “Snake Pit Mating Frenzy,” and “Vile Nilotic Rites”) were all killer tracks live. The album as a whole is great so it was exciting to finally get to see the songs from the 2019 record live. All three axemen handled mic duties admirably both during the songs and between. Anyone even half paying attention could easily tell that the guys were having a total blast up there and were thankful to finally be able to hit the road and get back to kicking ass with the fans. Sanders and Parris goofed around a bit during extended jams and between songs (never to the detriment of the music) and Eames grinned ear to ear through much of the set. Behind the kit, longtime drummer George Kollias was as steady as he’s always been.

Nile is a unique and special band within the death metal genre. Their blend of tech death with brutal death riffing mixes incredibly well with the Egyptian and Lovecraft inspired lyrics. If you listen through their discography (and if you haven’t, get your shit together and do so now!), they’re a band that has never strayed from the path they’ve carved for themselves but they’ve never stagnated either. I truly don’t think they have a bad record in their catalogue and any time they release new music, it’s a stop what you’re doing and pay attention kind of deal. If you get the chance to see them live, particularly on any of the remaining Age of Vile Divinities US Tour dates, you know damn well what to do. You’ll thank Horus that you saw them.