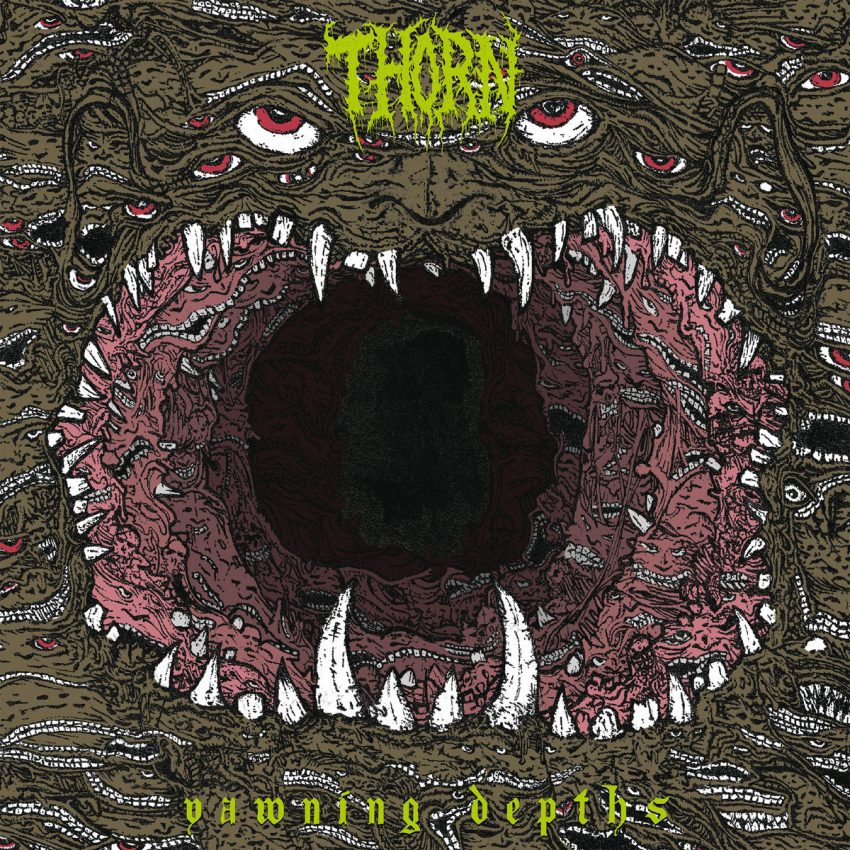 Much like the cover of the band’s second LP, this year’s Yawning Depths, to listen to Thorn is to descend into the gaping maw of doom-drenched death. The band, which is the brainchild of Brennen Westermeyer of grindcore band Fluids, has been on a tear since Westermeyer formed the one-man group in 2019. Since its inception, Thorn has put out multiple splits, an EP, and two full-lengths. That Westermeyer handles all the instrumentation and writing on the releases himself makes the prolific output all the more impressive.

For those who haven’t heard anything by the band, Thorn is a hell of a death metal act that incorporates aspects of doom into the mix to create an incredibly ominous and heavy sound. Anyone looking to be overwhelmed by the dark depths of the heavier side of life should start with the band’s 2020 EP, The Encompassing Nothing, and work their way through to Yawning Depths. It’s a wild death ride through varied and thoroughly inspired releases. Westermeyer was kind enough to cut some time out of his ridiculously busy schedule to chat with us about the darkness of Thorn.

How did Thorn come about? Between Thorn and Fluids, I cannot imagine how busy you must be with music alone, not to mention life outside of it. What made you want to tackle a death metal project on your own?

Thorn came about from the desire to start a new band. I initially was opting for a full line-up, but decided to just do it myself, so I can release music as regularly as possible. I had some riffs floating around that I didn’t want to use for my other bands, but I wanted to get them recorded and released. So I did everything myself in November 2019, got the songs mixed, so I could put them onto the internet to see how they’re received. Gurgling Gore found Thorn and offered to put the songs on tape, and the ball got rolling from there. I didn’t really anticipate Thorn would get noticed the way it did, but I want to release music as quick as I write it to keep the gravy train rollin’.

How do you come up with your lyrics for Thorn? With Fluids, you seem to be going for more fun stabs at satire and here the lyrics are much more foreboding and sinister.

I’d say that’s a pretty keen assessment. I aim for the thematics of Thorn to be very brooding and ominous. Lyrics usually about pagan religions, lore, dread, and just all things spooky that I have a personal interest in. Fluids content usually leans more towards my sense of humor, and squeezing in some gore imagery to tie it all in. Luckily, Jan (Grotle) & Walter (Hale) have a pretty similar sense of humor to me, so I like to think (of) the band as a fully functioning tricycle of goofballs.

Being a solo project, have you found that to be more of a challenge than working in a full band or more freeing? To you, what are the pros/cons of taking it all on by yourself?

I’d say the pros are being able to operate at my own pace. Writing a handful of songs, and sitting on them for months, or even years, is a frustrating process for me. So with Thorn, I have the ability to demo out some songs in a short period of time, flesh them out at my own pace and add onto them, and turn them around soon after.

While I consider that a pro, the con is that ideas are often restricted to only my brain until getting them mixed and mastered. I usually prefer working by myself, but I know I’d benefit from an outside perspective.

What’re your musical influences with Thorn and how did you initially get into extreme metal as a genre?

I enjoy death metal the most these days, but I take a lot of influence from other extreme genres, as well as post-rock with lots of melody/atmospheric. I try to draw influences from the entire spectrum, so I don’t constrain myself to a particular sound, and not getting stuck in a box of worrying if it sounds “death-metal enough.” I got into heavy music with some of the radio friendly metal out there like Slipknot, System of a Down, and the other nu-metal that was aplenty in the late 90’s and early 2000’s. Sorry to say I didn’t immediately land on death metal, like most people would want to hear. But it started with those bands, and the desire for heavier and heavier music kept growing. Some of the first bands I ever got into were The Black Dahlia Murder, Deicide, and Cattle Decap, and then I started really diving into death metal from there.

There is some really great death metal and extreme music in general coming out of Arizona right now. What do you think it is about the state/climate/scene there that’s producing fresh and exciting bands with a taste for the extreme?

Hard to pinpoint exactly, but I’m assuming the AZDM community/scene. The guys and gals are very accepting of anyone as long as they like death-metal, so I think that allows an environment for people to want to participate and contribute to it. Either that, or the sweltering heat between April to October constantly invokes death imagery in the minds of more citizens per capita than the average state.

In three years, you’ve put out an EP and two full-lengths as a solo band. What’s your creative process like and how do you find the time to keep the train rolling along so consistently?

I will write a handful of songs in about 2 weeks in demo recordings. (Whittle) down the best songs/riffs and then fine-tune from there. With the demos, continue to write layer by layer of the songs until I have a final written product. For my two other side projects, Paranoia Apparition and Crux, I have a full band to work with which really streamlines the creativity outputs from the other guys involved.

For the new album, it definitely has the feel of a Thorn record but it sounds more atmospheric in spots than the previous releases. Was that a conscious decision and, if so, what made you want to add some different elements here? How did you achieve that type of sound on this record?

For each release, I take the ideas that I like from previous albums, and try to crank it up. I try to go further on each side of the spectrum: more heavy, and more melodic. For example, I liked the idea of a short song that comes in fast, and ends with a strong melody. “Judgement’s Throne” from Yawning Depths is the flip side of the coin from (how) “Drowned Serpents” was written. Each of those two songs has a very different mood to it, but they have similar skeletons.

Every one of your albums has a totally unique and completely striking cover, with Yawning Depths being my personal favorite so far. What’s the process of getting these awesome covers?

Not much to it besides hiring an artist and asking them to make it better than I describe it. SvchIsLife and DrollMeadow both can flesh out illustrations better than what I envisioned.

Finally, what’s coming up next for Thorn? It doesn’t seem like you’ve got any intentions of slowing down any time soon so what can we expect from the band in the near future?

LP3 later in 2022, if all goes as planned. And a 4 way split with some other bands. Hopefully more, but the gears are in motion for each of those releases, so that much I can guarantee.