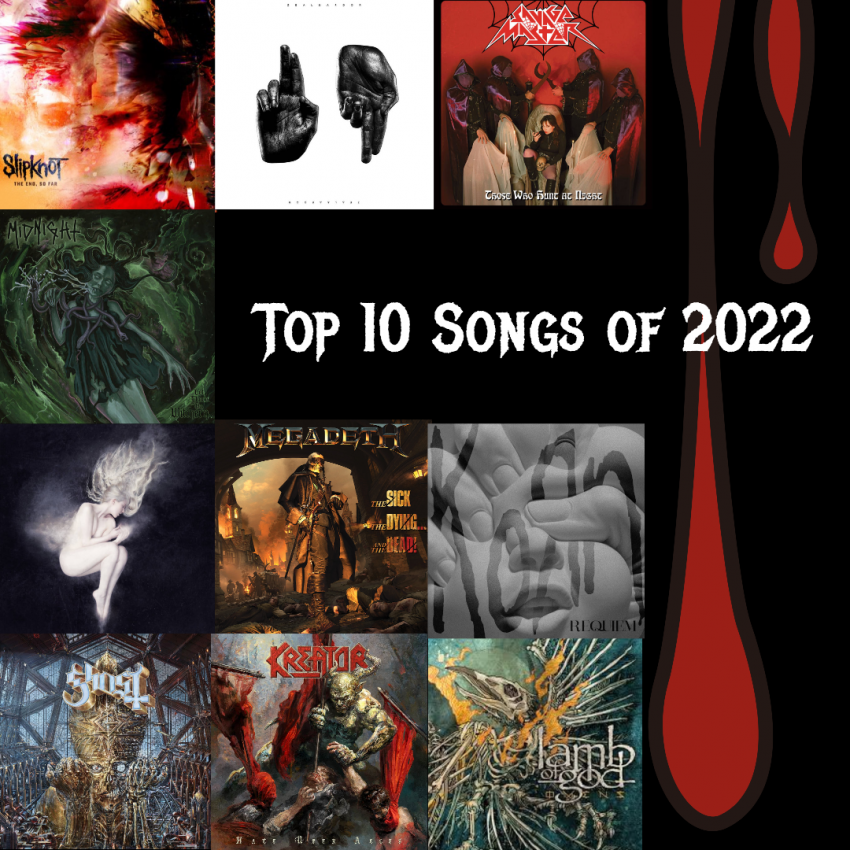 Trying to tackle a top ten list of songs is a lot more work than it sounds like it should be at first, but then you take into consideration the sheer number of songs that were released in 2022. Even when a parameter is set, considering we’re called Metal Plague, that it should be in the broad genre of metal, it’s still a lot of hours of music to sort through.

Below may seem an odd assortment of songs, but that’s art! Art, especially music, can fill so many holes in a person’s heart. Some pieces act as bits of social or political commentary, while others provide an introspective outlet for the creator and a connection for the listener, who might no longer feel so alone when listening to the song. Others fill the need of just being a great freaking metal song.

You want a thrash masterpiece? A thrashterpiece? Teutonic thrash-masters Kreator have got you with “Hate Über Alles.” With the final line of every chorus being “Hate is the virus of this world,” it’s fairly clear what the band is singing about. Even if you don’t want to dive into a social-political discussion to dissect possible meanings or inspirations for the lyrics, this song still just rips. The music is a pounding, aggressive three-minutes-and-48 second assault and we’re all better for it.

Jonathan Davis has always had an ability to write what feel like incredibly personal lyrics that are very easy to empathize with, and “Start the Healing” is no different. With lyrics like “Looking at a soul, it’s broken and strain” could describe so many people who turn to music for relief in their lives, whether they’re escaping mental illness, bad home lives, sickness, or past regrets. Requiem is a good album, especially for a band on their 14th studio album, but “Start the Healing” is definitely the stand-out song. The group manages to sound both reminiscent of their earlier nu-metal output while also still growing and evolving.

Remember what I said above about how sometimes a song just needs to be some great metal? See Midnight’s song “Szex Witchery” off their latest, Let There Be Witchery. Sometimes there just needs to be some sleaze involved in the genre and Midnight seems happy to fill the void. Take some sleaze, add some darker elements that would piss off a lot of Christians in addition to all the carnal pleasures, and you’ve got “Szex Witchery!”

The second track off “Nova” starts strong with an energetic riff where you don’t really know where it’s going. It almost chameleon-like and could fit in a more broad “rock” or even a heavier pop song. Then, Sylvaine’s harsh black metal vocals kick in and you know you’re in for a ride like no other. The near 10-minute track takes you on a haunting journey, and the artist showcases her impressive singing abilities navigating a black metal shriek and beautiful clean vocals.

For me, personally, Megadeth’s discography is a mixed bag, to say the least. There are some huge highs and some steeper lows than some other bands. The title track off of their new album, The Sick, the Dying . . . And the Dead! proves that Mustaine still has it! The track begins with the cries of “Bring out your dead!” by a plague doctor that you can imagine walking through infected streets. While the imagery Mustaine creates with the lyrics (“It was the fleas onboard that bit infected rats” sets a setting more historical than current, there’s something about the phrase “The sick, the dying, and the dead” that seems almost too apropos for the worldwide pandemic we are still currently battling.

On “Death to the Holy” off the self-titled album, the band fuses a mix of African American spirituals, blues, and metal in what the lead mastermind Manuel Gagneux described as the “most Zeal & Ardor song on the record.” The combination lends to an irresistible and completely captivating listening experience. Plus, it’s perfect song for the holidays to play at any family gatherings, and if your extended family leans more to the religious conservative side, you may not be invited back!

“I don’t give a goddamn / About your demands!” Randy Blythe screams on the track off the band’s latest album, Omens. Blythe sounds as angry and pissed-off as ever on a pounding and raw track that talks about lying face down “in a ditch that you dug yourself.” It obviously comes as no surprise for Lamb of God to release songs of socio-political commentary (“Home of the brave and the terrified”), but the track can work on a micro level as well. It’s a relentless head-banger of a track that can help release the pent up anger in a soul. The band members are all firing on all cylinders on this one.

“Hunt at Night,” off the band’s fourth LP, Those Who Hunt at Night, is a song that is striking in that it is completely timeless. Savage Master always keeps a classic heavy metal sound and this track is no different. While the band never sounds dated, you could tell me this song was released 35 years ago and I’d roll with it (if I didn’t know any better that is!). Rhythmic beats start the song, then the riff starts and Stacey Savage’s powerful vocals kick in; this song has almost an effortless feel as it’s performed by a band that is completely in control of what they’re doing four albums in. I’m also always a sucker for gang vocals, and the shouts of “Hunt! Hunt! Hunt!” by the band in the background of Savage’s lyrics about taking victims to her lair make for a fun time.

“Kaisarion” is a perfect encapsulation of our crumbling society in the United States and around the world. The song continues Forge’s tradition of catchy, accessible music to intrigue a broad range of listeners. It starts straight-off talking about an empire built on ashes of the old. The lines, “It’s the sound of another deadline / Whistling past your ears / It’s the sight of a million regrets / Mounting over years” seems to be, at least to this listener, an obvious commentary on humanity knowingly ignoring the climate disaster for far too long to be able to rectify it now. Other lyrics about bishops and choir boys and “righteous dogmas” hiding “the Handmaid’s tale” are poppy take-downs of the Christian, religious rule in Western civilization.

When Slipknot is on, they’re on. They’re a group that has a fantastic ability to make a great metal song that acts as an entry point for many listeners to move on to heavier music and “The Dying Song” is a perfect example of that. The song off their latest release, The End, So Far begins with Corey Taylor’s clean vocals and after screams of “Die! Die!” goes into his trademark faster, harsher, growling voice. The song encapsulates all the great things about Slipknot: simultaneously vitriolic music and lyrics while also being incredibly catchy, along with themes like hopelessness, suffering, and Satan. In addition to being a great gateway band, Slipknot has always had a knack of choosing fantastic singles and this one is no different.