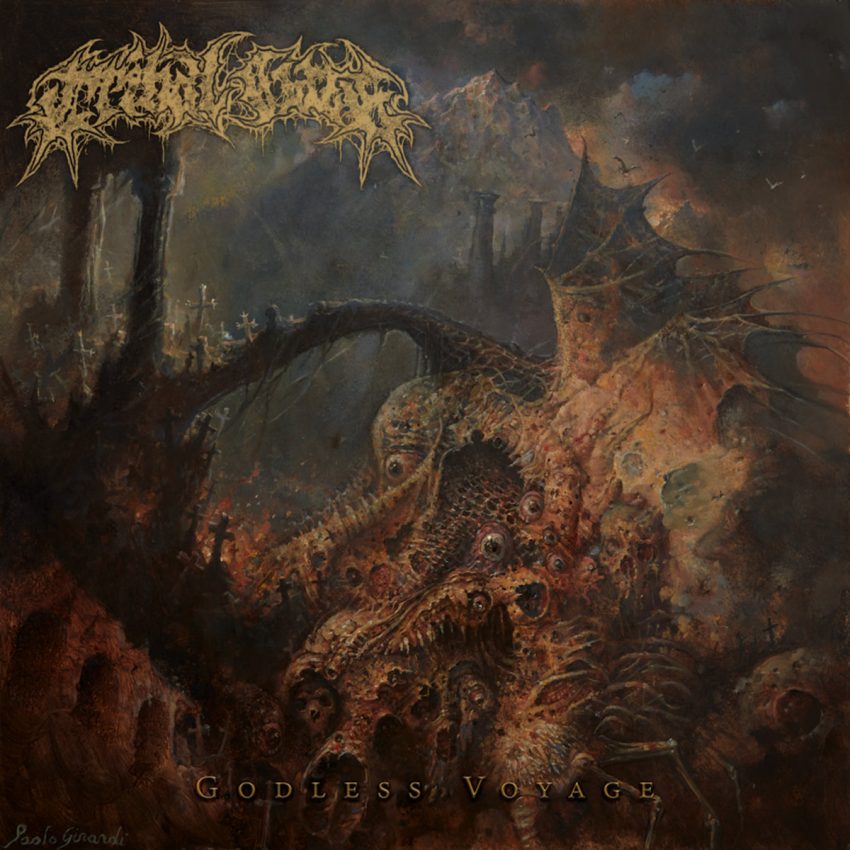 It shouldn’t be any shock to anyone who has even half ass paid attention to extreme metal over the last chunk of years that Texas is one hell of a fertile breeding ground for new and exciting bands. Within the massive confines of the state, there are a variety of different scenes spread throughout providing fans with a taste for the extreme a wide range of thrilling bands across all kinds of different genres. If the saying goes that things are bigger in Texas, that statement is a truism when it comes to extreme bands. Not that you really need more proof, but if you do, Tribal Gaze is a great place to look.

Formed in 2020, Tribal Gaze is still a band in its infancy. With only one EP, 2021’s Godless Voyage, and one split to their name, the band is still defining itself and its sound. If their debut EP is any indication, it should be a definite achievement when the band drops its first LP later this year. I caught up with the group recently to talk about how they formed and what the incredibly bright future looks like for Tribal Gaze.

TG: During the pandemic we bought some recording equipment and just wanted to just sit at home and write music if we were going to be stuck inside for who knows how long. Then a side hobby turned into a huge project whenever the release went well with Desert Wastelands (Productions).

What makes this group work so well together? I know you’ve only been around a short time but it really feels like the group has a strong, cohesive core.

TG: All of us except Ceez (Cesar De Los Santos), our drummer, have been friends since we were 14 so the four of us have just been close for a long time. It just made sense to make music with the closest people we know. Finding Ceez was a miracle because he fits in like he’s been with us this whole past decade.

What got you guys into death metal in general and what about the genre appeals to you? Who are some of your big influences?

TG: Really Obituary, Death, and Morbid Angel were kind of my gateway, I’ve always been a fan of aggressive music so when I found those (three) bands it grabbed me right away. I think now that we’ve got our foot in the death metal door it’s important to grab influence from non-death metal bands. Iron Age, Mammoth Grinder and Crowbar are probably my main influences.

How do you guys write the music for the songs? Has that process changed at all?

TG: For the most part we all have studio gear so we will work on our demos separately and bring them to practice and catch everyone up with whatever ideas we have for the songs and go from there.

How do you come up with the lyrics? Is there a process that you use to get the words flowing? What are the themes you most like to write about and why?

TG: Since day one our main lyrical content has consisted of mistrust for organized religions. Not an uncommon topic for death metal but what makes our lyrics fun is that we tend to write things in a fictional way that blend storytelling and getting a point across so it leaves room for creativity as opposed to just being angry about religion.

What was the writing/recording process like for the debut EP, Godless Voyage? What did you learn about the process of making a record through that that you will use in future records? How do you feel about the final product?

TG:Godless Voyage was a big trial and error thing for months. We were new to using recording software and having the ability to record songs as you’re writing can sometimes leave the writing process too open. So the ability to constantly change a song’s structure can be tempting but we learned a lot about the importance of finalizing songs, not over thinking, and just writing what we enjoy hearing.

The cover for that debut is really cool! Who did it and how much direction did you give them? What does that cover represent to you?

TG: Paolo Girardi is a legend and has been for some time. Growing up near Dallas, Power Trip was a huge inspiration to us growing up so we thought it would be cool to have our first EP done by the same guy who made their legendary album covers.

Are there plans for a full-length in the future and, if so, how’s that process going? Can you tell us anything about it?

TG: We are actually wrapping up all of the final tracking this week and I believe the full-length will be out this summer.

How affected was the band by the COVID pandemic, either in terms of getting music recorded or playing live?

TG: Honestly, COVID impacted the band tremendously. Without that time of uncertainty, we may have never got into the mindset of being a part of a music scene again. We had all drifted into a life of just work with no real projects so it got us realizing we needed to make the most out of life and go for something, even if only just a fun project to enjoy with our friends.

Texas has really been producing a ton of great death metal over the last chunk of years. What’s the local scene been like for you and what is it about your home state that makes it such a fertile ground for extreme music?

TG: Texas has always had inspiring bands. It’s a domino effect. You see a band from your area kick ass, it makes you want to make the best music you can and bring it to the table of Texas bands. Maybe someone likes what you’ve done and it makes them want to add to the table. Texas is big so the table has plenty of room. We are fortunate to live in DFW (Dallas-Fort Worth) where hardcore and metal shows are energetic, very supportive, and very active.

Lastly, what’s next for Tribal Gaze? What are your goals for the future of the band?

TG: We have a very exciting announcement that we won’t get to make for a few months but it is a very cool opportunity and we think everyone will be stoked.