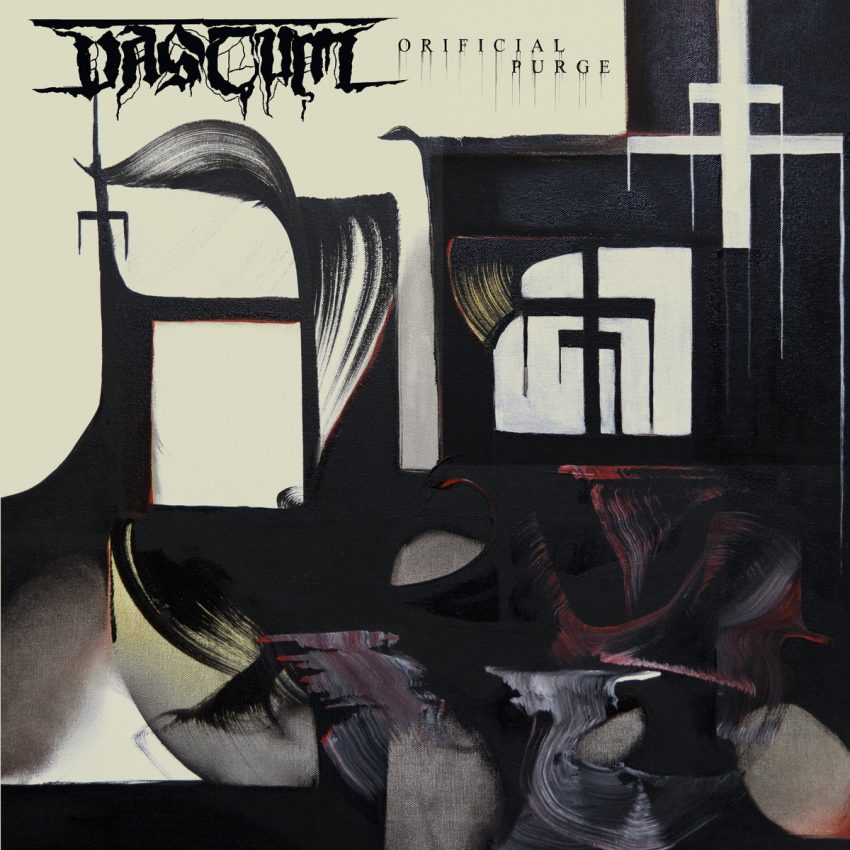 For anyone with even a cursory knowledge of metal history, it shouldn’t be a shock that the San Francisco Bay Area is still pumping out great bands. When you talk about important scenes or locations in metal history, the Bay is really one of the top ones that has to come to mind. Although the area is probably initially known for thrash bands like Metallica and Exodus, it’s a fertile breeding ground for groups of all different genres. One such band that you should have heard about if you’re into death metal is Vastum.

Formed in 2009 by a group of very talented and very busy musicians, Vastum has been putting out quality death records for more than a decade now. Across four full-lengths, Vastum has defined its style of death metal with dark, heavy music and introspective and highly boundary-pushing lyrics. I recently chatted to guitarist/vocalist/founding member Leila Abdul-Rauf about the band’s history and what fans can look forward to coming up.

First off, how did the band get started? What made you all want to form a band playing this style of music?
Leila: Vastum formed in late 2009/early 2010 with Dan (Butler, vocals), Kyle (House, guitars), Luca (Indrio, bass), RD (Davies, drums) and me. My previous band Saros had just disbanded and Dan, Kyle and Luca were already doing Acephalix for some years. We wanted to play raw, disgusting, mid-paced death metal but with a slower, darker vibe. We were all listening to a lot of Finndeath and OSDM at the time so that was a starting point, but we infused other elements of doom and American death bands and our own sound took shape from there. The lineup has changed over the past decade with just Dan and me as the original members, with Shelby (Lermo from Ulthar, guitars) joining before Hole Below and then Chad (Gailey from Necrot and Mortuous, drums). Now we have Colin (Tarvin) from Mortuous and Acephalix playing bass with us for the shows coming up in 2022.

What got you into death metal in the first place and who are some of your big influences?
Leila: I was already into bands like Death, Carcass, Deicide and Cannibal Corpse back in the 90s, and then I discovered the Swedish death bands like Grave and Dismember in the late 90s/early 00s. Dan and Kyle were a big influence when we started Vastum and got me into the Finnish bands as well as a lot of death doom.

The band seems to have had a mostly pretty consistent lineup for a while now. When there are openings, what do you look for in a potential member?
Leila: Well, the lineup just changed again with a different bass player. We try to look for people who have the right combination of talent, stage presence, tone and ability to commit their time to the band, as well as personal chemistry and camaraderie with everyone in the band.

With so many different bands going at once, how do you balance them all? How important is it as a musician for you to have those different outlets where you can explore different avenues of creativity?
Leila: It’s absolutely crucial for me for a number of reasons, a practical one being that everyone is so busy that I need to have several projects in order to be consistently writing and playing music or I’d be dead in the water. Creatively speaking, I need several outlets to express a wide range of musical interests, not just death metal. So it’s not even a balancing act because one project is never going consistently all the time.

What’s the music writing process like for the band? Has it changed at all over the years?
Leila: It’s stayed relatively the same over the last 12 years. One of us usually brings a complete song to the band and everyone else learns it. For the first two albums it was Kyle, Luca and me each bringing in our own songs but since then it’s been Shelby and me writing 50% of each album. Dan also gives a lot of input into song arrangements so there is some collaboration. I’m hoping for the next album to be even more collaborative.

What is the lyric writing process like? Do you have any particular inspirations that you use when writing those? The lyrics are always fascinating to me and I love that the group doesn’t shy away from dark material. What, thematically and lyrically, makes a Vastum song in your opinion?
Leila: Dan and I split lyric-writing in such a way that we each write all the lyrics for one song, and when it’s time to record a new album, we spend time together dividing up the lyrics so that both of our voices are equally represented on each song. I guess you can say that is our concrete process in the practical sense. I don’t think I can really pinpoint my own abstract creative process and what moves me to write. I usually write lyrics for the songs I write the music to – it just feels natural for me to do so – and the music is usually in place before the lyrics. Sometimes the evilness of the riffs alone puts me in the right state of mind to write lyrics, or sometimes it just takes me thinking about the most horrible thing I can think of, and the words start to flow on the page. Dreams, eroticism, violence, vague memories, dissociation, inchoate emotions, visceral or somatic states, experiences in meditation and psychoanalysis – these are our sources of inspiration. Certain forms of literature (philosophy, mysticism, psychoanalysis) are also huge sources of inspiration.

How do you feel you’ve grown as a band over your releases? Do you feel more confident in getting what you want accomplished now when you step into the studio with multiple full-lengths under your belts?
Leila: In some ways, yes, but more so because we’ve all been doing bands for a very long time even outside of Vastum (I’ve personally been making records for 30 years!) so we all feel very much at home in the studio. With the first four albums, there was definitely a “tried-and-true” formula we were using that I plan to abandon on this next record. So I think this next record will be a challenge in a way that the previous ones weren’t, in terms of song arrangement and overall creative direction.

The most recent LP, Orificial Purge, is another fine addition to the discography. What was the writing/recording process like for that one and what was your goal with that fourth record?
Leila: Thanks. Firstly, I feel that vocally Dan and I outdid ourselves on that record both in process and performance: the process was more collaborative so that both of our voices were heard almost equally in every song, and I think we did a good job of using a wider pitch and character range. Also, Shelby, Chad and I spent a lot of time preparing for Orificial Purge ahead of time and demoed the tracks before we went into the studio, which we hadn’t done as much with the previous albums, so it made the recording process much smoother. All five of us were involved in the mixing process, which was a challenge but great in that everyone had a voice in the end result. I also knew I wanted my Ionophore bandmate, Ryan Honaker, on the album to make it more atmospheric so I wrote a string part for him to play at the beginning of “His Sapphic Longing” on which he recorded some ambient textures with me as well.

The band always has really cool covers but you’re unique in that each of them really feels like a totally different style. Who does them and how much direction do you give them?
Leila: Thank you. Dan created the covers for the first 3 albums (except for the CD version of Patricidal Lust, which was painted by Paolo Girardi) but San Francisco artist Laina Terpstra painted the cover for Orificial Purge which I thought was amazing and a big departure from our earlier covers. I think the fact that it wasn’t a stereotypical DM piece of art made it challenging for some people, and drew extreme reactions on both sides, which I think is great. Dan is usually the one to give outside artists at least some creative direction, as his visual esthetic vision is crucial to the band, both when it comes to our merch designs and overall album concepts.

How affected was the band by the pandemic? Did it hinder getting music recorded or any live plans?
Leila: Since COVID, Shelby moved to the east coast but the rest of us are still in the San Francisco Bay Area. We had a Pacific Northwest tour booked in March 2020 that was canceled, and otherwise have been laying low since (I did play a solo show last year however). We’re still trying to figure out a recording schedule for Album five, which will be a challenge with us being spread out. But the lockdown gave Shelby and I an opportunity to keep writing over the past year and now (we) have just about all of the new songs written. Live performances, on the other hand, have been relatively easy to organize if promoters have the budget to cover our travel costs and guarantee.

Your area out there in California has always had a strong metal scene. What’s the scene been like for you and how much does the support of your local music community mean to you?
Leila: The underground metal scene is what brought me to the Bay Area in 2003 (I’m originally from New Jersey), and it seems like it just keeps growing with the younger generation of bands, with even greater diversity, while the older established bands are still active too. It’s definitely the kind of place where once you establish yourself, the scene becomes your family. My perspective is unique since I also play in the experimental, ambient and electronic scenes which are also really supportive, and have just as rich a history here as the metal scene, since we have Mills College in Oakland and a lot of their graduates start projects that perform often. The Bay Area music scene is so vast that it seems almost every time I play a show I discover yet another scene or crew of people that I’ve never met before, which you can’t say about many places in the world.

Lastly, what’s next for Vastum? What can fans look forward to from the band coming up?
Leila: We’re back to playing live shows again and have a few coming up before we record the next album: