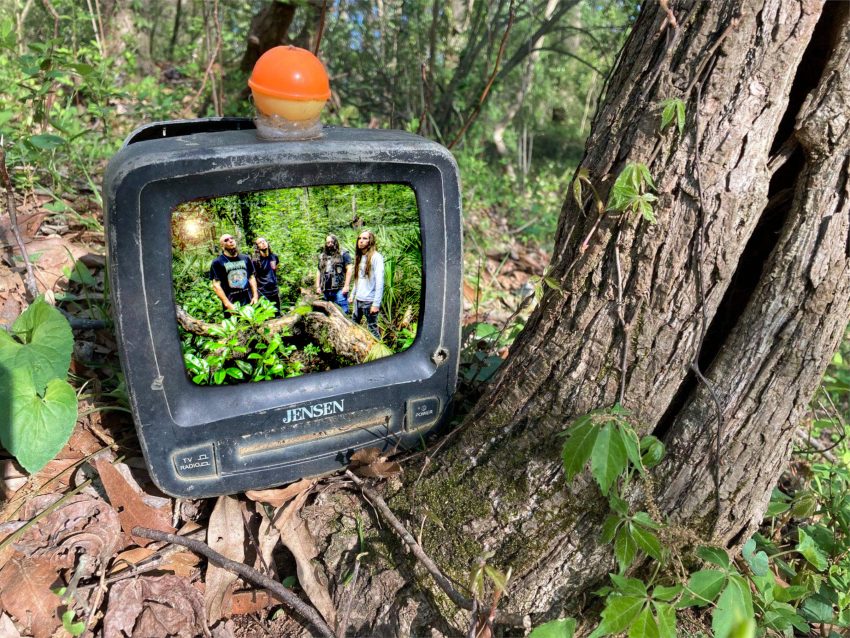 Wharflurch, which formed in Florida in 2019, does not have the output of a band that’s only three years old. They might have just one full-length to their name, 2021’s Psychedelic Realms ov Hell, but through that record, along with three EPs, three splits, multiple compilation appearances, and a live album, Warflurch has more than made their mark on the extreme metal landscape with their blend of death and doom. The band’s strong underground following has made them one of the more exciting acts in extreme metal at the moment and one that feels destined to break out to a wider audience at any point.

The band is, like most death metal acts, inspired by the same types of horror movies that end up providing material for everyone from Cannibal Corpse to your cousin’s local slam act. Where Wharflurch diverges is their inclusion of psychedelic imagery and themes amongst the sci-fi and horror elements. It’s a cool mix that definitely takes the listener to places that your typical death metal band doesn’t always travel to. I recently talked with founding member Myk Colby about the group’s history and what makes Wharflurch one of the most original bands on the scene right now.

I always like to start with getting the origin story of the band so how did you guys meet and decide to form a band? How did you come up with the name?

Myk Colby: John Mamo and I have been doing a bunch ov bands together for awhile now, and he had been lending in vocals along with his drumming duties for awhile, so we decided we should start a band where he was JUST the singer.  I spent a long time trying to come up with a name that would not only inspire otherworldly horror, but also be something that when you google it, NOTHING else comes up at all!

What got you guys into extreme metal in the first place? Who are some of your big influences?

Myk: For me it was the satanic panic ov the ’80s and everything that went with it:  Slayer, Venom, Celtic Frost, Black Sabbath, all that good stuff.  As far as influences for this band, for me personally, I gotta say Vanhelgd, Necros Christos, Obituary, Demelich, and stuff like that.

You guys have had a really consistent lineup so far. What keeps this group together and what is it about this particular group of people that works so well together?

Myk: We all just get along quite well personally, and our interests are different but intersectional, so it’s always fun to hang.  Also, THE RIFFS is what keeps us alive and motivated, so we share fellowship in that.

What’s the writing process like for the music side of things? Has that changed at all over the years?

Myk: Yeah, it kinda started with me just writing everything, but since we’ve been practicing so much (twice a week) for so long, we just end up writing new stuff at the shed while we’re together. It’s more fun that way, but I still sometimes just write and demo something out in the home studio setup to expedite the process.

What’s the lyric writing process like? You guys have such cool, trippy lyrics that play with a lot of themes of cosmic horror. As far as subject matter, what do you feel makes a solid Wharflurch song?

Myk: Me and Mamo write lyrics together a lot these days, and we did somewhat for the full-length album as well, but sometimes it’s just me or just him.  We definitely ride hard for science fiction/horror vibes, so that just permeates the music. Not really trying to rehash a slasher flick with gory lyrics…I like that stuff, don’t get me wrong, but there’s plenty out there and I feel we have something else to offer.

Just since 2020, you guys have put out a ton of different material. What’s fueling the creative fire for you guys right now and leading to you getting so much material recorded?

Myk: We just are obsessed with writing new stuff and playing and it just ends up that we’re super productive pretty much all the time. It’s a lot ov fun, that’s probably why.

What was the recording/writing process like for the first LP? Were there any challenges to getting your sound down and creating your first full-length? How do you feel about the final product?

Myk: Half the LP was written with the whole band, and half I wrote in my studio, where we recorded everything, except for Steve’s solos, he recorded those at his place.  The only real challenge for me was getting the mix just right; I had done a few mixes and they weren’t quite landing where I wanted them to, but they were very close. I brought it all in to John Howard at Warhouse Studios here in Gainesville, and he helped me get it dialed in (and saved me from a mental breakdown). The final product, I’m very very happy with, especially now that the vinyl is about to see the light ov day!

Psychedelic Realms ov Hell has such a cool, memorable cover. Who did it and how much direction did you give them? What does that cover represent to you?

Myk: Thanks!  We had our buddy Lucas Valtenbergs do the art, formerly known as Rusted Winds, and really I just kinda explained the story ov the album to him, and made a mockup primitive drawing to indicate how I kinda wanted it laid out, and he just went crazy!  It’s certainly his most grand piece to date, if I do say so myself!  It represents the story ov the album, the concept ov descending into psychedelic madness which is actually you becoming one with the universe.

Has the COVID pandemic affected the band, either in terms of getting music recorded or for live plans?

Myk: Yeah, we couldn’t play live for so long that we wrote a ton ov songs and recorded a bunch ov them and got to be really tight as a band. It’s been great!

Have you gotten a chance to play the new material live yet?

Myk: Yeah, we did a little tour with MAUL and WRITHING SHADOWS earlier this year, and we played about half the album, one older song, and some brand new stuff that no one had heard yet.  Getting to really get out and play shows was great, the people were amazing, so many old and new friends made the trip to see us and we couldn’t be more grateful for our incredible luck!  I just want to tour forever.

What’s your local scene like down there? Has it shaped or helped develop the band in any way

Myk: The scene here is cool in that everyone just kinda does what they want, there’s no particular niche that takes over too much, except for the hold out pop-punk/No Idea/Fest stuff that just never seems to go away.

Lastly, what’s next for Wharflurch? What are your goals for the future of the band?